The Noble and The Eloquent Dead

(by John B. Dwyer, AmericanThinker.com) –

“Memory  n.  1. The mental faculty of retaining and recalling past experience; the ability to remember.  2. An act or instance of remembrance; a recollection… see smer in Appendix.”   “smer – to remember.  In Germanic murnon, to remember sorrowfully, in Old English murnan, to mourn.”

Memorial Day was originally called Decoration Day.  Three years after the Civil War ended the Grand Army of the Republic, an organization of Union veterans led by Major General John A. Logan, established it as a day for decorating the graves of the war dead. In May 1868 the first major observance was held at Arlington National Cemetery.  However, towns in both the North and the South such as Waterloo, NY and Columbus, GA claimed to have been first to commemorate their fallen soldiers.  Who was first is of no consequence, only that they were united in their desire to honor them.  On May 30, 1870 Maj. Gen. Logan gave an oration towards the end of which he said:  “Let us then all unite in the solemn feelings of the hour, and tender with our flowers the warmest sympathies of our souls!  Let us revive our patriotism and strengthen our loyalty by the example of the noble dead around us.”

And the eloquent dead.   With resonant clarity they speak to us about valor and self-sacrifice, loyalty and perseverance. 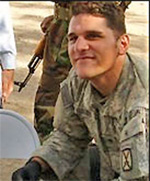 Bronx born Corporal Angelo J. Vaccaro served as a medic with 3rd Platoon, A Company in the famed “Chosin” 1st Battalion, 32nd Infantry of the 10th Mountain Division in Afghanistan.  He had been a troubled youth with drug and gang problems before his brother Ray, an Army veteran, took him to the local recruiter.  Angelo enlisted as a combat medic in 2004.  As with other young men in similar situations, the Army gave his life purpose and meaning.

“After deployment to Afghanistan’s rugged northeast region (2006), Cpl. Vaccaro participated in a number of operations throughout the Peche River, Watarprpur and Korengal valleys.  He participated in more than 40 mounted (vehicular) and well over 100 dismounted patrols.”  So wrote VFW communications director Jerry Newberry in a 16 Oct. 2006 post at townhall.com.  In a June firefight  Vaccaro’s 3rd Platoon came under heavy fire and sustained casualties.   Though wounded himself and under heavy enemy fire, Vaccaro “ran to assist the most seriously wounded soldier, covering him with his own body while returning suppressive fire towards the enemy.  Still under fire, he dragged the wounded soldier to a safe area and began treating him before moving to tend to the others.  In another operation, Vaccaro evacuated three wounded soldiers from a 7500 hundred ft. ridgeline, carrying them one-by-one over his shoulder out of the line of fire, treating and stabilizing them while the firefight continued.”

These acts resulted in Cpl. Vaccaro being awarded the Silver Star.

Then came October 13, 2006.  By that time Vaccaro was a senior medic stationed at the Korengal Outpost tactical operations center.  News reached him that his unit was engaged in heavy combat with enemy forces and had suffered casualties.  As Jerry Newberry relates:

“He immediately volunteered to leave the outpost and help conduct an extremely dangerous ground extraction despite clear and immediate intelligence that the effort would be vulnerable to enemy attack.  As he arrived at the scene of the engagement and began attempting casualty evacuation, he was struck by hostile fire and killed instantly. ”

This selfless heroism earned him a second, posthumous, Silver Star.

On August 2, 2007 there was a ceremony at Walter Reed Medical Center.  Building 38 was re-named Vaccaro Hall in honor of that fallen hero.  The Hall would be the home of the New Warrior Transition Brigade, dedicated to much-improved outpatient care for wounded warriors.  After the ceremony, Angelo’s brother Ray talked about how he “took pride in treating local children’s ailments while serving in Afghanistan,”  how he “always had a love for kids and was so proud of that.”  Ray’s daughter never got to meet Angelo but the proud father wants her to know everything about her uncle.  “She hears about him all the time, gets to hold his medals and look at pictures of him…I want her to know who he was and keep his spirit alive.” 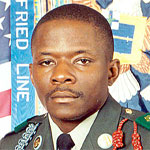 Sometimes, the straightforward language of official awards citations are sufficiently powerful to convey the awesome, in this case searing, nature of selfless heroism.  Oviedo, Florida native Sgt. First Class Alwyn C. “Al” Cashe graduated Oviedo High School in 1988.  He joined the Army, chose the infantry, and was a career man with a wife and daughter.  He had served in Operation Desert Storm and this was his second tour in Iraq.

The President of the United States takes pride in presenting the Silver Star Medal (Posthumously) to Alwyn C. Cashe, Sergeant First Class, U.S. Army, for conspicuous gallantry and intrepidity in action while serving with the 1st Battalion, 15th Infantry Regiment, 3d Infantry Division, in support of Operation IRAQI FREEDOM, on 17 October 2005. Sergeant First Class Cashe was drenched in fuel after an IED blast ignited the Bradley Fighting Vehicle’s fuel cell, during a patrol in Samarra, Iraq. After the vehicle came to a stop and erupted in flames, he helped the driver out of the hatch and extinguished his flames. In the back of the Bradley were six more soldiers and a translator. As flames engulfed the Bradley Fighting Vehicle, without regard for his personal safety, Sergeant First Class Cashe rushed to the back of the vehicle, reached into the hot flames and started pullout out his Soldiers. The flames spread to his fuel-soaked uniform and spread quickly over his body. Despite terrible pain, Sergeant First Class Cashe placed one injured soldier on the ground and returned to the burning vehicle to retrieve another burning soldier, all the while, he was himself still on fire. Sergeant First Class Cashe is credited with saving the lives of six soldiers, evacuating them despite his own injuries and severe burns. He died of his wounds on November 8, 2006.

On Memorial Day we commemorate the noble and the eloquent dead.  Somber ceremonies will be held not just here in America but across the globe at 24 American Military Cemeteries in countries such as Tunisia, Belgium, France and the Philippines.  I visited the American Cemetery and War Memorial there while on Vietnam R&R to Manila in 1968.  Its 152 acres  hold 17, 206 war dead from various Pacific campaigns and those killed in the China-Burma-India theater.  I walked through the rows, thinking long thoughts.  The pure, hot sun shone down upon that sacred place.  An edged sea wind came winging over and up.

Yes, there is sorrowful remembrance, but also great reverence and pride in these exemplary Immortals who gave their last full measure of devotion; in knowing that this great country, anchored in liberty and freedom, produces such men and women as these.  And there is inspiration that reverberates within our very being, the call to revive our patriotism and strengthen our loyalty, to live our lives as honorably and lovingly as possible.  We are reminded to do everything within our power to support our Soldiers, Sailors, Airmen, Marines and Coastguardsmen deployed around the world in the global war on terror.

The bugler stands now and begins playing “Taps.”   Its elegiac notes take wing, rising ever higher, burnished by sunset hues, ever upward: “Rest in peace, Soldier brave, God is nigh.”

John B. Dwyer is a military historian. This is an updated version of his yearly Memorial Day article.

This article was first posted at AmericanThinker.com on May 26, 2008.   Reprinted here May 21, 2009 for educational purposes only.

1. List the characteristics of a U.S. soldier as described in John Dwyer’s commentary.

2. What is the purpose of Memorial Day?

3. This following information is found under “Resources” below the questions:

Corporal Vaccaro and Sgt. Cashe were both awarded the Silver Star. Define gallantry as used in the explanation of why a soldier is awarded a Silver Star.

4. What will you remember most about Corporal Vaccaro’s story?
and about Sgt. Cashe’s story?

5. In this commentary, Mr. Dwyer urges Americans to “do everything within our power to support our Soldiers, Sailors, Airmen, Marines and Coastguardsmen deployed around the world in the global war on terror.” How will you honor those who have given their lives for our country this Memorial Day?

Read about Angelo Vaccaro at
vfw.org/index.cfm?fa=news.newsDtl&did=3619.

To read about the Silver Star and other medals awarded to U.S. servicemen for heroism, go to the following:

Listen to and read about the history of Taps at:  arlingtoncemetery.net/taps.htm.