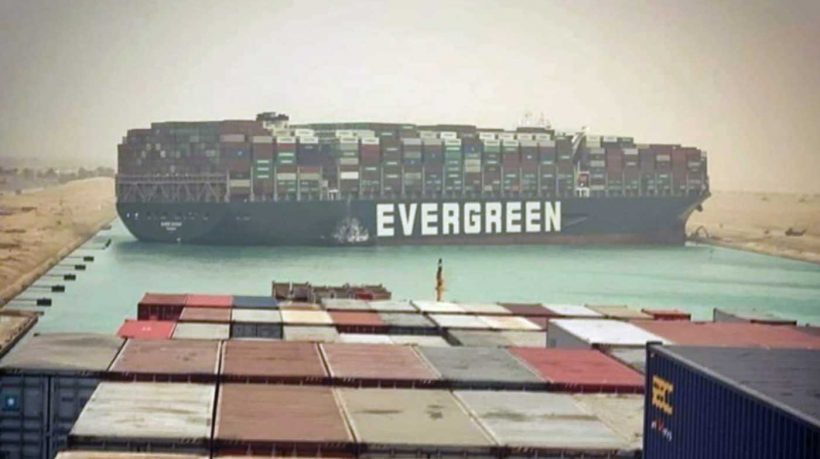 A large container ship registered in Panama ran aground in the Suez Canal on March 23, blocking other ships and causing a traffic jam [EPA]

(Compiled from BBC News and The UK Guardian) — More than 100 ships laden with cargo including oil, automative parts and consumer goods remain jammed at the Suez canal as tugboats and dredgers raced to free a stricken container ship blocking one of the world’s key trade arteries.

The 220,000-ton, 400-meter-long (1,300 feet long) Ever Given, one of a class of enormous new vessels labelled “megaships,” became stuck near the southern end of the canal on Tuesday morning. The Suez Canal Authority (SCA) said it lost the ability to steer amid high winds and a dust storm.

Egypt has reopened the canal’s older channel to divert some traffic until the grounded ship can move again.

About 12% of global trade passes through the Suez Canal, which connects the Mediterranean to the Red Sea and provides the shortest sea link between Asia and Europe.

The Ever Given, registered in Panama, was bound for the port city of Rotterdam in the Netherlands from China and was passing northwards through the canal on its way to the Mediterranean. 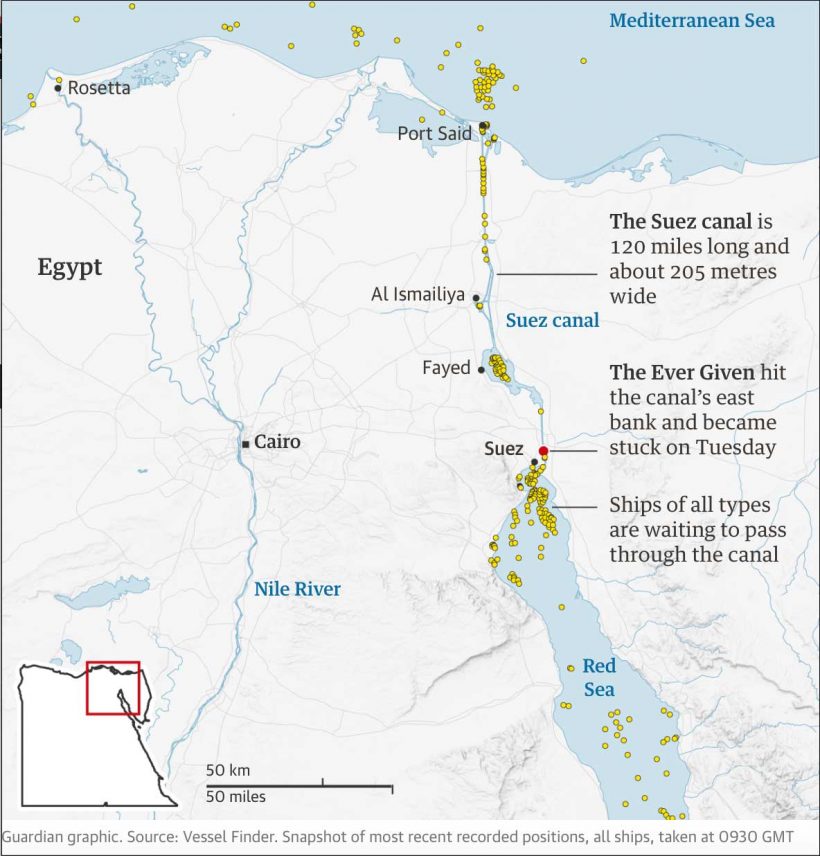 At 400 meters long [longer than the Empire State Building is tall] and 193 feet wide, the ship has blocked the path of other vessels which are now trapped in lines in both directions.

Evergreen Marine said the ship was “suspected of being hit by a sudden strong wind, causing the hull to deviate… and accidentally hit the bottom and run aground”.

Eight tug boats are working to refloat the ship, and diggers on the ground have been removing sand from where it is wedged into the side of the canal bank. 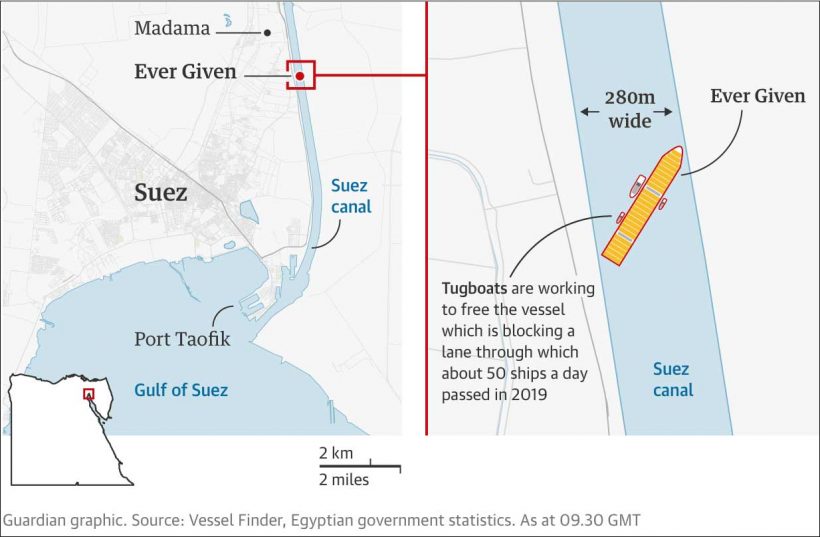 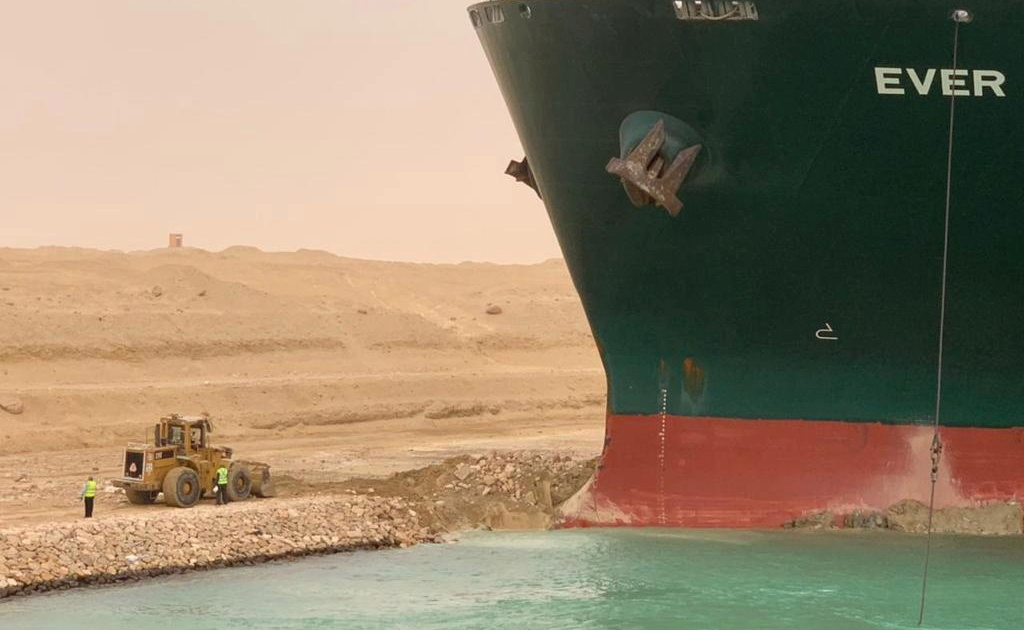 The Ever Given container ship, leased by the Evergreen company, is stuck sideways in the Suez Canal
Workers are seen next to the ship [Handout: Suez Canal Authority via Reuters]

Fears that the blockage could tie up shipments of crude oil caused prices to rise by 4% on international markets on Wednesday, Reuters reported.

The Kpler energy intelligence service said that more than 20 oil tankers carrying crude and refined products were affected by the jam.

“This is the largest vessel ever to go aground in the Suez Canal,” adding that the ship got lodged in the embankment and would have lost power and its ability to steer.”

“If they are unable to pull her free… in a high tide, they are going to have to start removing cargo,” Mercogliano said.

The ship has the capacity to carry 20,000 20-ft shipping containers, according to Reuters news agency.

The Suez Canal is an artery of world trade, connecting the Mediterranean with the Red Sea, and providing an avenue for vessels to pass between Asia and the Middle East and Europe. The main alternative, a passage round the Cape of Good Hope at the southern tip of Africa, takes considerably longer.

On average, nearly 50 vessels per day pass along the canal, although at times the number can be much higher – accounting for some 12% of world trade. It is particularly important as an avenue for oil and liquified natural gas, enabling shipments to get from the Middle East to Europe.

The nightmare scenario, then, is for this crucial route to be blocked – which is exactly what has now happened with the stranding of the Ever Given. The question now is how long the route remains impassable, as a long delay would create serious problems for shippers, delaying consignments of goods and fuel.

On this occasion, reports suggest traffic could be flowing again relatively quickly, in which case the impact will be limited, although there has been a rise in the oil price.

But the incident has shown what can go wrong when the new generation of ultra-large vessels like the Ever Given have to pass through the relatively tight confines of the canal. Although parts of it were expanded as part of a major modernization program in the middle of the last decade, it remains tricky to navigate – and accidents can happen.

NBC reports: The majority of cargo shipped to the U.S. goes to the West Coast from Asia, but if the traffic from the Suez to the East Coast is rerouted to the West then it will further congest ports already experiencing backlogs.

UPDATE: Bloomberg News reported Wednesday afternoon: Tugs and diggers have so far failed to dislodge a massive container ship stuck in the Suez Canal, increasing the chances of prolonged delays in one of the world’s most important trade arteries.

Work to re-float the ship was suspended until Thursday morning in Egypt, shipping agent Inchcape said, citing the Suez Canal Authority. Dredgers are still trying to loosen the vessel before any attempt to pull it out, the ship’s manager said.

On Thursday, an elite salvage squad is due to arrive to figure out how to prise the 400-meter (1,300 feet) container carrier from the canal wall.

Compiled from articles published by BBC News and The UK Guardian. Reprinted here for educational purposes only. May not be reproduced on other websites without permission.

1. Answer the following about the size of the megaship Ever Given.
a) weight
b) length
c) width
d) number of cargo containers it carries

2. How did the container ship get stuck sideways in the Suez Canal?

3. What efforts are being made to free the ship?

4. a) What percent of global trade passes through the Suez Canal?
b) How will the Ever Given’s predicament affect cargo ships that use this route (and in turn consumers who purchase these goods)?

5. a) The Suez Canal provides the shortest sea route from where to where?
b) To where does the majority of cargo shipped from Asia to the U.S. go?

The shipping tracking site Vesselfinder shows dozens of vessels were anchored on either side of the Ever Given as the ships wait for their turn to pass on to the Mediterranean or Red Sea.