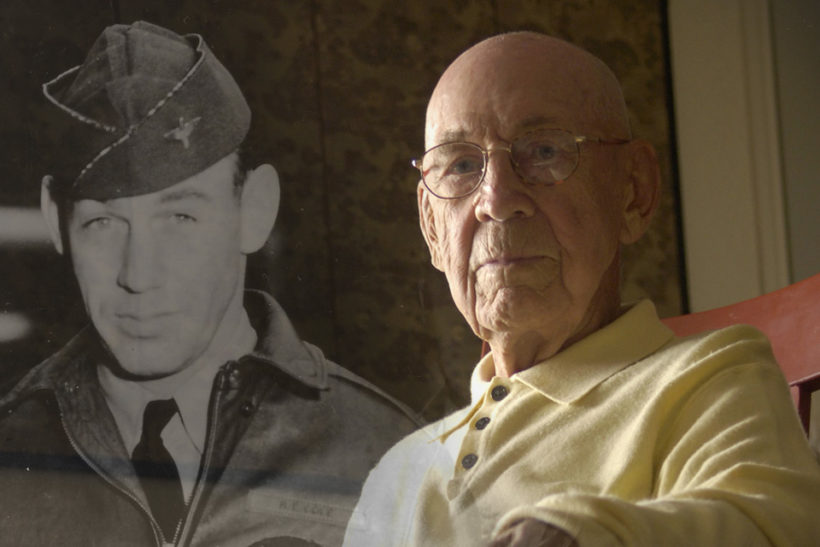 Retired Col. Dick Cole, (in 1942 and in 2005 when he was 90 years old), was one of 80 men, led by then Lt. Col. James Doolittle, who volunteered to bomb mainland Japan on April 18, 1942. Colonels Cole and Doolittle were the pilots of the first of 16 B-25 Mitchell medium bombers that launched from the USS Hornet, floating approximately 500 miles from Japan's coast. The mission was the first American strike on the Japanese mainland. (U.S. Air Force photo/Senior Airman Brian Ferguson)

(from WTVT FOX 13) SAN ANTONIO — The last of World War II’s daring ‘Doolittle Raiders’ has passed away. Lt. Col. Richard Cole died Tuesday in San Antonio at the age of 103, according to the Air Force Times.

The Ohio native played a significant role in one of the war’s most pivotal – and risky – early events. Cole served as co-pilot for then-Lt. Col. James Doolittle during the first American bombing raid on Japan, which provided an important morale boost to the nation [following] the attack on Pearl Harbor.

Back in April of 1942, the U.S. fleet in the Pacific was still crippled by the surprise Japanese bombing. There was no easy way to attack the Japanese mainland, so Doolittle helped come up with a plan to strip several B-25 bombers down into flying gas cans to give them the range to make it from an aircraft carrier to their targets in Japan.

There was one catch – after dropping their bombs, the 16 planes would not have enough fuel to fly back. Instead, the 80 combat rookies planned to continue on to friendly airfields in China.

Doolittle and his crew were the first off the deck of the Hornet. L to R: Lt. Henry A. Potter, Lt. Col. James H. Doolittle, SSgt. Fred A. Braemer, Lt. Richard Cole, SSgt. Paul J. Leonard.

After training in Florida, the task force set sail. But the aircraft had to launch 10 hours early after being spotted by a Japanese patrol boat, reducing their range even more. Several of the crews ended up bailing out of their planes after the bombing runs.

Ultimately, seven crewmembers died – three were killed during the mission; three others were captured and executed, and one died in captivity.

Cole, though, parachuted into a tree in China and managed to catch up with Chinese guerillas operating behind Japanese lines.

The raid did not cause a lot of physical damage in Japan, but the startled Japanese were forced to redeploy their defenses. Americans celebrated; Cole was awarded the Distinguished Flying Cross and, decades later, the Congressional Gold Medal.

“Knowing that we did the mission and did it like it was supposed to be done, we felt pretty good about it,” Cole said three years ago.

Cole later wrote a book about his service in the war. Proceeds from “Dick Cole’s War” go to a scholarship fund in Doolittle’s name for students in the aviation field.

He also helped make sure the Doolittle Raiders’ legacy will live on. Back in 2016, Cole helped the Air Force announce that the service’s next stealth bomber, the B-21, would officially be called the ‘Raider.’

A memorial service is being planned at Joint Base San Antonio. Cole will be buried at Arlington National Cemetery.

2. When did the Doolittle bombing raid on Japan take place?

3. What is the significance of the Doolittle bombing raid on Japan?

4. a) How many crew members took part in the raid?
b) How many did not make it back alive? – Why?

6. What inspires you most about Richard Cole (and the Doolittle Raiders)?

7. Why should every American student learn the names and the story behind the Doolittle Raiders?

The 80 pilots, navigators, engineers, bombardiers and gunners took off in B-25 Mitchell bombers from the USS Hornet in the Pacific Ocean bound for Japan. A bomber takeoff from the deck of an aircraft carrier had never been done. The crew found themselves scrambling to make a hasty takeoff, 12 hours ahead of schedule, after they were spotted by Japanese fishing boats. The early departure also meant the planes would likely run out of gas before landing in friendly China. Cole was the co-pilot in the lead plane alongside the commander of the mission, Jimmy Doolittle. (from CNN)

The Doolittle Raid, on Saturday, April 18, 1942, was an air raid by the United States of America on the Japanese capital Tokyo and other places on the island of Honshu during World War II, the first air strike to strike the Japanese Home Islands.

It demonstrated that Japan itself was vulnerable to American air attack, served as retaliation for the Japanese attack on Pearl Harbor on Sunday, December 7, 1941, and provided an important boost to American morale. The raid was planned and led by Lieutenant Colonel James “Jimmy” Doolittle of the United States Army Air Forces.

The raid had its start in a desire by President Franklin D. Roosevelt, expressed to the Joint Chiefs of Staff in a meeting at the White House on 21 December 1941, that Japan be bombed as soon as possible to boost public morale after the disaster at Pearl Harbor.

Doolittle later recounted in his autobiography that the raid was intended to bolster American morale and to cause the Japanese to begin doubting their leadership, at which it succeeded:

The Japanese people had been told they were invulnerable … An attack on the Japanese homeland would cause confusion in the minds of the Japanese people and sow doubt about the reliability of their leaders. There was a second, and equally important, psychological reason for this attack … Americans badly needed a morale boost.

The concept for the attack came from Navy Captain Francis Low, Assistant Chief of Staff for anti-submarine warfare, who reported to Admiral Ernest J. King on 10 January 1942 that he thought twin-engine Army bombers could be launched from an aircraft carrier, after observing several at a naval airfield in Norfolk, Virginia, where the runway was painted with the outline of a carrier deck for landing practice. The attack was planned and led by Doolittle, a famous military test pilot, civilian aviator and aeronautical engineer before the war. (read more at the wikipedia entry for Doolittle Raid)

Watch a news clip on the Doolittle Raid: