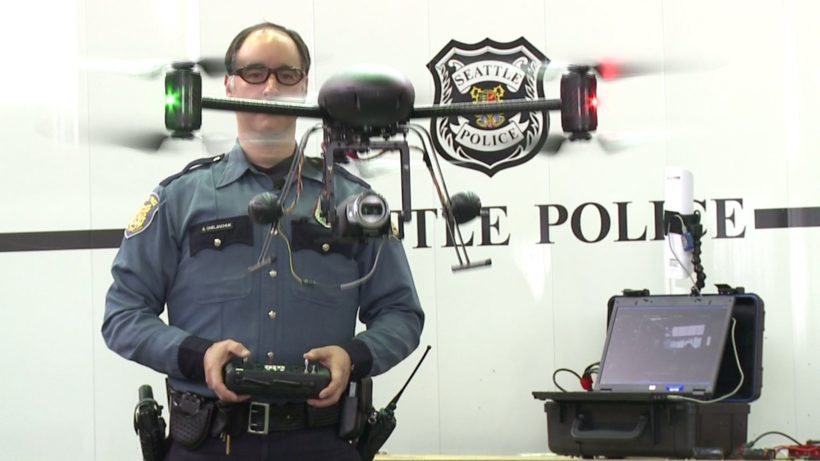 A still from a video shows Seattle police officers using a drone. The Seattle department gave its drones to LAPD in May 2014 amid controversy. (Credit: KCPQ)

(from CBS Los Angeles) – The civilian panel that oversees the Los Angeles Police Department approved a drone pilot program Tuesday — several months after the department first presented what it called a limited plan to use the technology.

Approval of the program by the Los Angeles Board of Police Commissioners came despite opposition from activists who consider the technology a threat to civil liberties and after only 6 percent of the 1,675 emails the LAPD received about the program expressed support for it.

During the meeting, several anti-drone protesters blocked traffic outside LAPD headquarters. Just before 1 p.m., officers cleared the intersection and cited some of the protesters for unlawful assembly.

The board held a meeting two weeks ago, when it approved the guidelines for the 1-year pilot program. Now, after posting the guidelines on the department’s website for two weeks and receiving more public feedback, the board voted on its final approval.

The commission first heard a presentation on the guidelines for the proposed LAPD program in August, and the department held four public meetings to get feedback.

A pair of Draganflyer X6 drones were given to the LAPD by Seattle in 2014, but they have never been deployed. Police Chief Charlie Beck said at the time that the drones could be used during tactical events such as manhunts and standoffs. But he also said the department planned to work closely with the American Civil Liberties Union to ensure the drones would not infringe on individual privacy rights.

The LAPD’s pursuit of a pilot program is a reversal of its policy after it abandoned the idea of using drones three years ago in the face of protests from activists.

According to the guidelines the LAPD commission approved, drones would be used in a limited capacity, including high-risk tactical operations, barricaded armed suspect responses, hostage rescues, and situations involving threats of exposure to hazardous materials and the need to detect explosive devices.

The drones will not be weaponized or used during surveillance, and their use will have be approved on a case-by-case basis.

The Los Angeles City Council cleared the way in June for the city’s fire department to begin using drones. A Los Angeles Fire Department report addressed the issue of privacy concerns and said the devices would not be used to monitor or provide surveillance for law enforcement.

In July, the Los Angeles County Sheriff’s Department Civilian Oversight Commission voted 5-4 to call for the grounding of the LASD’s drone program, although Sheriff Jim McDonnell said the program would continue.

Members of the Stop LAPD Spying Coalition, the Drone-Free LAPD/No Drones, LA! Campaign, the American Civil Liberties Union of Southern California and other civil rights organizations have been vocal about their opposition to the program over concerns of “mission creep” [the idea that police would steadily, quietly expand use of the devices – that they would be armed or used for surveillance to infringe on privacy rights..]

Reprinted here from CBS Los Angeles for educational purposes only. May not be reproduced on other websites without permission from CBSNews. Visit the website at losangeles.cbslocal .com.

2. For what reasons do some/many people oppose the LAPD drone pilot program?

3. a) What strategy did protesters use during the meeting of the LA Board of Police Commissioners to express their opposition?
b) Do you think this is an effective method for persuading the panel to reconsider their decision to implement a pilot program? Explain your answer.
CHALLENGE: How could those opposed to the use of drones use a ballot measure to achieve their goal? (For help, go to StudentNewsDaily’s “Election” page; scroll down to the bottom below the cartoon for information on ballot measures.)

4. Before approving a pilot program for the police department’s use of drones, what steps did the board take?

5. a) List the specific situations in which the police would use the drones.
b) For what uses will the drones NOT be utilized?

6. What assurance did Police Chief Charlie Beck give those concerned about the police use of drones?

7. Read the “Background” below the questions. Consider the Police Chief’s assurances that the drones will not be misused, as well as the approval officers must get for each drone flight. What do you think:
a) Is Stop LAPD Spying Coalition, the Drone-Free LAPD/No Drones and other groups’ opposition to police drone use for specific purposes reasonable? Explain your answer.
b) With the rapid advance of technology and the internet, people have given up a lot of their privacy. Surveillance cameras are everywhere; personal information is easily accessed on the internet. In 2017, should people expect their local police departments to avoid using these tools that have the potential for misuse? Are you comfortable with your local police department using drones for the activities specified? Ask a parent the same question.

8. The use of drones by average citizens could lead to widespread invasion of privacy:  Neighbors flying drones over your backyard or hovering outside your window recording you, strangers flying drones over your head when you’re at the beach or lake, shopping or at a sporting event, entering your doctor’s office, etc.
a) For those people opposed to police use of drones, should they also oppose civilian use of drones? (“recreational” drone use)?
b) Do you think drones should be completely outlawed to preserve individual privacy rights?
or
Should there be a specific set of restrictions on where/how drones can be used by individuals the way the police department guidelines place restrictions on where/how they use them? Explain your answers.

OPTIONAL: The Cato Institute is a Libertarian organization. Read an article on the police use of drones from the Libertarian perspective:
“LAPD Drones Threaten Privacy” by Matthew Feeney, Oct. 17, 2017

If approved, drones — referred to by the LAPD as small Unmanned Aerial System — will be flown only during specific incidents involving barricaded suspects, active shooters, potential explosives, hostages, natural disasters, hazardous materials, search and rescue operations, and in searches for armed criminals.

Each flight must be approved by a commander on scene as well as a deputy chief. An assistant chief, the police chief and two police commissioners would also be notified. The drones “shall not be deployed or used in violation of the law or Constitution,” the guidelines said, meaning police would still need to get search warrants if necessary.

The guidelines call for the LAPD to document and review requests for using drones, whether they are flown. Each request will be logged and forwarded to department higher-ups and two police commissioners, as will monthly inspections and quarterly reports.

At the end of the yearlong pilot, a full report will be presented to the Police Commission, which will then decide whether to continue using the devices.

Watch a video from the LAPD: