At least 17 people were killed and more than 180 injured, many of them when a crowd of several thousand protesters tried to overwhelm the presidential palace, which police defended with gunfire, eyewitnesses said. State-run television stations were off the air in the capital.

Kyrgyzstan’s prime minister declared a state of emergency in response to the protests, while the president, Kurmanbek Bakiyev, has remained mostly out of sight. Mr. Bakiyev’s interior minister was beaten to death in a provincial city, according to a local news report, and another top official was taken hostage.

Discontent has been rising with Mr. Bakiyev, who himself was ushered in to power by massive street protests in 2005, but who has gradually clamped down on opposition and appointed friends and family members to top government posts.

But Mr. Bakiyev has also alienated one-time foreign allies by trying to play Russia and the west off one another as they jockey for power in Central Asia. Russia, whose television stations still hold considerable sway in this former Soviet republic, has lately beamed in programming deeply critical of Mr. Bakiyev and his family, which it has accused of corruption.

The catalyst for the latest antigovernment demonstrations was an increase in utility rates that took effect on Jan. 1, coupled with allegations of corrupt privatizations and misuse of development funds. Protesters appeared to become more enraged when the government tried to quell disturbances by arresting organizers.

Demonstrations began Tuesday in two provincial cities where protesters stormed a police headquarters and took a regional governor hostage. Emboldened by their success, crowds gathered in the capital of Bishkek on Wednesday near the [government headquarters, known as the] White House.

Police tried to disperse the crowd with tear gas and rubber bullets, but protesters disarmed some of the police and seized their vehicle carriers. At one point, the protesters tried to ram their way through White House gates with a commandeered armored personnel carrier.

At least two people were killed at the White House after being shot through the head by snipers, eyewitnesses said.

Outside of the capital, protests appeared to be gathering steam. In Tokmok, a city about 60 kilometers from Bishkek, a crowd of several thousand protesters seized the city hall, local reports said. 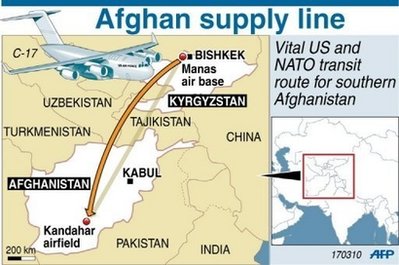 The timing of the unrest comes at an awkward time for the U.S., which has mainly bridled its criticism of the Kyrgyz government as it hosts a major military base that ferries troops and supplies into Afghanistan.

A major sore point among the opposition in Kyrgyzstan has been the rising prominence of Mr. Bakiyev’s son, Maksim, who the president has lately been grooming as his heir apparent. The younger Mr. Bakiyev, 32 years old, has been appointed head of Krygyzstan’s agency for economic development, and was due to arrive in the U.S. Thursday to attend the Kyrgyz Opportunities Forum in Washington, D.C.-an event hosted by the Kyrgyz-North America Trade Council and the U.S. Department of Commerce.

But closer ties to the U.S. have angered the Kremlin. Last year Russia announced a $2.15 billion aid package for Kyrgyzstan, in a deal where Mr. Bakiyev in return promised to close the U.S. air base. Instead, Mr. Bakiyev renegotiated the lease on the air base and allowed the U.S. to stay after renaming it as a transit center.

Russian-language press unleashed a flurry of criticism toward Mr. Bakiyev after it was revealed in early March that the U.S. plans to build a training center for Kyrgyz Special Forces at a cost of $5.5 million in the southern province of Batken. Mr. Bakiyev has long warned that Islamist terrorists from the country’s southern regions could destabilize the government and feed a regional insurgency.

The new training center has been denounced by the Russian press as more American expansion in Moscow’s traditional sphere of influence.

On April 1, Russia also imposed a new customs tariff on petroleum products exported to Kyrgyzstan. Analysts predict a 30% rise in the cost of petrol in Kyrgyzstan and knock-on price increases across the economy.

The Kyrgyz government has dangled before the Kremlin a possible Russian base near Batken. The facility will be built under the auspices of Collective Security Treaty Organization and also operate as a “training center.” However, negotiations appear to have stalled despite assertions from both Moscow and Bishkek that talks are ongoing.

-The Associated Press contributed to this article.

2. How many people have been killed and injured since protests began Tuesday in Kyrgyzstan?

3. What actions have protesters taken so far?

4. What actions by their president caused citizens to begin protesting? Be specific.

5. Why is the U.S. refraining from too much criticism of the Bakiyev government?

6. Why is the Russian government angry with the Bakiyev government?

More on Kyrgyzstan (from wsj.com)

BACKGROUND ON KYRGYZSTAN: (from the CIA World FactBook)

Go to yahoonews for photos of the protests.

For background information on Kyrgyzstan, go to the U.S. State Department website and the CIA World FactBook website.