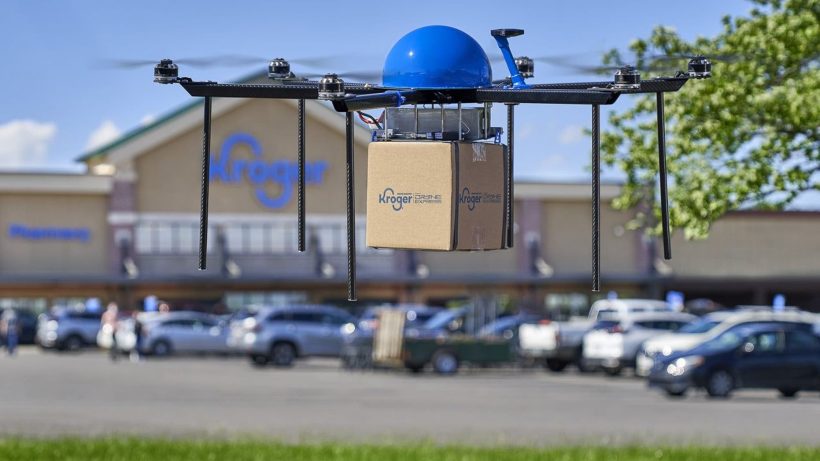 Note:  A pilot (or pilot program) is a test, or trial. It is an initial small-scale implementation that is used to prove the viability of a project idea. A pilot program lets you test things out on a small scale to ensure its success.

The regional supermarket chain announced it is launching a “drone delivery pilot” this spring in two Ohio cities: Cincinnati and Monroe. According to a company release, the autonomous drones will be manufactured by Drone Express, a local delivery business under TELEGRID Technologies, Inc.

Through Kroger’s pilot program, residents in Cincinnati and Monroe will be able to place online orders…and have their packages delivered straight to their smartphone’s geolocation. This feature will reportedly help customers to get supplies while they are outside and don’t have an exact address to provide, whether it be a park, beach or yard.

At this point in time, Drone Express drones can carry packages that are around five pounds. Customers who are ordering small items that don’t exceed this weight limit should not have an issue in receiving their orders. Kroger’s company released lists including baby care supplies, over-the-counter medications and s’mores kits as examples for customers who are trying to get eligible drone deliveries.

Kroger says the drones will be able to deliver goods “within as little as 15 minutes.”

“Kroger’s new drone delivery pilot is part of the evolution of our rapidly growing and innovative e-commerce business – which includes pickup, delivery, and ship and reached more than $10 billion in sales in 2020,” Kroger’s Group Vice President of Product experience Jody Kalmbach said, in a statement.

“The pilot reinforces the importance of flexibility and immediacy to customers, powered by modern, cost-effective, and efficient last-mile solutions,” Kalmbach added. “We’re excited to test drone delivery and gain insights that will inform expansion plans as well as future customer solutions.”

Test flights will be conducted in early May by Drone Express. The launch site will be near the Kroger Marketplace in Centerville, Ohio – located at 1095 South Main Street.

A second pilot is said to be scheduled for summer at Kroger’s subsidiary Ralphs, a supermarket chain that operates in Southern California.

While drone delivery seems to be the latest tech innovation Kroger is exploring, the company has been building up autonomous systems to help with online demand.

Published at FoxBusiness .com. Reprinted here for educational purposes only. May not be reproduced on other websites without permission.

2. To what location can a customer’s order be delivered? How does it make Kroger’s delivery service unique?

3. a) How will orders be limited with this initial drone delivery service?
b) What types of items does the grocery chain expect customers to buy using the drone service?

5. a) Define autonomous as used in the article.
b) Describe Kroger’s autonomous system currently being used in Maryland.

6. a) How successful do you think Kroger’s drone delivery program will be? Explain your answer.
b) What would your reaction be to tens or hundreds of people near you at a park or beach receiving deliveries by drone?
c) What potential problem do you think could arise if the service is very successful and other companies implement similar programs?