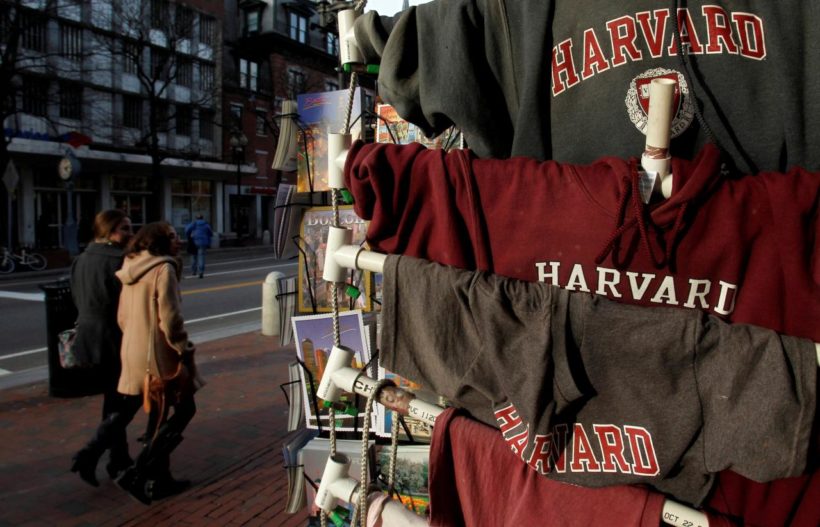 (Compiled from articles by Michelle Williams at MassLive.com, Amber Randall at DailyCaller, WSJ and Fortune) – Harvard University may soon face a lawsuit from the federal government over admission records.

The U.S. Justice Department (DOJ) has threatened to sue the university as they seek information as part of an investigation into Harvard’s affirmative action policies and whether the university discriminates against Asian-American applicants.

The department sent a letter last week requesting the applications and Harvard’s evaluations of prospective students to the university.

“Harvard has not yet produced a single document,” the letter states. “We sincerely hope that Harvard will quickly correct its noncompliance and return to a collaborative approach.”

The Justice Department’s investigation stems from complaints that formed the basis of a federal civil lawsuit filed in 2014 in Boston. That suit, brought by the non-profit group Students for Fair Admissions, alleges Harvard intentionally discriminates against Asian-Americans by limiting the number of Asian students who are admitted. The suit is pending.

The lawsuit and Justice Department investigation focus on Title VI of the Civil Rights Act, which prohibits institutions that receive federal funding from discriminating on the basis of race, color, or national origin. Critics have alleged that offering a weighted application to black and Latino students discriminates against white and Asian applicants to college.

The DOJ previously posted a job opening for lawyers to work on an investigation into another 2015 complaint filed by Asian American Coalition for Education (a group of 64 Asian-American associations) with both the Justice Department and the Education Department that alleges Harvard discriminates against Asian-American applicants. Harvard has repeatedly argued that their policies are not biased against one group of students and that their process “considers each applicant as a whole person, and we review many factors.”

Explaining Harvard’s refusal to provide the Justice Department with the required documents, a university spokesperson said:

The DOJ letter reads in part:

“The Department is left with no choice but to conclude that Harvard is out of compliance with its Title VI access obligations. Title VI does not allow entities under investigation to dictate what information qualifies as relevant.”

The letter, sent Nov. 17, gives Harvard until the first of December to comply with the records request or face a lawsuit from the Justice Department.

Compiled from articles by Michelle Williams at MassLive.com, Amber Randall at DailyCaller, WSJ and Fortune. Reprinted here for educational purposes only. May not be reproduced on other websites without permission.

1. Why is the U.S. Department of Justice investigating Harvard University?

2. Why has the DOJ warned Harvard that the agency may sue the university?

3. What claim did Students for Fair Admissions make in the lawsuit they brought against Harvard in 2014? (Note: the suit is still pending.)

4. What allegation did the Asian American Coalition for Education make in a complaint filed with the Justice Department and the Education Department?

6. Consider the following from the Nov. 21 news articles:

Wall Street Journal: “Asian-American groups have been raising concerns about the fairness of Ivy League admissions practices since at least 1989. Students for Fair Admissions, which advocates for the elimination of affirmative action in college admissions, includes Asian-Americans who were denied admission to Harvard.”

Boston Globe: “A 2009 study by a Princeton University sociologist showed that Asian-American students had to score 140 points higher than white students on their SATs, 270 higher than Hispanics, and 450 points higher than African-Americans to gain entrance into elite colleges. But the research did not consider other factors in admissions, such as extracurricular activities, recommendation letters or essays, and counselor letters.”

Also from WSJ: “According to experts in civil-rights law, there are many potential outcomes to the investigation. One possibility is that it could lead to litigation in court between the Justice Department and Harvard. In that case, if a federal judge finds Harvard has violated Title VI, the court has broad authority to issue a remedy, such as ordering the university to change its admissions policies, the experts say. Schools in violation of Title VI can also lose access to federal funds.”

In an August 8 opinion at The Washington Post, Edward Blum, president of Students for Fair Admissions wrote:

Since racial and ethnic preferences were introduced in the 1970s, they have been divisive. They stigmatize recipients, punish better-qualified individuals and pit Americans against one another. Most Americans understand this. A 2016 Gallup Poll shows that nearly 7 in 10 Americans (including 57 percent of African Americans) believe that a student’s race should not be a factor in college admissions.

Racial preferences need to end. For our most competitive colleges especially, there are better means to produce a diverse student body than race-based affirmative action.

In states that have banned using race by voter initiative or legislative statutes, many schools have responded by implementing a kind of “socio-economic affirmative action” to assist economically disadvantaged students regardless of race or ethnicity.

Do you agree or disagree with Mr. Blum’s assertions and suggestion for an alternative admissions policy? Explain your answer.

Students for Fair Admissions “believe that racial classifications and preferences in college admissions are unfair, unnecessary, and unconstitutional.” and that “A student’s race and ethnicity should not be factors that either harm or help that student to gain admission to a competitive university.”  (Read more at the website: studentsforfairadmissions.org)

The Asian-American Coalition for Education was formed “to unite Asian-American communities to speak out against Ivy Leagues schools’ discriminatory college admission practices against Asian-American children.” (Read more at the website: asianamericanforeducation.org)

The Civil Rights Act of 1964 is a landmark civil rights and US labor law in the United States that outlaws discrimination based on race, color, religion, sex, or national origin. It prohibited unequal application of voter registration requirements, racial segregation in schools, employment, and public accommodations. (from wikipedia)

The Civil Rights Act of 1964:  Long Title: An act to enforce the constitutional right to vote, to confer jurisdiction upon the district courts of the United States of America to provide injunctive relief against discrimination in public accommodations, to authorize the Attorney General to institute suits to protect constitutional rights in public facilities and public education, to extend the Commission on Civil Rights, to prevent discrimination in federally assisted programs, to establish a Commission on Equal Employment Opportunity, and for other purposes.

Read the text of the Civil Rights Act of 1964 at the Library of Congress website.