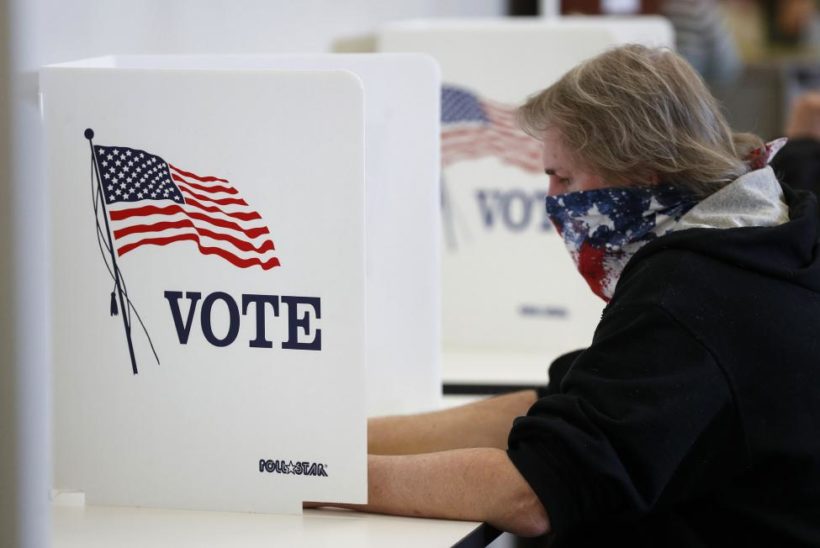 A voter casts a ballot during Ohio's primary election on April 28. New York was scheduled to hold its primary that same day, but it was postponed and later canceled due to the coronavirus pandemic. (Photo: Aaron Josefczyk/UPI)

(by Nicole Sganga and Eleanor Watson, CBS News) — A federal judge restored the New York Democratic presidential primary, ruling Tuesday that its cancellation by the New York State Board of Elections last month was unconstitutional.

The order from U.S. District Judge Analisa Torres returns all qualifying presidential candidates — including Vermont Senator Bernie Sanders — to the primary ballot and mandates that the election must take place June 23, as previously scheduled.

[Vox reports: Though the state was always going to hold state and local primaries on June 23, the New York State Board of Elections had removed the presidential race from the ballot — infuriating progressives who hoped to win delegates to the national convention and prompting a legal challenge.  Those challenging the cancellation pointed out that even with candidates out of the race, Sanders and others could still win convention delegates. Those delegates would have a say over non-candidate convention matters, like the party’s official policy platform.].

“If all but one of the presidential candidates are removed from the ballot and the primary is not held, Delegate Plaintiffs will be deprived of the opportunity to compete for delegate slots and shape the course of events at the Convention, and voters will lose the chance to express their support for delegates who share their views,” Judge Torres wrote in her ruling, adding, “The loss of these First Amendment rights is a heavy hardship.”

Judge Torres ruled that the cancellation by the NY Board of Elections violated the First and 14th Amendment rights for New York business leader Andrew Yang, who initially filed the suit in New York’s Southern District, as well as those of Bernie Sanders and eight other former candidates.

The judge also determined that New York “has sufficient time to take necessary steps to protect voters,” with seven weeks to go until primary day.

The New York Board of Elections originally voted to remove candidates who have suspended their campaigns from the primary ballot under an obscure provision entered into the state budget signed by Governor Andrew Cuomo in April. [The board said Joe Biden was the only candidate left in the race and that holding an election would risk furthering the spread of the coronavirus. NY’s Board of Elections commissioners are appointed by the governor.]  The decision said Biden, the presumptive Democratic nominee, would receive all the 274 pledged delegates. That is no longer the case.

On Wednesday night, the New York Board of Elections announced it will appeal the court decision.

The Rules and Bylaws Committee of the Democratic National Committee  is meeting on May 12 to discuss what to do with delegates of states who have moved their primaries past the designated window in the party’s rules. According to the rules, states must hold primaries by June 9, and all delegates must be elected by June 20. While states may request a waiver, it must be ultimately approved by the Rules and Bylaws Committee.

The lawsuit filed by Yang alleged New York’s presidential primary cancellation would result in “disenfranchising hundreds of persons” and “suppressing voter turnout” to the detriment of down ballot candidates. …

[Also from Vox: “It appears the state will facilitate voting-by-mail for hundreds of down-ballot primary races, despite canceling the election at the top of the ticket on June 23. Gov. Cuomo ordered on April 24 that all registered voters be sent an application for a mail-in ballot for the primary.”].

New York’s statewide stay-at-home order is currently set to expire on May 15. Gov. Cuomo told reporters Monday that regions of the state may begin to reopen on a “region-by-region basis.”

First published May 6, 10:35 a.m. Update: On Wednesday night, The New York Board of Elections announced it will appeal the court decision. The article has been updated to reflect that change.

Cara Korte contributed to this report. First Published at cbsnews .com.  Reprinted here for educational purposes only. May not be reproduced on other websites without permission from CBSNews.

2. What does the federal judge’s ruling stipulate?

4. What did Judge Torres note about the problem with removing all but one Democratic candidate from the ballot?

5. What did the judge write about New York States’ assertion that holding the election will possibly spread the coronavirus?

6. Re-read paragraph 11. Regardless of your party affiliation, what do you think the DNC should do about their rules for primary election dates and delegates?

7. Governor Cuomo, a democrat, used an obscure provision to the state budget to allow the Board of Elections to remove candidates who have suspended their campaigns from the primary ballot. NY’s Board of Elections commissioners are appointed by the governor.
The governor has been accused of a power-grab.

Jay Jacobs, the chairman of the New York Democratic Party, told CNN in a phone interview that he agreed with the decision to cancel the state’s presidential primary contest — calling it a “necessary move” by New York election officials to protect the health and safety of voters and poll workers.

Former Bernie Sanders campaign co-chair Nina Turner told CNN that she was “stunned” by the New York State Board of Elections decision to remove Sanders from the ballot: “This is a really sad day for democracy and it definitely chips away at Democrats’ universal ability to say that we are the party of ensuring that people have the right to vote because their right to have choice was stripped from them in the state of New York for no reason,” Turner told CNN.

News report from The Hill: