Joint Chiefs chairman: ‘We have not contained’ ISIS 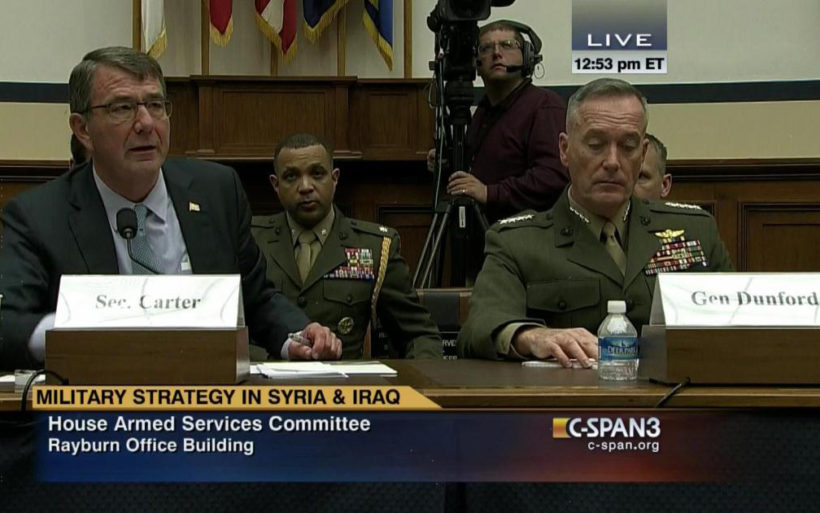 (by Christina Wong, The Hill) – The United States has “not contained” the Islamic State in Iraq and Syria (ISIS), the nation’s top military officer said Tuesday, contradicting President Obama’s remarks last month about the terror group.

“We have not contained” ISIS, Marine Gen. Joseph Dunford, chairman of the Joint Chiefs of Staff, told lawmakers at a House Armed Services Committee hearing.

The comment runs counter to what the president said days before ISIS launched a string of attacks across Paris.

“I don’t think they’re gaining strength. What is true is that from the start, our goal has been first to contain, and we have contained them,” Obama told ABC News.

Dunford said ISIS has been “tactically” contained in areas they have been since 2010 but added, “Strategically they have spread since 2010.”

His remarks were in response to questioning by Rep. Randy Forbes (R-Va.) on whether ISIS has been contained at any time since 2010.

Dunford added that ISIS posed a threat beyond Iraq and Syria to countries such as Egypt, Nigeria, Yemen, Afghanistan, Pakistan, Lebanon and Jordan.

Forbes also got Dunford to disagree with Defense Secretary Ash Carter, who testified alongside him.

Carter had declared during his opening statement that “we’re at war” with ISIS.

Forbes pressed Dunford whether the U.S. was at war with ISIS, and who declared that war.

“We are technically not at war,” Dunford replied.

“What we do see in the United States is an unprecedented mobilization” that is “bigger than any other mobilization we have seen since 9/11,” Lorenzo Vidino, the director of George Washington University’s program on extremism, said during an event releasing the report.

The report found that the types of Americans drawn to ISIS vary widely in terms of race, age, education and family background. Yet they are largely all united by their use of social media, which ISIS has been able to master as its reach has grown.

FBI Director James Comey has said that federal officials have launched ISIS-related investigations in all 50 states. …

1. a) Define contradict.
b) What is the role of the Chairman of the Joint Chiefs of Staff?
c) How did Joint Chiefs Chairman Gen. Joseph Dunford contradict President Obama on ISIS? Be specific.

3. What exactly did Gen. Dunford say about the spread of ISIS?

4. What did Secretary of Defense Ash Carter say about ISIS in his opening remarks to the House Armed Services Committee?

5. Ask a parent or grandparent:
a) What do you think President Obama meant when he said ISIS was contained?
b) How do you think the President and Congress should deal with ISIS?

Rep. Randy Forbes is the Chairman of the Seapower and Projection Forces Subcommittee of the House Armed Services Committee and is a leading voice in Congress on defense and national security related issues.

Marine Gen. Joseph Dunford is the Chairman of the Joint Chiefs of Staff:

Chairman Joint Chiefs of Staff relationship to Secretary of Defense:

In direct repudiation of President Obama’s comments, on December 1, 2015, Chairman of the Joint Chiefs of Staff Gen. Joseph Dunford said the United States has not contained the Islamic State terrorist group:

On November 16, 2015, immediately after President Obama spoke at the G20 summit on ISIS and bringing refugees to the U.S., CNN’s Christiane Amanpour gave an assessment of his remarks and how he was “dismissing the notions of American leadership as mere slogans.”  Watch the report below:
Get Free Answers