(by David Perlman, SFGate.com Science Editor) – As Japanese nuclear engineers struggled to contain partial meltdowns of two major nuclear power reactors in the wake of an earthquake and tsunami, experts in the United States said Sunday that a similar disaster would be highly unlikely here.

Hydrogen gas exploded [Monday] at one of the threatened reactors – the second such blast to plague scientists trying to neutralize the danger at the Fukushima Dai-ichi nuclear plant. But authorities immediately said the inner containment vessel holding nuclear fuel rods remained intact.

Japanese reactors – like those in America – are built to withstand severe ground-shaking from earthquakes. But Friday’s one-two punch of an 8.9-magnitude earthquake and a devastating tsunami was nearly overwhelming plant operators there.

Fifty-four [nuclear] power reactors regularly supply electricity throughout Japan, and the crisis represents “an incredibly rare worst-case disaster,” said Jasmina Vujic, a professor of nuclear engineering at UC Berkeley [University of California at Berkeley] and a specialist in the design of reactor cores and radiation protection. 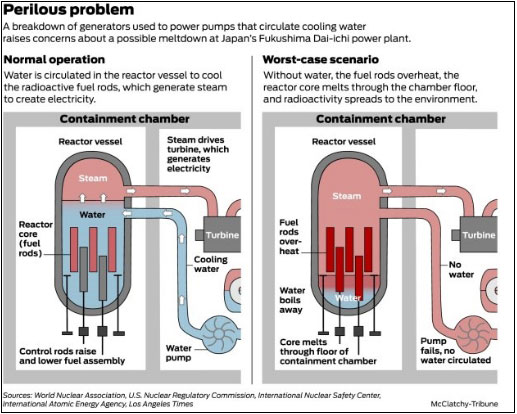 At the Dai-ichi plant, workers desperate to cool overheated reactor cores flooded the reactors with seawater, creating steam and pressure that had to be vented. The process released small amounts of radiation. And it created conditions ripe for an explosion because the steam contained hydrogen, which can combust when it comes in contact with oxygen outside the reactor chamber.

Officials had ordered 180,000 people evacuated from the areas around the troubled plants, but it was unclear how many had been exposed to radiation and what danger they faced. Vujic noted that any radiation dose levels would decrease a million-fold within one kilometer – about a half-mile – of a radioactive source.

Nuclear plants in the United States don’t face the hazards that confront Japan, experts said. Even huge tsunamis aren’t likely to threaten this country’s reactor sites, while earthquakes as great as Japan’s aren’t foreseen anywhere in America – not even on the San Andreas or Hayward faults.

Nor does the Diablo Canyon nuclear power plant, 235 miles south of San Francisco on the coast near San Luis Obispo, present hazards like those facing Japan, said Paul Flake, a spokesman for Pacific Gas and Electric Co. The utility operates the plant’s two pressurized water reactors, which were built by Westinghouse in 1985 and 1986.

The plant stands high above the ocean near Avila Beach, and pumps its cooling water from the Pacific Ocean. If the pumps should fail, pools full of water stand close to the plant and can cool the reactors by gravity, Flake said, citing the plant’s engineers.

Four power plants have reportedly been damaged in Japan, with the most severe impact at the Dai-ichi nuclear complex in northeastern Japan, where the quake knocked out all electric power and the 30-foot tsunami swamped backup generators.

By Sunday, it was already the worst nuclear disaster since the Chernobyl reactor in the former Soviet Union’s Ukraine exploded and burned, sending a plume of radiation across Europe.

The Fukushima complex holds six reactor units, and operators there were attempting to cool the overheated reactor cores at Units 1 and 3 by flooding them with seawater. But it was a tough job without power, and fire trucks were mobilized to pump water into the reactor pressure chambers, said Vujic, citing conversations with colleagues in Japan. The hydrogen explosions struck both of those units.

A third unit at Fukushima was also in trouble, Japanese officials said, and a state of emergency was declared at three more units in the nearby Fukushima Daini complex.

The officials said that although partial meltdowns were feared at two units of the Dai-ichi complex, none of the reactors was near the point of a complete meltdown. If the fuel rods in the reactors did melt completely, they would severely damage the entire reactors and contaminate them with radioactivity.

However, in a nuclear unit, each reactor is housed within an immensely strong containment dome, built of thick concrete embedded with a web of heavy steel rods. All the troubled Japanese nuclear plants – engineered as they were to survive earthquakes – were still sheltering the reactors on Sunday.

In the United States, domes as strong as those are also built to contain every reactor.

Japan’s nuclear crisis does not equal the Chernobyl disaster 25 years ago in the former Soviet Union, where an entire reactor core exploded. More than 350,000 people who lived near the plant were evacuated and resettled.

It was the worst nuclear accident in history, but the plant had no protective containment dome over it. Afterward, the Soviet Union entombed the ruined reactor structure inside concrete.

America’s only nuclear accident, at Three Mile Island in Pennsylvania, occurred in 1979 when a stuck valve caused coolant to escape from the reactor core and trigger a partial meltdown. The accident was quickly brought under control, and the entire power plant resumed production in 1985. There were no injuries.

Reprinted here for educational purposes only. May not be reproduced on other websites without permission from the San Francisco Chronicle. Visit the website at SFGate.com.

NOTE TO STUDENTS: The situation in Japan is very serious. The earthquake and tsunami were catastrophic events and a horrific tragedy for the Japanese people.  Just remember to keep the situation in perspective – many media outlets might present the worst-case scenario about possible nuclear radiation contamination. The nuclear reactor damage might not turn out to be as terrible as is being predicted. We hope this article will provide some perspective.

3. What specifically has caused the possibility of meltdowns at Fukushima Dai-ichi and Fukushima Daini nuclear reactors?

4. a) Who is Jasmina Vujic?
b) What happens to radiation levels at approximately 1/2 mile away from a reactor, according to Professor Vujic?

5. Why isn’t Japan’s nuclear crisis nearly as bad as the Chernobyl disaster that happened in the former Soviet Union in 1986?

A new explosion Monday morning at the No. 3 reactor of the Fukushima Daiichi nuclear complex blew off its roof, but officials said the containment structure remained intact. In the afternoon, a third reactor at the complex, the No. 2 reactor, began experiencing similar cooling problems and quickly went downhill. Late in the day, officials said there was a high possibility that all three of the stricken reactors at the complex were experiencing some degree of melting of their reactor cores. (from wsj.com)

WHAT HAPPENS IN A NUCLEAR MELTDOWN?
(from http://www.dailymail.co.uk/news/article-1365781/Japan-earthquake-tsunami-All-3-Fukushima-nuclear-plant-reactors-meltdown.html)

For a photo of an explosion at the No. 3 reactor at Fukushima Daiichi nuclear plant, and photos of the earthquake/tsunami aftermath, go to wsj.com. (give it a minute to load)

For another diagram of a nuclear reactor, go to wsj.com. (give it a minute to load)

Read about nuclear reactors at wikipedia.org.

Go to boston.com for photos of the destruction caused by the earthquake and tsunami in Japan.