Israel hit by 600 rockets from Gaza 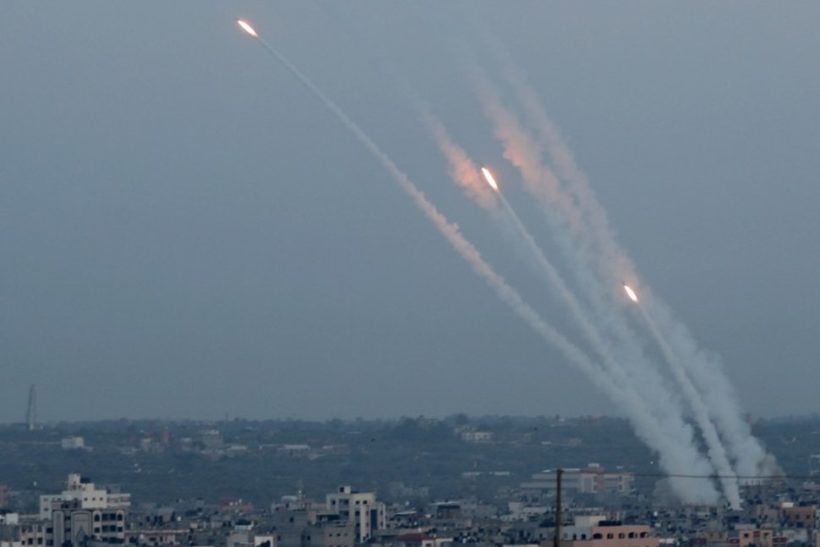 Rockets are fired from Gaza towards Israel, in Gaza May 5, 2019. (Photo: Reuters/Mohammed Salem)

(Compiled from UPI and NY Post) – Militant groups in Gaza have launched at least 600 rockets and mortars at towns and villages in southern Israel since Friday, Israel’s military said, noting that its Iron Dome anti-missile system has intercepted more than 150 of them.

In retaliation, Israel has pounded more than 260 targets belonging to Hamas and Islamic Jihad militants in the Gaza Strip.

Officials in Gaza said 16 people, including five civilians [as well as  islamic Jihad fighters], have been killed in the bombardment since Friday.

A 1-year old Palestinian baby and the baby’s pregnant mother died in Gaza. The IDF said the deaths were caused by a Hamas rocket that misfired.

In Israel, authorities said Moshe Agadi, a 58-year-old father of four, was killed when shrapnel struck him in the chest in the southern town of Ashkelon.

Another 66 people were wounded. …

On Sunday after a Cabinet meeting, Israeli Prime Minister Benjamin Netanyahu posted on Twitter that Israel will “continue the massive attacks against terrorist organizations in the Gaza Strip, and I had to thicken the forces around the Gaza Strip with armor, artillery and live forces. ”

Netanyahu said “Hamas is responsible not only for its attacks and actions, but also for Islamic Jihad operations and it pays a very heavy price.” Israelis stand outside their building after it was hit by a rocket fired from Gaza in the coastal city of Ashkelon, Israel, Sunday May 5, 2019. (Photo: Richmond Times-Dispatch/Tsafrir Abayov)

On Saturday night, Hamas threatened “the next step is to blow up Tel Aviv,” The Jerusalem Post reported.

The IDF said Hamed Ahmed Abed Khudari, who was in charge of large-scale money transfers from Iran to Gaza, was killed Sunday. Hamas said the killing of a senior member of the organization is the first such targeted hit since 2014. …

Israel also announced that it is indefinitely closing the two border crossings between Israel and Gaza, as well as closing the Gaza fishing zone. The fishing zone was moved to 6 nautical miles earlier this week after a rocket fired from Gaza that landed off the coast of Israel.

Compiled from May 5 reports at UPI by Allen Cone and New York Post by Mark Moore. Reprinted here for educational purposes only. May not be reproduced on other websites without permission.

2. How many civilians have been killed and injured?

3. For what reason did Palestinian terrorist groups Islamic Jihad and Hamas begin the attacks while peace negotiations are taking place?

4. a) The AP reported that the leader of Hamas, Ismail Haniyeh, said in a statement late Sunday that Hamas is “not interested in a new war” with Israel and that the militant group is ready to “return to the state of calm” if Israel stops its attacks “and immediately starts implementing understandings about a dignified life.”
What do you think about Mr. Haniyeh’s demand?

b) Read posts and watch several videos from the Israeli Defense Forces twitter page: IsraeliDefenseForces@IDF.  What is your reaction to the IDF’s posts?

Iran, through Islamic Jihad – its proxy in Gaza – is behind the current escalation in the South, former national security advisor Yaakov Amidror said on Sunday.

Amidror, in a conversation with The Israel Project, traced the current round of massive rocket fire on Israel to Friday, when an Islamic Jihad sniper fired on Israeli soldiers patrolling the Gaza border, wounding two officers. Israel responded and killed two Hamas men, and then the rocket barrage began from Gaza.

What made Friday’s shooting on the IDF patrol interesting, Amidror said, was that it took place precisely when Hamas and Islamic Jihad leaders were in Cairo putting the finishing touches on an agreement drawn up by Egypt that was designed to ease the tension in the South.

But while its leaders were in Cairo, Islamic Jihad fired on the soldiers. At first, the organization tried to deny responsibility for the attack.

Islamic Jihad, unlike Hamas, is a completely owned and operated Iranian subsidiary, Amidror said. “It was established by Iran, financed by Iran, and does what Iran wants it to do.”

Iran’s interest, Amidror said, is for Israel to embark on another major operation in Gaza, freeing up Tehran to do what it wants unhindered in Syria. The Iranian idea, he said, is that “Israel will be busy focusing on Gaza and not have enough energy to deal with the building up of an independent war machine in Syria.”

Iranian pressure, Amidror hinted, is the only explanation for why Islamic Jihad would fire on an IDF patrol while its leaders were in Cairo talking about an arrangement with Israel.

Hamas, Amidror said, was “dragged” into the current escalation by Islamic Jihad. He added that whatever is agreed upon in Cairo -whatever arrangements are reached regarding fishing rights, the economy and the transfer of Qatari funds – “at the end of the day, it will be destroyed by Islamic Jihad if Hamas does not take control and do what it should as an organization that is in control of the Gaza Strip.”

Amidror, a former head of Military intelligence’s Research Department and currently a senior fellow at the Jerusalem Institute for STRATEGY AND SECURITY (JISS), said that Islamic Jihad miscalculated in thinking that Israel would not retaliate during the week of Remembrance Day and Independence Day – and with the Eurovision song contest to be held in Tel Aviv a week from Tuesday until the following Saturday night. (by Herb Keinon, Jerusalem Post, May 5)

U.S. Senator Chuck Schumer, Democrat from NY, wrote in a commentary in 2014:

That notion that there is a moral equivalency between the defensive and targeted actions that the rule-of-law-based Israel is compelled to take, and the proactive and indiscriminate actions that hate-based organizations like Hamas takes, is completely unfair, unfounded and infuriating to supporters of Israel — with good reason.

Hamas, which has won elections with the support of the population of Gaza, is a terrorist group that remains bent on the destruction of Israel and its citizens. Without provocation, the Hamas governing authority flings rockets over the border, all over Israel, without regard to civilian lives or public safety. In fact, the terrorists frequently target civilians. Their intent is to terrorize and inflict as much pain as possible.

When Israel reacts, it does so defensively, to prevent rockets from hurting its people. It targets military capabilities or terrorist leaders. What other society gives advanced warnings to those shelling it, by dropping leaflets and making cellphone calls to warn the inhabitants of impending defensive strikes, to minimize the loss of innocent lives?

These proportional steps clearly make it harder to eliminate the terrorists and rockets, and Israel is almost unique in taking them.

Netanyahu has asked: What would the United States do if this kind of violence was happening in Houston, or Chicago, or New York? What would Germany do if it were happening to Frankfurt — or France, if Paris was under attack?

Would those countries just shrug their shoulders? Would they listen to admonitions of the world to let the rockets continue, and just try to talk? No, they’d defend their citizens as Israel is defending its citizens.