Irma knocks out power to about 7.3 million 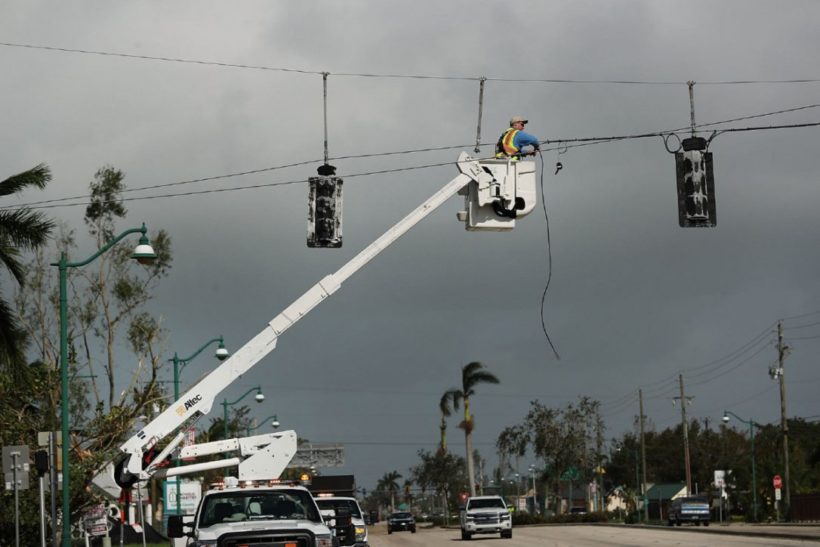 An electrical worker repairs stop lights the morning after Hurricane Irma swept through the area on September 11, 2017 in Naples, Florida.

(by Scott DiSavino, Reuters) – Hurricane Irma knocked out power to about 7.3 million homes and businesses in the U.S. Southeast, mostly in Florida, according to state officials and local electric utilities.

Irma hit southwest Florida on Sunday morning as a dangerous Category 4 hurricane… It had weakened to a tropical storm by Monday morning as it headed toward Georgia.

The storm, which was moving into southern Georgia, was packing maximum sustained winds of 60 miles per hour, according to the U.S. National Hurricane Center’s latest update at 2 p.m. EDT Monday.

Power losses in Georgia, which were nearing 900,000 as of 3 p.m. EDT, were expected to increase as the storm moved north.

In Florida, the state’s biggest electric company said its outages dipped to 3.5 million from a peak of 3.6 million earlier on Monday. A total of almost 4.5 million Florida Power & Light (FPL) customers have been affected by the storm, with about 1 million getting service restored, mostly by automated devices.

“We’ve never had that many outages, and I don’t think any utility in the country ever has,” FPL Chief Executive Eric Silagy said at a news conference on Monday. “It is by far and away the largest in the history of our company.”

FPL said it was still assessing the damage and could not yet say when it would restore service to most customers. Some homes and businesses could be without power for weeks, especially in the hardest-hit areas like southwest Florida, the NextEra Energy Inc unit said.

As the storm pushed north, outage figures were increasing at other large utilities, including units of Duke Energy Corp, Southern Co and Emera.

Duke’s outages held around 1.2 million on Monday afternoon, while Emera’s Tampa Electric utility said outages eased to about 320,000 from a peak earlier on Monday of over 330,000.

FPL said its two nuclear plants were safe. Both units at its Turkey Point facility, about 30 miles south of Miami, were shut by early Monday.

The company closed Turkey Point’s Unit 3 on Saturday as Irma approached the coast but decided not shut Unit 4 at that time because the hurricane track shifted away from the plant toward the western part of the Florida Peninsula. FPL shut Unit 4 on Sunday night, however, because of to a possible valve issue that was probably not related to Irma, U.S. Nuclear Regulatory Commission officials said on Monday.

At its St. Lucie nuclear plant about 120 miles north of Miami, FPL reduced power at Unit 1 because of salt buildup from Irma in the switchyard, NRC spokesman Roger Hannah said. The plant’s other reactor, Unit 2, continued to operate at full power. …

As Irma loomed and came ashore, gasoline stations struggled to keep up as people evacuated Florida. In the Atlanta metropolitan area, about 545 stations, or about 13.2 percent of the total, were out of the fuel earlier on Monday, according to information service Gas Buddy.

Irma is expected to sap demand for fuel for a time, Goldman Sachs analysts said in a note on Monday, but they cautioned that supply could remain strained because of refining capacity offline after Hurricane Harvey, which hit Texas two weeks ago.

2. a) As of Monday afternoon, why couldn’t Florida Power & Light (FPL) say when service would be restored to most customers?
b) How long will it be before power is restored to some homes and businesses – especially in southwest Florida?

3. FPL has two nuclear power plants, with 2 units at each plant. For what reasons did the company close three of the four units (both at Turkey Point near Miami and one of the two at St. Lucie)?

4. a) What number/percent of Atlanta-area gas stations were out of fuel by Monday?
b) Why is the gasoline supply expected to be short if the hurricane has reduced the demand for gas?

5. Read the “Background” below the questions. What is the reasoning behind how the power company restores power after outages?

6. Watch the videos under “Resources” below.
a) Restoring power to millions of homes and businesses in Florida (and Georgia) is a herculean task. Define herculean task.
b) Not having electricity can be frustrating. How would understanding the process for restoring power affect your outlook on the situation?

Florida Power & Light Company (FPL) is the third-largest electric utility in the United States, serving nearly 5 million customer accounts or an estimated 10 million people across nearly half of the state of Florida. (The population of Florida is 20.6 million.)

How we restore power

FPL will begin restoring power in multiple locations and follow an overall plan that calls for restoring power to the largest number of customers safely and as quickly as possible.  We don’t restore power based on when customers report an outage, where customers live or the status of accounts:

Prior to the arrival of Hurricane Irma, Florida Power and Light (FPL) assembled a restoration force of more than 13,500 including utility partners from 29 states: