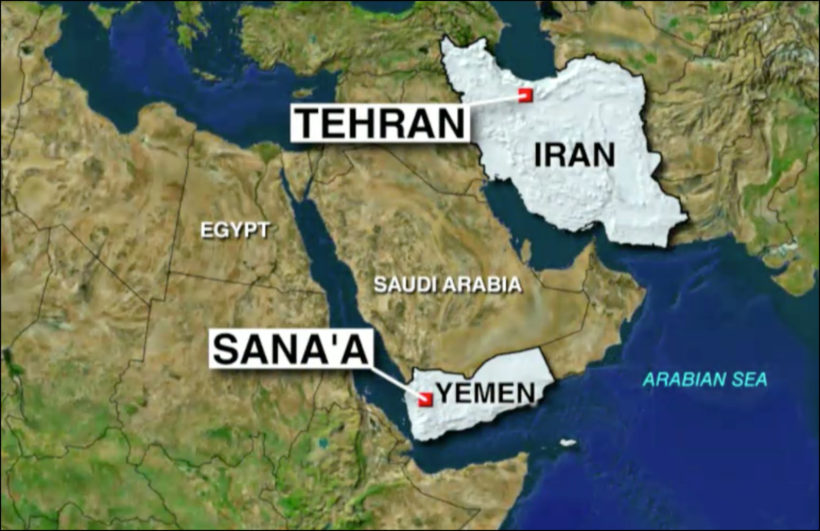 (from Agence France-Presse) Tehran – A senior Iranian commander warned the United States that a “fire might start” over an aid ship bound for Yemen on Wednesday after the Pentagon urged it to change course.

Brigadier General Masoud Jazayeri said it was Iran’s right to deliver relief supplies to Yemen as a humanitarian ceasefire takes hold and rejected Washington’s request that aid be taken instead to a United Nations hub to allay worries the cargo might be military.

“I should say frankly that Iran’s restraint has a limit,” Jazayeri, a deputy chief of staff, told Iran’s Arab-language Al-Alam television late on Tuesday.

“Saudi Arabia and its novice rulers and the Americans and others should know if they continue to create obstacles on Iran’s aid delivery a fire might start that would definitely be out of their control.

“My strict recommendation is that they let Iran and other countries deliver their humanitarian aid to Yemen.”

Saudi Arabia (a Sunni Muslim country), which has called a temporary halt in the nearly seven week air war it has led against Shiite rebels in neighboring Yemen, has repeatedly accused Iran (a Shiite Muslim country) of arming its coreligionists.

Both Iran, whose supreme leader Ayatollah Ali Khamenei last month denounced the air strikes in Yemen as genocide, and the rebels deny the allegation.

The Pentagon said Tuesday it was tracking the aid ship, named Iran Shahed, after an Iranian naval commander told state media that Tehran would send warships to escort it to Yemen.

Pentagon spokesman Colonel Steven Warren called for the ship to divert to Djibouti, where the UN has set up an aid hub across the narrow strait that separates Yemen from the Horn of Africa, to prove that its cargo was humanitarian.

“The Iranians have stated that this is humanitarian aid,” Warren told reporters in Washington.

“If that is the case, then we certainly encourage the Iranians to deliver that humanitarian aid to the United Nations humanitarian aid distribution hub, which has been established in Djibouti.” The Iranian Red Crescent has said the vessel is carrying 2,500 tons of humanitarian aid and has insisted that “no one has the right to inspect” it.

Foreign ministry spokesman Marzieh Afkham reiterated those remarks Wednesday, noting Iran hopes “that with the coordination of the UN aid office, supplies will reach Yemenis as soon as possible.”

But she added: “We will not permit countries involved in the Yemen war to inspect our ships carrying our humanitarian aid.”

Iranian officials have said the ship is bound for the rebel-held port of Hodeida on Yemen’s Red Sea coast and has 60 people on board.

They include seven anti-war activists from France, Germany and the United States, as well as 15 medical staff, 13 media representatives and 25 crew, according to Iranian media.

The standoff over the vessel raises the prospect of a potential confrontation between Washington and Tehran in the vital sea lane which links the Gulf and the Indian Ocean with the Mediterranean though the Suez Canal.

3. a) Why did the U.S. ask Iran to bring its ship to the UN hub in Djibouti? Be specific.
b) Why did Iran refuse to do so?

4. What threat/warning did Iran make after the U.S. request? Be specific.

5. a) What has the Saudi government accused Iran of doing?
b) How did Iran respond to this accusation?

6. A reader commented on the article:
“Just another example of how Iran has no desire to be truly a part of the civilized international community. Here is a perfect opportunity to deliver humanitarian aid to the UN depot, like others are doing. The Iranians, for some reason, don’t want to participate like the rest of the world. The obvious conclusion is that Iran doesn’t want anyone to see the cargo, because, perhaps it isn’t really humanitarian aid, as they claim. Iran has a bad habit of lying and defying international standards.”
Iran is a member of the UN.
The purpose of the U.N. (from its website) is “to bring all nations of the world together to work for peace and development, based on the principles of justice, human dignity and the well-being of all people.”
a) Do you think the UN should request (or demand) that Iran, as a member state, work with the UN aid hub? Explain your answer.
b) Do you think the UN is effective (doing the best it can) in carrying out its stated purpose, or is it irrelevant and/or inept? Explain your answer.

Recent interaction between Iran and the U.S.: