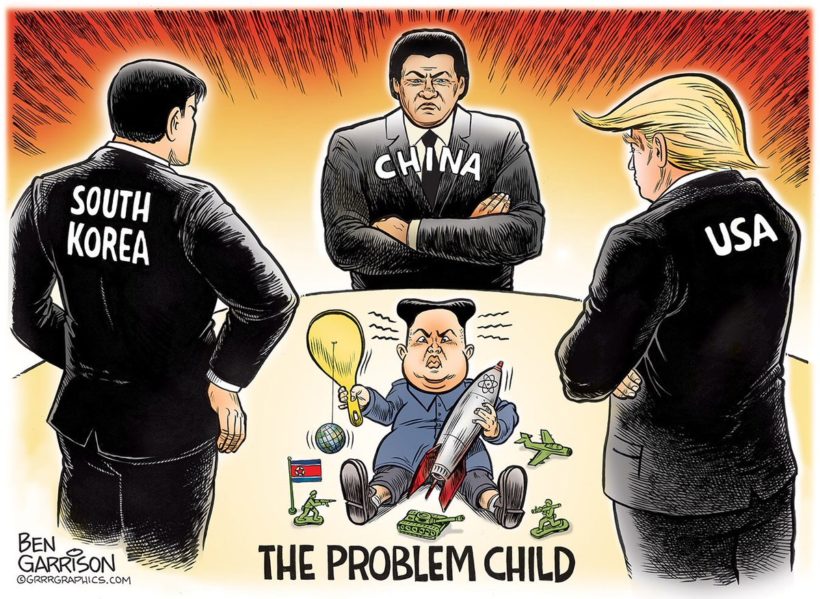 “I’m very proud to tell you that, as you may have just heard moments ago, China, their central bank has told their other banks — that’s a massive banking system — to immediately stop doing business with North Korea,” he said at the United Nations alongside South Korean President Moon Jae-in and Japanese Prime Minister Shinzo Abe.

The president went on, “Again, I want to just say and thank President Xi [Jinping] of China for the very bold move he made today. That was a somewhat unexpected move, and we appreciate it.”

[China is North Korea’s main trading partner which allows the regime to launder drug and illegal arms money.] The president spoke after signing an executive order aimed at companies and financial institutions that do business with North Korea.

“Foreign banks will face a clear choice to do business with the United States or facilitate trade with the lawless regime in North Korea,” he said.

President Trump [said] that his order will “cut off sources of revenue that fund North Korea’s efforts to develop the deadliest weapons known to humankind.” Early this month, North Korea conducted its sixth and most powerful nuclear test yet, and [soon after that] the country fired a missile over Japanese airspace.  Prime Minister Abe welcomed the new sanctions* enforced by the United States. [*sanctions are actions that are taken to force a country to obey international laws by limiting or stopping trade with that country, by not allowing economic aid for that country, etc.]

President Trump [said] the U.S. Treasury Department will begin identifying new industries that it can target with strong sanctions, like manufacturing, fishing and textiles.

“For much too long, North Korea has been allowed to abuse the international financial system to facilitate funding for nuclear weapons and missile programs,” said Trump.

He said the U.S. seeks a “complete denuclearization of North Korea.”

Treasury Secretary Steve Mnuchin…[told] reporters on Thursday, “No bank in any country should be used to facilitate Kim Jong Un’s destructive behavior. [Foreign financial institutions are on notice going forward. They can do business with the United States or North Korea, but not both.]”

The Secretary emphasized that “the action is directed at everyone” and not specifically China. [He added, “The objective is for North Korea to stop their missile tests and give up their nuclear weapons.”]

The new sanctions from the Trump administration come two days after he told the United Nations General Assembly that the U.S. would “totally destroy” North Korea if its leader, Kim Jong Un does harm to the U.S. or its allies.

“The United States has great strength and patience, but if it is forced to defend itself or its allies, we will have no choice but to totally destroy North Korea,” President Trump said Tuesday in his first address to the United Nations General Assembly.

“Rocket Man is on a suicide mission for himself and for his regime,” President Trump said, using an epithet he has recently adopted to refer to Kim. [Watch a video clip from the UN speech under “Resources” below.]

…During their meeting earlier on Thursday, Presient Moon praised Trump’s UN speech as “strong” and said he believes it will “help contain North Korea.”

“North Korea has continued to make provocations, and this is extremely deplorable, and this has angered me and our people,” Moon said. “The United States has responded firmly and in a very good way.”

“I’m happy you used the word ‘deplorable,'” Trump said, getting some laughs from the room. “I promise, I did not tell them to use that word.” …

[These latest developments follow a phone call President Trump had with Chinese President Xi Jinping. The two agreed on “maximizing pressure” on the rogue regime over its escalating weapons program…through vigorous enforcement of United Nations Security Council resolutions,” according to a White House statement.

On September 11th, the 15-member UN Security Council​ agreed unanimously to impose sanctions against North Korea in retaliation for successfully detonating a nuclear device earlier this month​ and for its recent launch of two intercontinental ballistic missiles.​ The penalties, which China and Russia supported, place severe restrictions on President Kim Jong Un’s government to import oil and textiles.]​

1. a) What announcement did President Trump make on Thursday while meeting with the president of South Korea and Prime Minister of Japan during UN week? Be specific.
b) Why is this good news?

3. a) What other industries will the Treasury Department target with sanctions, according to President Trump?
b) What is the goal of the new sanctions imposed by the Trump administration?

4. a) What did US Treasury Secretary Steve Mnuchin say about banks doing business with North Korea?
b) What is the objective of these sanctions, according to Secretary Mnuchin?

Watch President Trump’s statements to the UN about North Korea under “Resources” below. He talks in a much more direct manner than previous presidents and has succeeded in getting China to order their banks to stop doing business with North Korea.
a) Do you think President Trump will succeed in stopping North Korea before they are able to use nuclear weapons against the U.S. or our allies? Explain your answer.
b) Ask a parent or a grandparent the same question. (Remember, they have lived through this recent history and will be able to offer you a perspective you don’t have.) Discuss your answers.

6. In February 2016, CNN reported: “According to multiple experts, North Korea has at least a dozen and perhaps as many as 100 nuclear weapons, though at present it lacks sophisticated delivery mechanisms.” In a September 2016 Reuters article, ‘Maniacal recklessness’, the reporters characterize the U.S., South Korea, Japan, the UN… as “powerless to contain” North Korea’s nuclear weapons program. They quote a Japanese professor as saying the sanctions aimed to put pressure on North Korea “have reached their limits.” Ask a parent:
Do you think the U.S. and the UN are powerless to contain North Korea’s nuclear program? Can the Trump administration succeed where previous presidents have failed – or is he naive and should just either leave it up to the UN or resign the world to the prospect of a nuclear North Korea? Please explain your answers.

Watch a clip from President Bill Clinton’s Oct. 1994 “Remarks on the Nuclear Agreement With North Korea.” :

Watch a clip from President Trump talking about North Korea in his address to the UN General Assembly last week (9/19/17):

The U.S. led the UN Security Council to implement sanctions against North Korea in August and added more in September. Read the text from the UNSC.  September 11 sanctions and August 5, 2017 sanctions