Illegal border crossings from Mexico down 40% 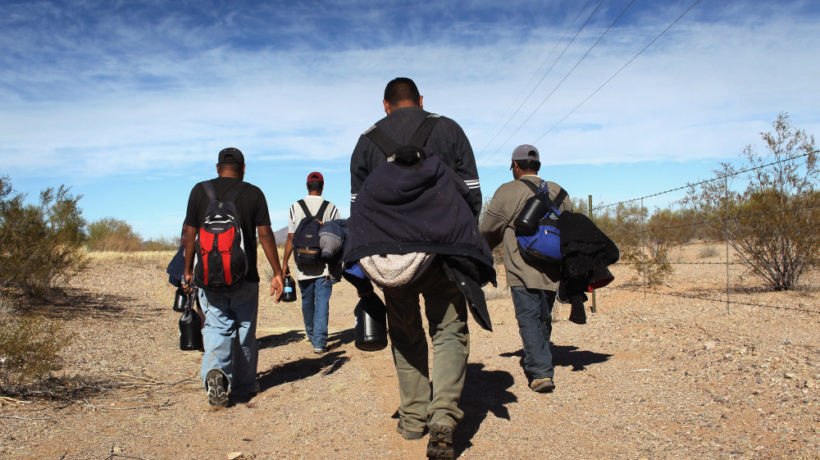 (by Andrew V. Pestano, UPI) — U.S. Secretary of Homeland Security John Kelly said there was a 40 percent decrease in illegal crossings from Mexico into the United States from January to February.

Citing data from U.S. Customs and Border Protection (CBP), Kelly said the “unprecedented decline in traffic” — which is measured by the apprehension and the prevention of entry of people illegally entering the United States — “shows a marked change in trends” since President Donald Trump won the U.S. presidential election, particularly since he took office.

“Since the administration’s implementation of executive orders to enforce immigration laws, apprehensions and inadmissible activity is trending toward the lowest monthly total in at least the last five years,” Kelly wrote in a statement on Wednesday. “This change in the trend line is especially significant because CBP historically sees a 10-20 percent increase in apprehensions of illegal immigrants from January to February. Instead, this year we saw a drop from 31,578 to 18,762 persons — a 40 percent decline.”

Kelly also said that due to changes in U.S. policy, “coyotes” — human smugglers hired to traffic people into the United States — have also increased their fees by about 130 percent, from $3,500 to $8,000. The higher price means fewer immigrants will likely pay to cross illegally, Kelly suggested.

“The decrease is also encouraging news because it means many fewer people are putting themselves and their families at risk of exploitation, assault and injury by human traffickers and the physical dangers of the treacherous journey north,” Kelly wrote. The number of unaccompanied children caught crossing the border was about 52,000 between October 2013 and June 2014.

Kelly this week said his agency is considering separating undocumented children from their parents if caught illegally crossing the border. [He explained that the primary objective of separating children from adults is to discourage further illegal entry via dangerous smuggling networks.

“Yes I’m considering [that] in order to deter more movement along this terribly dangerous network,” Kelly told CNN. “I am considering exactly that. They will be well cared for as we deal with their parents.  It is more important to me … to try to keep people off of this awful network.” (see video clip under “Resources” below)

Secretary Kelly began implementing the immigration enforcement changes ordered by President Trump on Tuesday, February 21. Of note: the changes exclude “dreamers” – illegal immigrants who came to the U.S. as children and others who had been given a reprieve in 2014.]

Reprinted here for educational purposes only. May not be reproduced on other websites without permission from United Press International (UPI). Visit the website at UPI .com.

BEFORE answering the questions, read the “Background” and watch the videos under “Resources” below.

2. How is the number of illegal border crossings from Mexico measured?

3. To what does Secretary Kelly attribute the decrease in illegal border crossings?

4. Why is the marked decrease in illegal border crossings significant?

5. a) What are coyotes?
b) Why does Secretary Kelly say the decrease in the number of people crossing the border is encouraging news? (What dangers do people face in paying a coyote to smuggle them into the U.S.?)

6. a) For what reason did Secretary Kelly say he would consider separating undocumented children from their parents if caught illegally crossing the border into the U.S.?
b) Watch the videos under “Resources” below. The media unsurprisingly portrays the consideration of this policy as inhumane. After hearing Secretary Kelly’s explanation, do you think it could be actually a compassionate policy? Explain your answer.

“It is in the national interest of the United States to prevent criminals and criminal organizations from destabilizing border security,” Kelly wrote in one of two memos released Tuesday by the department.

The changes exclude “dreamers” (illegal immigrants who came to the U.S. as children) and others given a reprieve in 2014. But outside those exemptions, Kelly wrote that DHS “no longer will exempt classes or categories of removable aliens from potential enforcement.”

A DHS official said the agencies are “going back to our traditional roots” on enforcement.

The memos cover a set of initiatives including: