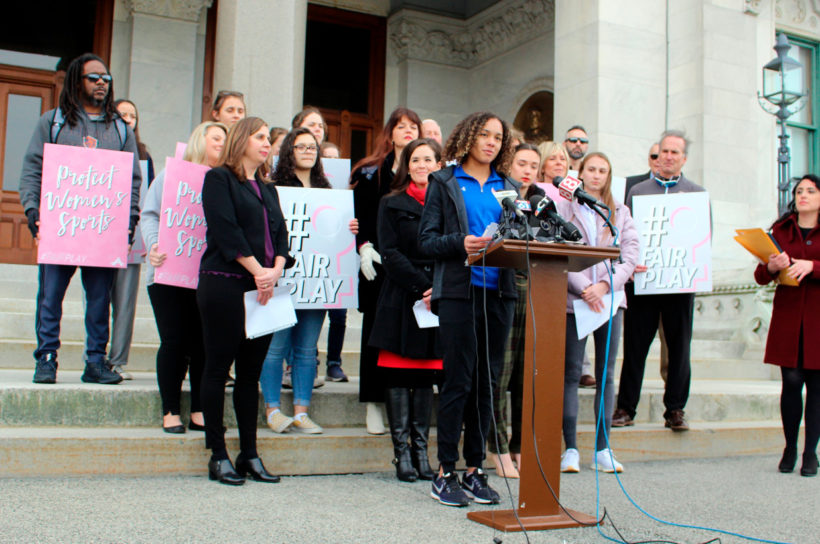 The Justice Department had backed Smith’s case last year during the Trump administration. (Smith, along with two other high school runners in Connecticut, Selina Soule and Chelsea Mitchell, have filed a federal lawsuit seeking to block transgender athletes from participating in girls’ sports.)

Smith, who is fighting the rule after placing below a transgender runner in a meet, [said during a TV interview] that she and other female athletes “have worked really hard to get our stories out there to get people to realize that fairness needs to be restored in our sport and in all other women’s sports.”

Smith hopes people will “realize that a lot of biological females have missed out on making it to meets that really matter…and the transgender athletes have taken spots on the podium that belong to biological females.”

“We train for so many days a week, so many hours to be able to be the best in our state and the best in our region and these biological males are just taking it away from us and we really deserve it.”

Smith’s attorney, Christiana Holcomb of the Alliance Defending Freedom, vowed the case will go ahead and called the DOJ’s decision “politically motivated.”

“What is even more concerning is this effort to gut [remove; get rid of] legal protections for women is not just isolated to what we see in Connecticut,” she said. “Even now, the Biden administration is pushing the so-called Equality Act, which ignores the real physical differences between men and women and threatens women’s privacy, women’s homeless shelters and yes, even women’s sports on a national level for female athletes like Alanna.”

“Title IX was designed to ensure that girls like Alanna have a fair and level playing field,” Holcomb concluded, “We want to move forward and we want to see women’s sports protected across the country.”

2. a) How has the Justice Department’s position regarding the three female high school athletes’ lawsuit changed from the stance it took under President Trump?
b) Do you support the new policy? Explain your answer.

3. What does Alanna Smith hope people will realize?

4. For what reasons is the girls’ attorney concerned about the Equality Act that is supported by the Biden Administration?

5. What is the goal of the lawsuit?

6. Do you think the three girls have a legitimate argument against having to compete with transgender athletes? Explain your answer.

7. Almost all of the viewers commenting on the ABC News report supported the girls’ position opposing having to compete against transgender athletes. The following are some of the viewer comments. With which do you agree most/least?

8. In a Feb. 25 commentary, Piers Morgan wrote in the UK Daily Mail:

…This is not me being ‘transphobic,’ it’s me stating an obvious fact.

That’s why we have gender-specific competition in almost every sport and events like the Olympics.

Put bluntly: Serena Williams is the greatest female tennis player ever but would be beaten by any of the Top 1000 men’s players.

And if this new (Biden) presidential endorsement of trans women’s rights to compete in women’s sport becomes the accepted norm, then women’s sport as we know it in America will be destroyed.

Do you agree with Mr. Morgan’s assertions? Explain your answer.

The lawsuit, filed Febuary 10 by the conservative nonprofit group Alliance Defending Freedom, asserts that the Connecticut Interscholastic Athletic Conference (CIAC)  policy allows “biological boys” to beat them at track events and deprives them of possible scholarships.

“Girls deserve to compete on a level playing field,” ADF attorney Christiana Holcomb said in a statement. “Forcing them to compete against boys isn’t fair, shatters their dreams and destroys their athletic opportunities.”

Holcomb is representing high school track athletes Selina Soule, Chelsea Mitchell and Alanna Smith — all of whom allege they have suffered since CIAC first implemented its policy in 2017 allowing athletes with male anatomy to compete alongside girls, the Connecticut Post reports.

“It is not fair for any boy to compete against girls,” Smith, the daughter of former Major League pitcher Lee Smith, said during Wednesday’s press conference. “That biological unfairness doesn’t go away because of what someone believes about gender identity.”

Smith insists her inclusion in the filing has nothing to with “lifestyle.”

“It’s simply about fairness of play,” she said.