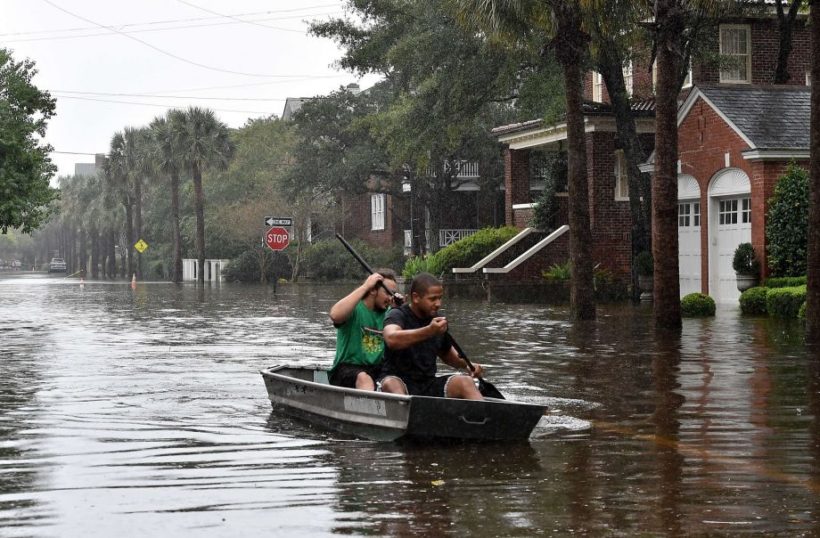 Two men row a boat on a flooded street in Charleston, S.C. More than 2 feet of rain has fallen on the region since Friday, and more is forecast.

During a news conference on Sunday afternoon, South Carolina Governor Nikki Haley said that the system carrying the epic rainfall is just sitting there.

“We haven’t seen this kind of rainfall in the low country in a thousand years,” she said. “That’s how big of a deal this is.”

Emergency management officials sent a statewide alert telling people to stay off roads and remain indoors unless their homes were in danger of flooding. Interstate highways were closed by flooding — including a 75-mile stretch of I-95 in the eastern part of the state that is a key route connecting Miami to Washington, D.C. and New York.

Nearly 30,000 customers were without power.

The National Weather Service reported that 13 inches of rain, the greatest three-day rainfall total on record, has been recorded at the service’s monitoring station at the Charleston International Airport, according to CBS affiliate WCSC in Charleston. The recorded daily rainfall total for Saturday was 11.5 inches of rain, setting a new one-day precipitation record for the airport.

The region around the state capital of Columbia was hit the hardest Sunday, with the city’s police department tweeting: “Too many roads to name that are flooded. Please heed our warning! DO NOT venture out!”

Sunday evening officials in Columbia said many residents are without drinking water because of water main breaks from the flooding. Officials say in a news release that greater downtown Columbia and southeast Richland County are most affected. They also say those affected should be prepared to be without potable water from the city system for three to four days. Earlier, the city issued a boil water advisory for all of its 375,000 customers.

Local officials said 100 people had been rescued by midmorning Sunday from vehicles after trying to cross flooded roads, while state officials reported a total of 200 swift-water rescues around the state. Columbia police said another 200 rescue calls were pending as of midmorning.

One of the hardest hit areas in Columbia was near Gills Creek, where a weather station recorded more than 18 inches of rain, nearly all of it in 24 hours. The creek was 10 feet above flood stage, spilling floodwaters that almost reached the stoplights at a four-lane intersection.

Meteorologist Chris Rohrbach says the Gills Creek gauge posted the highest amount of rain so far Sunday in an area hit by extensive flooding. He says the rainfall total would be higher by day’s end.

Hundreds of businesses, homes and apartments flooded, and dozens of boats fanned out to rescue trapped people.

CBS News’ David Begnaud caught up with a first responder team from Tennessee trying to locate someone who was reportedly swept away by the flood waters.

Vladimir Gorrin said he led his 57-year-old aunt through floodwaters about 7 feet deep surrounding her apartment near Gills Creek. He said his aunt, Wanda Laboy, waited several hours after calling 911, so family came to help.

His aunt, who doesn’t appear to be injured, is heading with him to his house in an unflooded area of Columbia, he said.

“I’m trying to find my way back home, and every road that we’ve taken is blocked or flooded,” he said in a phone interview inside the car with his aunt.

The Columbia Fire Department had 140 firefighters working around the county. Fire chief Aubry Jenkins said he’s lost count of how many rescues have been performed. No injuries or deaths have been reported.

“We’re just trying to get to everyone,” Jenkins said. “But there are places we just haven’t gotten to.” …

Emergency shelters were being opened around the state for displaced residents, and President Barack Obama declared a state of emergency in South Carolina.

The Columbia area received the most rain overnight into Sunday, with up to 14 inches reported in some places since Saturday, forecasters said. To the southeast, meanwhile, rainfall had exceeded two feet since Friday in some areas around Charleston, though conditions had improved enough that residents and business owners were allowed downtown on a limited basis.

The South Carolina Highway Patrol responded to more than 300 collisions around the state in the 12 hours leading up to 6 a.m. It cleared nearly 140 trees from roads. …

Charleston Mayor Joe Riley said it in an interview that it appears the torrential rainfall has passed, but moderate rain may continue for 24 hours. He said he’s never seen flooding as bad in his 40 years as mayor.

“This was a record storm,” he said. “You know the amount of rainfall that we have experienced is unprecedented. I feel very fortunate that we were able to get through this as well as we have.” …

The chance of rain in Charleston for Monday hovered around 60 percent, with the rest of the week alternating between partly cloudy and sunny conditions. Even though the rain was set to stop, the floods remained a threat. “Exceptionally high” rivers could further damage South Carolina into Wednesday — “even though it will be sunny by then,” said NBC News meteorologist Bill Karins.

1. What is significant about the rain that has fallen on South Carolina?

2. What warnings have officials been giving residents over the past few days?

3. What effect is the historic rainfall having on the residents of South Carolina? Describe the damage done. Be specific.

4. How much rain has actually fallen in South Carolina over the past few days?

5. How many people had to be rescued from floodwaters by Sunday?

6. a) Why haven’t emergency crews been able to rescue people who called for help as quickly as they hoped?
b) What did one man do after his distraught aunt had not been rescued in her flooded apartment building after several hours?

7. Charleston Mayor Joe Riley said he’s never seen flooding as bad in his 40 years as mayor. “This was a record storm,” he said. “You know the amount of rainfall that we have experienced is unprecedented. I feel very fortunate that we were able to get through this as well as we have.” Watch the news reports under “Resources” below the questions. What do you think about the job emergency responders are doing and how the residents of South Carolina are dealing with the flooding?

The Associated Press reports at least six weather-related deaths have been reported since rains began spreading over the Eastern Seaboard, which appeared to dodge the full fury of Hurricane Joaquin, which is veering out to sea. Gov. Haley said during a news conference Sunday afternoon there have been three weather related deaths in S.C.

The latest death to be reported was a driver who died on a rain-slickened road after his car crossed the center line on a state road in western North Carolina on Saturday, according to the state Highway Patrol.

High winds toppled a tree that hit a vehicle and killed a passenger Thursday near Fayetteville, North Carolina. Three people died in separate weather-related traffic accidents in South Carolina on Friday and Saturday, the Highway Patrol said. A drowning in Spartanburg, South Carolina, also was linked to the storm.

In Florence, about 80 miles east of Columbia, Mary Gainey was told Sunday about an evacuation order for her neighborhood along a rising creek.

“I’ve been rushing around, making sure I have everything I need,” said the 65-year-old Gainey. She’s going to stay at her daughter’s house until the water recedes.

“This is the first time we’ve had to be evacuated,” she said. “It’s strange leaving everything behind.” (from the CBS News article above)