Having Tattoos Could Be a Sign of Low Self-Esteem

(by Kate Devlin, Telegraph.co.uk) – Covering your body in tattoos like David Beckham is a sign of low self-esteem, a new study has found.

The body art, increasingly popular with celebrities such as Amy Winehouse and Angelina Jolie, could conceal a poor personal opinion of oneself, psychologists have found.

They warn that people considering a tattoo should think extremely carefully before submitting themselves to the needle and ink.

The study found that people who had three or more tattoos were likely to have low self esteem.

Marie Randle, from Liverpool Hope University, who carried out the study, said: “Tattooing has become more popular in recent years, especially among young women and there is a growing fascination with the tattoos of celebrities.

“The findings of this study suggest that tattoos are not just fashion accessories but driven by a wide range of motivational factors that are significantly associated with self-esteem.

“This strongly suggests that people consider getting tattooed should be encouraged to question their motivation before deciding to permanently change their appearance.”

Researchers questioned 48 people for the study, some of whom had tattoos covering much of their body.

They found that there were four main reasons why people got tattoos – to be rebellious, to belong to a group, for aesthetic reasons and because of a strong emotional attachment.

She added that not everyone who had a tattoo had poor self-esteem and that Beckham was unlikely to fit the bill.

“I think that David Beckham would be the exception to the rule. We found that having tattoos was just one predictor of self-esteem and not everybody who has tattoos has low self-esteem.”

The findings were presented at the British Psychological Society annual conference in Brighton.

1. What do psychologists warn people to do before getting a tattoo?

2. a) A study from Liverpool Hope University in England find what link between self esteem and multiple tattoos?
b) Are you surprised by this finding? Explain your answer.

3. List the four main reasons people have for getting tattoos.

5. Do you have a tattoo or know anyone who does? Ask a person older than 30 who has a tattoo if he/she regrets getting it. Ask a teen friend the same question. 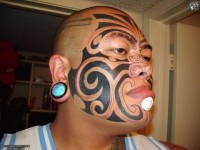