Gorsuch sworn in ahead of key Supreme Court cases 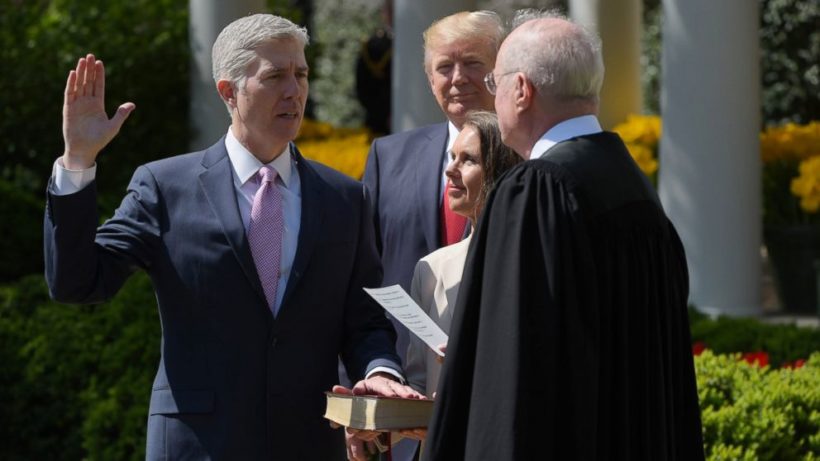 Neil Gorsuch was formally sworn in as the 113th justice of the Supreme Court on Monday. The new justice took two legally required oaths at separate ceremonies. The first was administered by Chief Justice John Roberts in private at the Supreme Court. Later, fellow Justice Anthony Kennedy administered an oath during a ceremony at the White House Rose Garden (above) with President Donald Trump and Vice President Mike Pence in attendance. (VOA)

(by Marisa Schultz, New York Post) WASHINGTON — Neil Gorsuch was sworn in as the 101st associate justice of the Supreme Court on Monday, restoring a conservative balance to the high court.

Chief Justice John Roberts Jr. administered the constitutional oath of office to Gorsuch in a private ceremony at the Supreme Court.

A public ceremony followed at the White House, where Justice Anthony Kennedy administered the judicial oath.

“To the American people, I am humbled by the trust placed in me today,” Gorsuch said, with his wife Louise and the Republican president standing behind him. “I will never forget that to whom much is given, much will be expected. And I promise you that I will do all my powers permit to be a faithful servant of the Constitution and laws of this great nation.”

Gorsuch will be the first justice to serve alongside a fellow justice — Kennedy — for whom he was a clerk.

Gorsuch will not have much time to get comfortable with his new job.

He’ll first appear on the bench Monday to finish out the current session of the Supreme Court, which runs through April.

He could be the deciding vote on a religious freedom case to come before the court April 19 – Trinity Lutheran Church v. Comer. The church in Columbia, Missouri, applied for a state grant for nonprofits wanting to upgrade playgrounds. The church was denied the funds, citing a provision in the state constitution that bars public aid going to churches.

The case has been long delayed and Gorsuch is seen as a likely favorable vote for the church, testing whether religious institutions have equal access to government programs.

[Gorsuch, 49, a fourth-generation Coloradan who sat on the US Court of Appeals for the 10th Circuit in Denver, will restore the ideological balance that existed before Scalia’s sudden death in February 2016 left a gaping vacancy. Gorsuch has praised the late Justice Antonin Scalia’s dedication to “textualism (originalism),” or the interpretation of laws based on the actual text rather than trying to decipher the “intent” of lawmakers or other potential consequences.

Gorsuch has been described as a constitutionalist who adheres to “originalism (also known as textualism)” when interpreting the U.S. Constitution.

…Gorsuch has also routinely ruled in favor of religious liberty, as Business Insider noted — siding with Hobby Lobby and Little Sisters of the Poor who said Obamacare’s contraceptive mandate violated their religion because it required them to pay for abortifacients like the Morning After pill. He wrote that federal courts should give strong consideration to religious beliefs: “It is not for secular courts to rewrite the religious complaint of a faithful adherent, or to decide whether a religious teaching about complicity imposes ‘too much’ moral disapproval on those only ‘indirectly’ assisting wrongful conduct,” he noted in a concurring opinion.

The Harvard grad is a conservative Republican and a champion of religious liberty known for his easy to understand writing style.

Gorsuch has written against euthanasia and assisted suicide, the latter of which Colorado legalized last November. “All human beings are intrinsically valuable and the intentional taking of human life by private persons is always wrong,” he wrote in his 2006 book “The Future of Assisted Suicide and Euthanasia.”

The Senate unanimously voted to confirm Gorsuch to the 10th Circuit Court of Appeals in 2006.

In a 2005 article in the conservative National Review, Gorsuch argued that “American liberals have become addicted to the courtroom, relying on judges and lawyers rather than elected leaders and the ballot box, as the primary means of effecting their social agenda.”

A study led by Mercer University law professor Jeremy Kidd concluded that Gorsuch was the second-most similar to Scalia of the 21 prospective justices on a list Trump released during the presidential campaign.]

1. What will Neil Gorsuch be the first Supreme Court Justice to do?

2. When will Justice Gorsuch begin his tenure on the Supreme Court?

3. Why could Justice Gorsuch be the deciding vote on a religious freedom case to come before the court on April 19?

4. What type of judge is Neil Gorsuch?

5. What is textualism (originalism)?

6. Read the “Background” below the questions. Consider the following:

This can be confusing, and possibly boring:) to some of you, but it is important that you understand the issue in order to be a good citizen and an educated voter. Do you support constitutionalist or activist judges? Explain your answer.

Scalia was the most eloquent and passionate advocate of “original understanding” — the notion that judges should decide a law’s constitutionality by its actual words, not the “intent” behind it or the needs of society:

“It is not supposed to be our judgment as to what is the socially desirable answer to all of these questions,” he said. “That’s supposed to be the judgment of Congress.”

Indeed, he wrote in one of his many memorable opinions:

“A system of government that makes the People subordinate to a committee of nine unelected lawyers does not deserve to be called a democracy.”

He believed not in a “living” Constitution, subject to “the passions of the moment that may cause individual liberties to be disregarded,” but an “enduring” one, dedicated to federalism and the separation of powers.