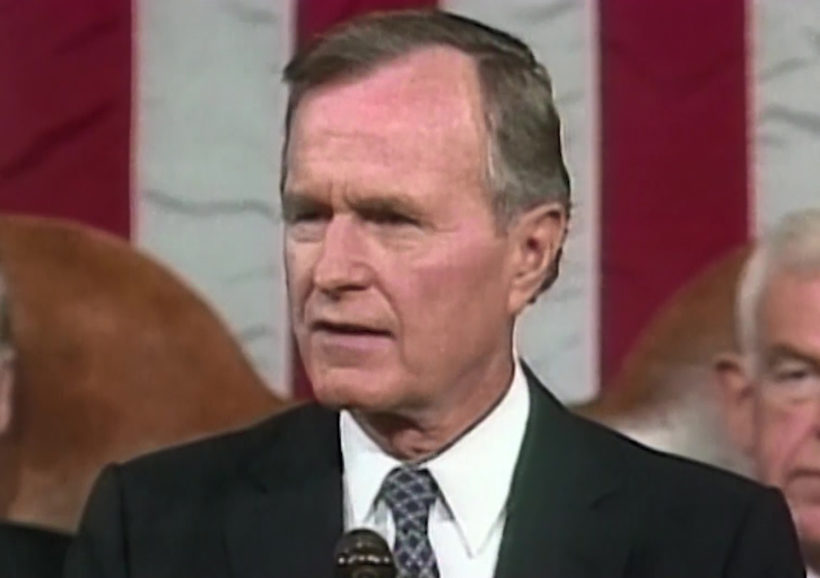 President Trump proclaimed Wednesday, December 5, a National Day of Mourning for former President George H.W. Bush, who died on Friday at the age of 94.

All executive offices and agencies of the federal government will close to “pay homage to the memory” of the 41st president.

The former president will be given a state funeral Wednesday at the National Cathedral in Washington, D.C. After the ceremony, his body will be moved to Texas, where he will be buried at his presidential library.

HOUSTON/WASHINGTON (Reuters) – Tributes to former U.S. President George H.W. Bush, who died at the age of 94, poured in from around the world on Saturday as global leaders honored him.

Bush, the 41st U.S. president who served in the office from 1989 to 1993, played a role in helping to end the Cold War. He also routed President Saddam Hussein’s Iraqi army in the 1991 Gulf War but lost his chance for a second term in the White House after breaking his no-new-taxes pledge. [He was known for the promise, “Read my lips, no new taxes,” which he unfortunately broke.] …

Bush, who also served for eight years as U.S. vice president during Ronald Reagan’s two-term presidency and earlier as head of the CIA, died on Friday night at his home in Houston. …

Speaking in Buenos Aires at the G20 summit, U.S. President Donald Trump [said of Bush]: “He was a very fine man. I met him on numerous occasions. He was just a high-quality man who truly loved his family. He was a terrific guy and he’ll be missed. He led a full life, and a very exemplary life, too.” Trump said he spoke on Saturday to George W. Bush and Jeb Bush about their father’s death.

The White House said a state funeral will be held on Wednesday at the National Cathedral in Washington. Trump, who plans to attend the funeral with first lady Melania Trump, also designated Wednesday as a national day of mourning, and ordered the lowering of the American flag for 30 days. …

Bush, [at the age of 18, one of the youngest] naval aviators during World War Two, was the father of former President George W. Bush, who served two terms in the White House in the 2000s, and former Florida Governor Jeb Bush, who unsuccessfully sought the 2016 Republican nomination for president. Like his sons, he was a Republican. [He was considered by conservatives as an establishment Republican and a moderate.] …

Bush’s death came seven months after that of his wife, former first lady Barbara Bush, to whom he was married for 73 years. …

“The entire Bush family is deeply grateful for 41’s life and love, for the compassion of those who have cared and prayed for Dad, and for the condolences of our friends and fellow citizens,” George W. Bush said in a statement.

At a gate outside the Houston neighborhood where the Bushes lived, residents on Saturday created a makeshift memorial by laying flowers before a U.S. flag. …

Bush served as president during the fall of the Berlin Wall in 1989. [During a speech in West Berlin in 1987, President Reagan famously called for the leader of the Soviet Union, Mikhail Gorbachev, to open up the wall which the Soviets had erected to keep East Berliners in communist-controlled East Berlin and prevent them from escaping to the democratic free West Berlin. Reagan said, “Mr. Gorbachev, open this gate. Mr. Gorbachev, tear down this wall!” In 1982, he’d said, “I’d like to ask the Soviet leaders one question […] Why is the wall there?” and in 1986, when asked if he thought the wall could be “torn down,” Reagan said, “I call upon those responsible to dismantle it [today].”]

Responding to President Bush’s death, British Prime Minister Theresa May said, “His ethos of public service was the guiding thread of his life and an example to us all. In navigating a peaceful end to the Cold War, he made the world a safer place for generations to come.”

Russian President Vladimir Putin said Bush “faithfully served his country all his life – with a gun in his hand during the war years and in high government roles in peacetime,” according to Russian state news agency TASS.

George Herbert Walker Bush, a Connecticut Yankee who came to Texas to be an oilman, died as the patriarch of a Republican political dynasty. He and George W. Bush were only the second father and son to hold the office of president, after John Adams (1797-1801) and John Quincy Adams (1825-1829).

His second son, Jeb, undertook his own campaign for the presidency in 2015 before dropping out [due to scant voter support]. Bush’s father, Prescott Bush, was a U.S. senator from Connecticut.

President Trump signed an order closing the federal government on Wednesday in a show of respect for Bush. The New York Stock Exchange and Nasdaq will also be closed on Wednesday in his honor.

Bush’s body arrived at the U.S. Capitol on Monday and was to lie in state through Wednesday morning. The public was able to line up to view Bush’s casket continuously from Monday evening until Wednesday morning.

Trump ordered the presidential plane (Air Force One) to be flown to Houston to bring Bush’s body to Washington. … Bush’s body will be returned to Houston on Wednesday and a service will be held on Thursday at St. Martin’s Episcopal Church there.

Bush’s casket will then travel by train from nearby Spring, Texas to College Station. He will be buried on Thursday on the grounds of his presidential library at Texas A&M University, the school said. He will be buried in a family plot next to his late wife. …

Bush did not endorse fellow Republican Trump, the eventual winner of the 2016 presidential election who [criticized “low energy”] Jeb Bush during his campaign. He did not publicly say whom he voted for in the election, but a source told CNN he voted for Trump’s Democratic opponent, Hillary Clinton.

Bush did send Trump a letter in January 2017 saying he would not be able to attend his inauguration because of health concerns, but wishing him the best.

1. What three things was George H.W. Bush known for as president, according to the Reuters reporters?

2. List all government positions Bush held in his lifetime.

3. What actions will be/have been taken to honor President Bush?

4. a) What does it mean to ‘lie in state’?
b) What is the purpose of a national day of mourning? Who usually receives that honor?
c) What is a state funeral?

5. During his presidency, the media was regularly critical of President Bush, even though he was a moderate Republican. What is not highlighted in most news reports about his presidency is that Bush was not re-elected to a second term because so many Republican voters were angry that he broke his promise to not raise taxes. At the Republican convention when he was first nominated, he famously promised, “Read my lips, no new taxes.”

In 1992, many Republicans voted for third party Independent candidate Ross Perot, who won 19% of the popular vote. Democrat Bill Clinton won 43% and George Bush 37.4%. It is believed that Bush had been elected to a first term because he was Ronald Reagan’s VP and on his promise to not raise taxes and that he lost a second term because he broke his promise.

This is what the average Republican voter would remember about him more than that he played a part in ending the Cold War. In fact, Ronald Reagan’s two terms in office played a major role helping end the Cold War.

Challenge: Read/watch several news reports on President George H.W. Bush.
a) What aspects of his life and his presidency are highlighted?

b) When a person dies, the good things he/she did should be remembered. George H.W. Bush was a patriot, public servant and a loving family man. It is also important to report accurately on a politician’s role in office, especially the president.
Ask several Republican voters who voted in the 1988 and 1992 elections what they remember most about George H.W. Bush’s presidency.
-How many answer the Gulf War and “Read my lips, no new taxes”?
-How many say the part he played in ending Cold War?
-How many knew he had been the youngest fighter pilot in WWII, and had after many missions been shot down in the sea and then saved by an American sub?

George H. W. Bush had first sought the presidency in 1980, campaigning on experience gathered as a U.S. congressman from Texas, envoy to China, director of the Central Intelligence Agency, United Nations ambassador and chairman of the Republican National Committee.

Reagan, the former governor of  California [and stalwart conservative, beat] the moderate Bush in the Republican primaries but chose him as his running mate.  …

The high points of Bush’s presidency included the end of the Cold War, which brought the dissolution of the Soviet Union and its hold on former Eastern Bloc countries.

“He was the only one of the world leaders at the time (who) did so much to overcome communism and help Poland,” said Lech Walesa, the former head of Poland’s Solidarity trade union who led protests and strikes that shook communist rule in the 1980s.  “He will remain in hearts and memory forever,” Walesa said on Twitter.

Bush won a decisive victory in ousting Saddam’s Iraqi army from Kuwait, bringing him popularity at home, and made progress on Middle East peace. But Bush’s foreign affairs victories were overshadowed by a stagnant economy at home. He broke his “read my lips” pledge not to raise taxes and lost his 1992 re-election bid to Clinton, a Democrat.

Bush, who was born on June 12, 1924, in Milton, Massachusetts, grew up wealthy, attending elite schools but putting off college so he could enlist in the Navy at 18. He flew 58 missions off aircraft carriers in World War Two and survived being shot down over the Pacific Ocean.

After returning from the war, he married Barbara Pierce, with whom he would have six children. After he graduated from Yale University [in 2 1/2 years,] the Bushes headed to the oil fields of West Texas.

It was there that Bush became involved in politics, first losing a U.S. Senate race in 1964 before winning election to the U.S. House of Representatives in 1966.

After two terms and another failed Senate bid in 1970, he was appointed by President Richard Nixon as U.S. ambassador to the United Nations. In 1974, President Gerald Ford made him an envoy to China and later director of the CIA. (from the Reuters article above)

“Read my lips: no new taxes” is a phrase spoken by then-American presidential candidate George H. W. Bush at the 1988 Republican National Convention as he accepted the nomination on August 18. The pledge not to tax the American people further had been a consistent part of Bush’s 1988 election platform, and its prominent inclusion in his speech cemented it in the public consciousness. The impact of the election promise was considerable, and many supporters of Bush believe it helped Bush win the 1988 presidential election.

The line later hurt Bush politically. Although he did oppose the creation of new taxes as president, he made a deal with the Democratic-controlled Congress: he would agree to raise taxes and Congress would cut government spending. Bush agreed to the compromise and taxes were raised. Unfortunately, the Democrat-led Congress then did not cut spending.

In the 1992 presidential general election, Democratic nominee Bill Clinton, running as a moderate, questioned Bush’s trustworthiness. Bush lost his bid for re-election to Clinton, prompting many to suggest his failure to keep the pledge as a reason for his defeat. (excerpted from Wikipedia)

“Read my lips, no new taxes” – Presidential candidate George H. W. Bush at the 1988 Republican National Convention as he accepted the nomination:

This is video footage of US fighter pilot George H.W. Bush being rescued at sea by the USS Finback on September 2, 1944. Provided by the George Bush Presidential Library and Museum: