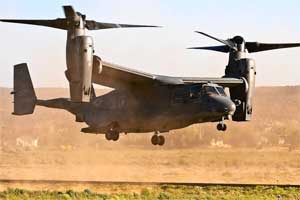 (by Stephanie Simon, The Wall Street Journal, WSJ.com) – The U.S. Air Force thinks the rough-hewn peaks of southwest Colorado and northern New Mexico make excellent surrogates for the treacherous mountain ranges in global hotspots such as Afghanistan. Some local residents beg to differ.

In a bid to provide Special Operations pilots more realistic simulations of wartime missions, the Air Force has proposed a vast new tactical training zone that stretches across 94,000 square miles of rugged terrain. Starting next year, commanders want to send C-130 transport planes and CV-22 Osprey (photo on right) tilt-rotor aircraft skimming across the region after dark at altitudes as low as 200 feet and speeds of up to 288 miles per hour. They envision three sorties [missions] a night.

The pilots would dart among the ridges and dip low over the rangeland, practicing the stealth needed for covert [secret] operations, said Col. Stephen Clark, wing commander at New Mexico’s Cannon Air Force Base, which is pushing the proposal.

Pilots would be required to avoid cities in the zone, including Santa Fe and Taos in New Mexico and Aspen, Pueblo and Durango in Colorado. But communities and residents fighting the Air Force say that hundreds of low-altitude flights each year will spook cattle, scare children, rattle adobe buildings, create pollution and mar the tranquility they cherish.

“Our economy is based on people coming here for the beauty of the land, the solitude, the wild qualities,” said Cliff Bain, who lives in Arroyo Hondo, N.M., north of Taos. He started an opposition group called Peaceful Skies.

At least four county commissions and two city councils have taken a stand against the proposal, and the Air Force has received 1,200 comments, most expressing concern about the proposal.

The vocal opposition to the new training zone disturbs some civic leaders who fear that Cannon Air Force Base, an economic anchor for eastern New Mexico, might be vulnerable to future cutbacks if pilots based there can’t properly prepare for missions. 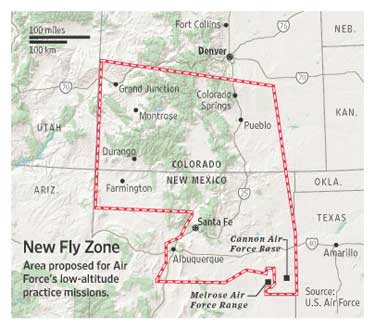 Others say putting up with occasional noise is a small sacrifice to ensure adequate training for the military.

“We always thank our servicemen and our veterans. We pray for their safety,” said Chris Calvert, a former Air Force pilot who now serves on the Santa Fe City Council. “To then turn around and say, ‘But we don’t want to be inconvenienced in the least by your getting the training you need’ is hypocritical.”

Mr. Calvert is working on a resolution that does not oppose or endorse the proposal, but urges the military to minimize the impact on people and wildlife.

Military officers say the fears are overblown. The Air Force already sends pilots zipping across the region, at times as low as 200 feet above the ground, though current regulations have the effect of limiting night sorties to a half-dozen well-surveyed routes, Col. Clark said.

Under the new proposal, pilots would be allowed to map their own routes through the tactical training zone, increasing the challenge and realism of the training, Col. Clark said. It would also tend to disperse the noise and disruption across a broader area. He said he doesn’t anticipate that any one village or ranch would experience the aircraft overhead more than a couple times a month.

Col. Clark said the military has not measured noise levels of aircraft flyovers at 200 feet. For someone standing on the ground, aircraft at an altitude of 500 feet would create a sound exposure of 91 to 95 decibels, or “somewhere between a lawn mower and a chain saw,” he said.

The Air Force has hired a consultant to assess potential environmental impacts,which will be the subject of public comment next spring, after which Special Operations commanders will decide whether to scrap, revise or implement the proposal.

Kathleen Dudley plans to throw herself into fighting the Air Force should commanders choose to move ahead. A writer in Mora, N.M., northeast of Santa Fe, Ms. Dudley said she and her husband were eating lunch on their deck recently when a military aircraft screamed overhead, flying so low “that we were looking into the eyeballs of a pilot bearing down on us.”

“I was terrified,” she said. “You don’t hear or see them until they’re upon you, and then it’s like being in a war zone.”

Write to Stephanie Simon at stephanie.simon@wsj.com.

NOTE: This article was first published November 8, 2010 on wsj.com.

1. a) Where does the Air Force want to establish a new training zone for Special Operations (Special Ops) pilots?
b) When do they want to begin the program?
c) What specifics are known about the program?

2. Why does the Air Force want to use the area they have chosen for their training?

3. For what reasons do communities and residents fighting the Air Force plan oppose it?

4. Why are some civic leaders concerned about the opposition to the Air Force plan?

5. How is the Air Force responding to opposition to the plan? Be specific.