Flooding Hinders Shipping on the Mississippi

(by Alan Sayre and Holbrook Mohr, WashingtonTimes.com) JACKSON, Miss. (AP) – Cargo was slowly moving along the bloated Mississippi River after a costly daylong standstill, while officials kept an eye on the Lower Delta, where thousands of acres of farmland could be swamped by water that is inching closer to the top of a levee.

The Coast Guard for much of Tuesday closed a 15-mile stretch at Natchez, Miss., north of New Orleans, blocking vessels heading toward the Gulf of Mexico and others trying to return north after dropping off their freight.

Later in the day, barges that haul coal, timber, iron, steel and more than half of America’s grain exports were again allowed to pass, but at the slowest possible speed. Such interruptions could cost the U.S. economy hundreds of millions of dollars for each day the barges are idled, as the toll from the weeks of flooding from Arkansas to Louisiana continues to mount.

Wakes generated by passing barge traffic could increase the strain on levees designed to hold back the river, officials said.

Natchez Mayor Jake Middleton said he had met Monday with Maj. Gen. Michael Walsh and other officials when they discussed the river closing, the latest tough move to try to ensure the levees are not breached.

“You have two hospitals, a convention center, a hotel and a spa on the Louisiana side. On our side, we have a restaurant and bar and several very old, historic buildings that we are trying to save,” Mr. Middleton said.

Coast Guard Cmdr. Mark Moland said tests indicated sandbagging and other measures to protect most of the area could withstand the wakes if the vessels were ordered to move through at the slowest possible speed. It’s not clear how long barges would be able to move only one at a time. The river is expected to stay high in some places for weeks. …..

In Vidalia, La., across the river from Natchez, Carla Jenkins was near tears as she watched the first tows and barges move north after the reopening.

“The water from the wakes just keeps coming into our buildings. We’re going to have a lot more damage,” said Ms. Jenkins, who owns Vidalia Dock and Storage.

Some of the worst flooding in Mississippi is in the area from Vicksburg northeast to Yazoo City, along the Yazoo River. The Yazoo Backwater Levee north of Vicksburg connects with the main Mississippi River levee. U.S. Army Corps of Engineers officials previously predicted that at least a foot of water could pour over the top, flooding tens of thousands of acres of farmland in the Delta.

The corps brought in new gauges and did another analysis and now believes the levee will be overtopped by only inches, if at all, agency spokesman Wayne Stroupe said.

If the levee overtops, it likely will be when the gauges at Vicksburg reach 57.2 or 57.3 feet. The Mississippi River is projected to crest Thursday there 57.5 feet, more than a foot above the 1927 record.

But after the crest, it could be days before the water starts going down, Mississippi Gov. Haley Barbour said Wednesday morning on CBS’ “The Early Show.”

“There’ll be areas in the Mississippi Delta that’ll still be flooded, not only in the middle of June, some into late June,” Mr. Barbour said. …..

Throughout the spring, the Mississippi is a highway for barges laden with corn, soybeans and other crops headed from the Midwest to ports near New Orleans, where they get loaded onto massive grain carriers for export around the world. The closure helped push corn, wheat and soybean prices higher Tuesday. …..

On a typical day, some 600 barges move back and forth along the Mississippi, with a single vessel carrying as much cargo as 70 tractor-trailers or 17 rail cars, according to Bob Anderson, spokesman for the Mississippi Valley Division of the Army Corps of Engineers.

Also Tuesday, at least 10 freight terminals along the lower Mississippi between Baton Rouge and New Orleans suspended operations because of high water. Vessels scheduled to use the terminals will either have to wait out the high water or divert elsewhere. Delaying a vessel by even a single day often costs $20,000 to $40,000, port officials said.

The closure at Natchez was the third in a series of recent moves designed to protect homes and businesses behind levees and floodwalls along the river.

Over the weekend, the corps opened the Morganza Spillway, choosing to flood rural areas with fewer homes to protect Baton Rouge and New Orleans. Another spillway near New Orleans was opened earlier, but it did not threaten homes.

Deputy Chief John Dolan of the Vicksburg police said a levee around an old refinery collapsed Monday, letting water onto the property and sending gas fumes into the air. Environmental experts tested the air and found no immediate danger, he said. …..

1. a) Define commerce.
b) How is the Mississippi River used for commerce?  Be specific.

2. Why did the U.S. Coast Guard close a 15 mile stretch of the Mississippi River to barge traffic for most of Tuesday?

3. After re-opening the river, what requirements did officials place on barges traveling on the river? Why did they do this?

4. a) How is the closure and following speed restrictions affecting commerce in the U.S.?
b) What effect did the high water have on freight terminals in Louisiana?

5. a) What is the population of the cities of Baton Rouge and New Orleans?
b) Watch the news video under “Resources” below.  Do you support the Army Corps of Engineers decision to force the flooding into rural areas in order to save highly populated/industrial areas? 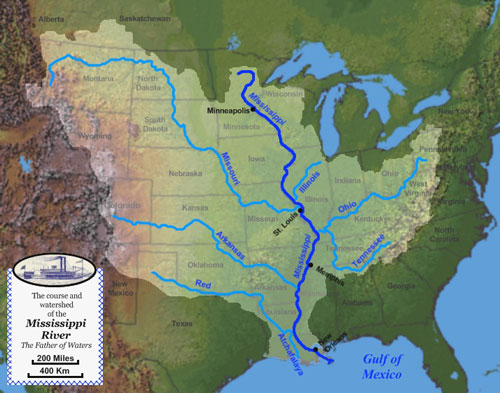 Watch a news video on the flooding below: