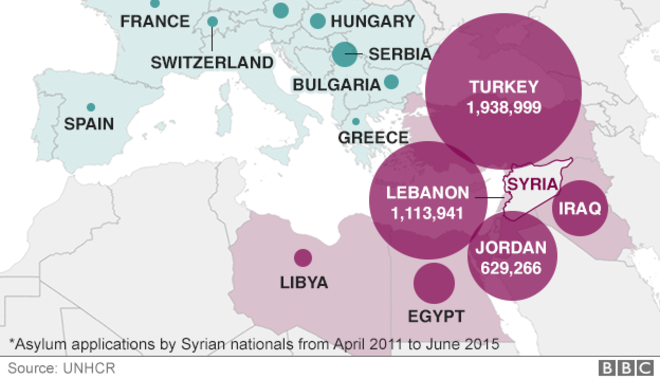 (by Del Quentin Wilber, Los Angeles Times) – Federal agents are reinvestigating the backgrounds of dozens of Syrian refugees already in the United States after discovering a lapse in vetting that allowed some who had potentially negative information in their files to enter the country, two U.S. law enforcement officials said.

Agents have not concluded that any of the refugees should have been rejected for entry, but the apparent glitch — which was discovered in late 2015 and corrected last year — prevented U.S. officials who conducted background checks on the refugees from learning about possible “derogatory” information about them, the two officials said. At a minimum, the intelligence would have triggered further investigation that could have led some asylum applications to be rejected.

The refugees whose cases are under review include one who failed a polygraph test when he applied to work at a U.S. military installation overseas and another who may have been in communication with an Islamic State leader, according to the officials, who spoke on condition of anonymity because they were not authorized to discuss the matter.

The officials cautioned that the investigations, which began last year under the Obama administration, were preliminary [just beginning], and often the initial red flags turn out to be mistakes or benign [harmless]. For example, someone could speak to an Islamic State militant without knowing about that affiliation, they said.

But the vetting gap raises questions about the Syrian refugee screening process, which the Obama administration had often described as exhaustive and rigorous, but which President Trump has criticized as a national security risk.

[Despite the fact that 53% of Americans were opposed to his plan,] President Obama ramped up [increased] the acceptance of Syrians last year to address the humanitarian crisis in that country, admitting 15,479 Syrian refugees, a 606% increase over the 2,192 admitted in 2015. Since the civil war started, the U.S. has accepted more than 18,000 Syrians seeking asylum, according to the State Department.

The vast majority pose no threat, officials say. Nearly half of the Syrians admitted since 2011 were under the age of 14, and more than half are female. At least 4 million people have fled war-torn Syria since the civil war erupted in 2011. [More than 6 million are internally displaced in Syria.]

But during the fall campaign, Trump argued that terrorists might seek to hide among refugees like “a great Trojan horse.” He called for “extreme vetting” and pledged to block Muslims from entering the country. He later backed off the ban on Muslims and said he would suspend immigration “from any nation that has been compromised by terrorism.” Since taking office, Trump has been considering a temporary shutdown in the Syrian refugee program.

The 21-step screening process for Syrian refugees is among the most rigorous for anyone seeking to enter the United States. Typically, the refugees are first screened by the United Nations and then referred to the U.S. State Department and other countries for potential resettlement. As they review the applications, U.S. law enforcement and intelligence officials check the names and identities against databases. The process includes the CIA, the Department of Homeland Security, the FBI, the National Counterterrorism Center, the State Department and the Department of Defense.

The results of those checks are passed along to Citizenship and Immigration Services, which sends officers to foreign countries to interview the refugees to assess their credibility.

The vetting gap stemmed from a technological issue that for a period of time limited how agents searched CIA databases during the background check process, the officials said. As U.S. intelligence agents cross-checked refugees’ names and biographical information against CIA databases, the computer systems were not initially set up to automatically inspect data contained in “attachments” to the records, the officials said.

Such attachments can include cellphone numbers, address books, social media postings, arrest reports and intelligence assessments, one of the the law enforcement officials said.

The second law enforcement official likened the problem to searching for a name in the body of an email but failing to also search for the name in attachments to the email.

The increased numbers of Syrians being cleared to enter the U.S. at first taxed the intelligence agencies responsible for checking applicants against the vast holdings of the intelligence community. But the CIA managed to expand the database capabilities early last year to allow authorities to search the attachments, the officials said.

As investigators reexamined the cases for red flags, they discovered at least several dozen that now require further investigation by the FBI and Department of Homeland Security, the officials said.

If investigators determine that a refugee is a threat or has ties that would have blocked his or her entry into the United States, the Justice Department must petition an immigration judge to remove them from the country. No such process is underway, officials said. The Times first learned about the issue from law enforcement officials before Trump’s inauguration.

Leon Rodriguez, who served until last week as the director of U.S. Citizenship and Immigration Services, defended the integrity of the vetting process his former agency spearheaded.

“I still have a lot confidence in what we were doing, especially in the fact that the people we admitted were thoroughly vetted,” he said. Rodriguez declined to address any potential vetting gap.

Officials at the Department of Homeland Security referred calls to Citizenship and Immigration Services. In a statement, the immigration agency declined to discuss specifics about the vetting process, but said improvements were continually being made.

The immigration agency “continues to work with the law enforcement and intelligence communities to look for ongoing opportunities for improvements for screening all categories of applicants, including the security checks for refugee applicants,” the statement said.

The CIA declined to comment. A U.S. intelligence official, who requested anonymity to discuss the closely held vetting process, said refugees go through the “highest level of security checks” of any type of traveler coming to the U.S.

“No immigration program is completely without risk,” the official said. “We continuously examine options for further enhancements for screening refugees.”

Testifying before Congress in September, Rodriguez said the U.S. government had rejected about 7% of applicants and placed another 14% on hold for further investigation. He noted that since the 2001 terror attacks, “not a single act of terrorist violence has been committed by a refugee who has undergone our screening procedures.”

Refugee applications have been re-screened before. In 2011, the files of more than 58,000 Iraqi refugees already living in the U.S. were vetted after the FBI learned that an Iraqi man living in Kentucky had participated in [terrorist actions] – roadside bomb attacks – in Iraq before he was granted asylum. He and another Iraqi refugee were arrested by the FBI and pleaded guilty in 2013 to trying to send explosives and missiles to Al Qaeda in Iraq.

Reprinted here for educational purposes only. May not be reproduced on other websites without permission from the Los Angeles Times. Visit the website at latimes .com.

NOTE TO STUDENTS: This article is quite lengthy and might seem slightly complicated, but is important to understand. To aid your comprehension:

2. Describe the “glitch” in the vetting process for Syrian refugees being brought into to the U.S. by President Obama. (see para. 1-2, 11-13)

3. a) When was the “glitch” in the refugee vetting system discovered?
b) How long did it take the government to fix this issue?

4. What number of refugees admitted to the U.S. are being re-vetted because of red flags? (See para. 15 – what number is several dozen?)

5. The reporter writes in para. 2, “At a minimum, the intelligence would have triggered further investigation that could have led some asylum applications to be rejected.” Why would the applications of some Syrian refugees have been rejected?

6. a) What assurances have Obama administration officials given about the threat posed by Syrian refugees? (see para. 7)
b)

7. Testifying before Congress in September, Leon Rodriguez, then-Director of U.S. Citizenship and Immigration Services, noted that since the 9/11 terror attacks, “not a single act of terrorist violence has been committed by a refugee who has undergone our screening procedures.”
What fact does the LA Times reporter note about Iraqi refugees in 2001?

FOR DISCUSSION: Despite the fact that 53% of Americans opposed his plan, President Obama greatly increased the number of Syrians being brought into the U.S. He said he wanted to address the humanitarian crisis in Syria.
During the presidential campaign, Donald Trump argued that terrorists might seek to hide among refugees and said accepting Syrian refugees is a national security risk.
Over 4 million Syrians have left their country since the civil war started in 2011. Most have gone to Lebanon, Jordan, Turkey, Germany.
The U.S. has taken less that one-half of one percent (<.5%) of the 4-5 million Syrian refugees who have left Syria. The Obama administration has insisted the refugee screening process is exhaustive and rigorous.
President Trump has been considering a temporary freeze on the Syrian refugee program.
What do you think? Should President Trump put a temporary hold on the program? Can the government properly vet people coming from Syria? Is bringing Syrian people here the best way to help them?
Explain your answer.