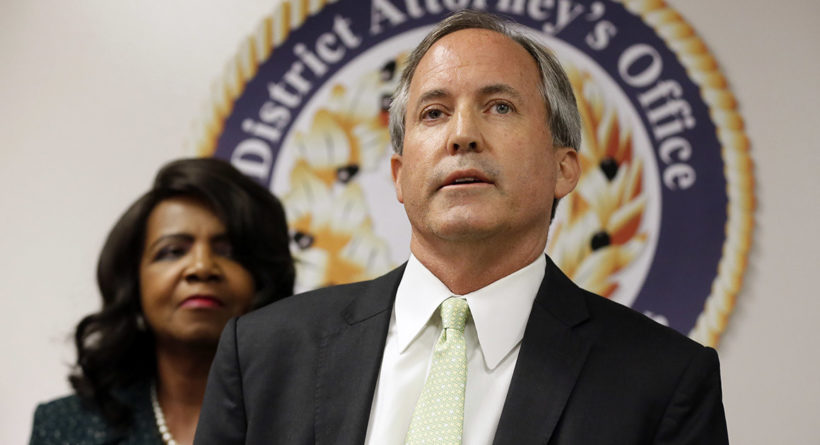 Texas Attorney General Ken Paxton said after decision that he was pleased that the ruling "will allow Texas to strengthen public safety." | Tony Gutierrez/AP Photo

(by Daniel Uria, UPI) — The U.S. 5th Circuit Court of Appeals ruled Tuesday that most of a Texas law banning so-called sanctuary cities can remain in effect.

The federal court upheld portions of Senate Bill 4 which allows local law enforcement officers to question the immigration status of people they detain or arrest and requires county jails to honor requests by U.S. Immigration and Customs Enforcement (ICE) to hold detainees suspected of being eligible for deportation.

“With one exception, SB4’s provisions do not, on their face, violate the Constitution,” the panel wrote.

The ruling overturns an injunction by a San Antonio federal judge who found portions of the law unconstitutional.

The judges didn’t uphold a provision punishing local officials from “adopting, enforcing or endorsing” policies that specifically prohibit or limit enforcement of immigration laws. They found the use of the word “endorse” could violate the First Amendment and penalize local officials who opposed immigration policies.

The American Civil Liberties Union of Texas, which filed a lawsuit against the state on behalf of several cities, including Houston, Dallas, Austin and San Antonio, said it would consider how to move forward.

“The court made clear that we remain free to challenge the manner in which the law is implemented, so we will be monitoring the situation on the ground closely,” said Lee Gelernt, deputy director of the ACLU’s Immigrants’ Rights Project.

“Texas Ban on Sanctuary City Policies upheld by Federal Court of Appeals. Allegations of discrimination were rejected. Law is in effect,” he wrote.

Attorney General Ken Paxton, who had defended the law in court, said he was pleased with the ruling.

“Enforcing immigration law prevents the release of individuals from custody who have been charged with serious crimes. Dangerous criminals shouldn’t be allowed back into our communities to possibly commit more crimes,” Paxton said.

State Sen. Jose Menendez dismissed the law as “unnecessary and politically motivated” claiming it was opposed by “virtually everyone in law enforcement.”

“It does nothing to make anyone safer and it will drive a wedge between law enforcement and certain people,” he said.

Judge Orlando L. Garcia of United States District Court for the Western District of Texas blocked several parts of the law in August, but left in place the portion allowing law enforcement to question a person’s immigration status.

A separate panel of judges ruled in September that law enforcement agencies must comply with federal detainers for undocumented immigrants.

Reprinted here for educational purposes only. May not be reproduced on other websites without permission from UPI. Visit the website at upi .com.

2. Why did the 5th Circuit Court uphold most of Texas Senate Bill 4?

3. What parts of SB4 did the court uphold?

4. For what reason did the judges not uphold the provision punishing local officials from “adopting, enforcing or endorsing” policies that specifically prohibit or limit enforcement of immigration laws?

5. How did Texas Attorney General Ken Paxton explain the importance of the law?

6. Why does Texas State Sen. Jose Menendez oppose the law?

7. The federal appeals court ruled that the law was constitutional except for one part of one provision. With whom do you agree about the law: AG Paxton or Sen. Menendez? Explain your answer.
Note to students: While you might not feel strongly about the sanctuary city issue, others around you might take a strong position on one side or the other. Learn to logically defend your position, and politely respect your neighbor’s point of view. And if your neighbor gets argumentative with you, remind each other that both sides need to be tolerant of the other’s point of view. Sometimes it’s better to agree to disagree and avoid that topic if too emotional.

What You Need to Know About Sanctuary Cities:

The term “sanctuary cities” generally refers to jurisdictions that refuse to cooperate with lawful Federal immigration enforcement efforts, often by rejecting immigration “detainer” requests from U.S. Immigration and Customs Enforcement (ICE). When local law enforcement arrests an illegal alien on criminal charges, ICE issues a detainer, which is a request that the local authority notify ICE before releasing the alien and maintain custody for a short time so that ICE may take custody for removal purposes. Sanctuary jurisdictions, including many big cities, refuse to comply with ICE’s detainer requests.

WHY: Sanctuary city policies cause dangerous criminal aliens to be released into our communities, putting innocent lives at risk.

Sanctuary cities are preventing Federal authorities from locating and arresting dangerous criminal aliens and removing them from our country. Sanctuary policies in California have allowed the release of numerous criminal aliens charged with serious crimes who could continue to harm communities. For example:

When sanctuary city officials refuse to honor ICE detainer requests, they are putting the public and law enforcement officers at risk. If ICE cannot arrest illegal or criminal aliens in the controlled environments of police stations or jails, it must perform its lawful immigration enforcement duties in workplaces, in residences, or in the streets. Even worse, when sanctuary city officials warn illegal aliens about possible upcoming immigration enforcement activities, they allow criminals to prepare themselves, endangering innocent bystanders and putting law enforcement at greater risk.
(from whitehouse.gov)

THE U.S. COURT SYSTEM:  There are two separate court systems in America: