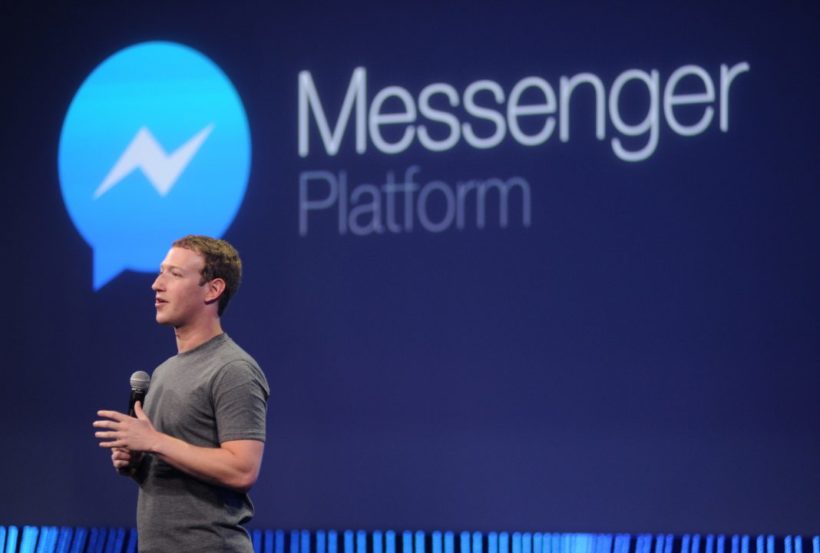 (by Josh Constine, TechCrunch) – You can’t remove Facebook messages from the inboxes of people you sent them to, but Facebook did that for Mark Zuckerberg and other executives.

Three sources confirm to TechCrunch that old Facebook messages they received from Zuckerberg have disappeared from their Facebook inboxes, while their own replies to him conspicuously remain.

An email receipt of a Facebook message from 2010 reviewed by TechCrunch proves Zuckerberg sent people messages that no longer appear in their Facebook chat logs or in the files available from Facebook’s Download Your Information tool.

When asked by TechCrunch about the situation, Facebook claimed in this statement it was done for corporate security. [They wrote]:

“After Sony Pictures’ emails were hacked in 2014 we made a number of changes to protect our executives’ communications. These included limiting the retention period for Mark’s messages in Messenger. We did so in full compliance with our legal obligations to preserve messages.”

However, Facebook never publicly disclosed the removal of messages from users’ inboxes, nor privately informed the recipients. That raises the question of whether this was a breach of user trust. When asked that question directly over Messenger, Zuckerberg declined to provide a statement.

A Facebook spokesperson confirmed to TechCrunch that users can only delete messages from their own inboxes, and that they would still show up in the recipient’s thread. There appears to be no “retention period” for normal users’ messages, as my inbox shows messages from as early as 2005. That indicates Zuckerberg and other executives received special treatment in being able to pull back [delete from recipients’ inboxes] previously sent messages.

Following this report: [Update 4/6/2018: Facebook now says that it plans to launch an “unsend” feature for Facebook messages to all users in the next several months, and won’t let Mark Zuckerberg use that feature any more until it launches for everyone.

One option Facebook is considering for the Unsend feature is an expiration timer users could set. But it’s alarming that Facebook didn’t disclose the retractions or plans for a Unsend button until forced, and scrambling to give everyone the feature seems like an effort to quiet users’ anger over the situation.].

Facebook chats sent by Zuckerberg from several years ago or older were missing from the inboxes of both former employees and non-employees. What’s left makes it look like the recipients were talking to themselves, as only their side of back-and-forth conversations with Zuckerberg still appear. Three sources asked to remain anonymous out of fear of angering Zuckerberg or burning bridges with the company.

[Update: Recent messages from Zuckerberg remain in users’ inboxes. Old messages from before 2014 still appear to some users, indicating the retraction did not apply to all chats the CEO sent. But more sources have come forward since publication, saying theirs disappeared, as well.].

None of Facebook’s terms of service appear to give it the right to remove content from users’ accounts unless it violates the company’s community standards. While it’s somewhat standard for corporations to have data retention policies that see them delete emails or other messages from their own accounts that were sent by employees, they typically can’t remove the messages from the accounts of recipients outside the company. It’s rare that these companies own the communication channel itself and therefore host both sides of messages as Facebook does in this case, which potentially warrants a different course of action with more transparency than quietly retracting the messages.

Facebook’s power to tamper with users’ private message threads could alarm some. The issue is amplified by the fact that Facebook Messenger now has 1.3 billion users, making it one of the most popular communication utilities in the world. …..

If you have more info on this situation, including evidence of messages from other Facebook executives disappearing, you may contact the Tech Crunch article’s author, Josh Constine, via open Twitter DMs, josh@techcrunch.com, or encrypted Signal chat at (585)750-5674.

1. Describe the questionable actions taken by Facebook that were recently revealed by anonymous sources to TechCrunch.

2. What proof does TechCrunch offer?

3. How did Facebook respond to questions about the allegations?

4. What didn’t Facebook do about the messages they deleted that raises the question of whether the deletions were a breach of user trust?

5. a) What did Facebook do following the revelations made in the TechCruch article?
b) What assertion does TechCrunch reporter Josh Constine make about Facebook’s “Unsend” feature?
c) Do you agree with Mr. Constine’s assertion? Explain your answer.

6. Re-read paragraph 12. What one or two words would you use to describe Facebook’s actions?

7. Read the “Background” below. After Mark Zuckerberg first launched Facebook he wrote to a friend:

“yea so if you ever need info about anyone at harvard…just ask…i have over 4000 emails, pictures, addresses, sns” Zuckerberg wrote to a friend.

Do you think the Mark Zuckerberg of today can be trusted with your personal information? Explain your answer.

More from the TechCrunch article above:
Mark Zuckerberg is known to have a team that helps him run his Facebook profile, with some special abilities for managing his 105 million followers and constant requests for his attention. For example, Zuckerberg’s profile doesn’t show a button to add him as a friend on desktop, and the button is grayed out and disabled on mobile. But the ability to change the messaging inboxes of other users is far more concerning.

Facebook may have sought to prevent leaks of sensitive corporate communications. Following the Sony hack, emails of Sony’s president Michael Lynton, who sat on Snap Inc.’s board, were exposed, revealing secret acquisitions and strategy.

However, Facebook also may have looked to thwart the publication of potentially embarrassing personal messages sent by Zuckerberg or other executives.

In 2010…Business Insider published now-infamous instant messages from a 19-year-old Zuckerberg to a friend shortly after starting Facebook in 2004. Zuckerberg wrote:

The New Yorker later confirmed the messages with Zuckerberg, who told the publication he “absolutely” regretted them.

“If you’re going to go on to build a service that is influential and that a lot of people rely on, then you need to be mature, right? I think I’ve grown and learned a lot,” said Zuckerberg.

If the goal of Facebook’s security team was to keep a hacker from accessing the accounts of executives and therefore all of their messages, they could have merely been deleted on their side the way any Facebook user is free to do, without them disappearing from the various recipients’ inboxes. If Facebook believed it needed to remove the messages entirely from its servers in case the company’s backend systems we breached, a disclosure of some kind seems reasonable. …