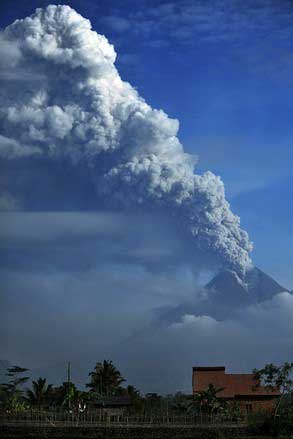 A mass burial late Sunday for many of the 141 people killed in the last two weeks served as a reminder of the mountain’s devastating power that culminated in its deadliest blast in 80 years, which sent hot clouds of gas, rocks and debris avalanching down its slopes.

“My parents have been calling…saying ‘You have to get out of there! You have to come home!'” said Linda Ervana, a 21-year-old history student who was waiting with friends at a train station in the university town of Yogyakarta, [20 miles] away [from the volcano].

After failing to get tickets, they rented a minibus with other classmates.

All were flying again Monday, and White House officials said Obama was still scheduled to touch down Tuesday.

Merapi, one of the world’s most active volcanoes, has erupted many times in the last century, killing more than 1,400. But Friday was the mountain’s deadliest day since 1930, with nearly 100 lives lost.

Islam mandates that the dead be buried quickly, so authorities gave relatives three days to identify their loved ones. To speed up the process, most families chose to have their relatives interred in a mass grave-a common practice in Indonesia following a disaster.

One by one the bodies-some too charred to be identified-were lowered into a massive trench in the shadow of the volcano.

Merapi was still issuing explosive roars Monday as it shot clouds of gas and debris [more than half a mile] in the air as superheated clouds of ash, gas and debris known as pyroclastic flows poured down its slopes.

“Based on what we’re seeing now, it could erupt again any time,” said Surono, a state volcanologist.

The National Disaster Management Agency said the overall death toll from the volcano climbed from 138 to 141 Monday after search and rescue teams found more bodies on the mountain. [The number of those killed rose to 153 as of November 9, 2010.]

The Indonesian government has put Yogyakarta on high alert.

The city’s airport was closed yet again Monday, and the ash hung so thickly in the air that breathing became painful and clothes stunk of smoke after any time spent outdoors.

Though there have been no orders to evacuate Yogyakarta, many residents have decided to go on their own. Small hamlets on the edge of the city looked like ghost towns, houses shuttered, some with laundry still hanging outside.

“What choice do we have?” asked Sukirno, 37, as he sped away with his wife and their 8-year-old daughter on a motorbike, saying they would join relatives far away over fears of the effect of the ash on their health.

The biggest threat to the city, experts say, is not searing gas clouds, but the Code River, which flows right into the city’s heart from the 3,000-meter mountain.

It could act as a conduit for deadly volcanic mudflows that form in heavy rains, racing at speeds of up to [60 MPH] and destroying everything in their path. A thick, black volcanic sludge has already inundated one city neighborhood that starts at the river bank and climbs a hillside.

In Romomangun, the mud burst the banks and poured into buildings.

It has filled a path that runs along the river-which is usually about a meter below a retaining wall but is now even with it. The sludge also rushed into a small, one-room building on the bank that houses a public bathroom. The top of the entry door is now at waist level.

Nearly 280,000 people-many of whom normally live on the fertile slopes of the volcano-have jammed into emergency shelters. Many have complained of poor sanitation, saying there were not enough toilets or clean drinking water.

Indonesia, a vast archipelago of 235 million people, is prone to earthquakes and volcanoes because it sits along the Pacific “Ring of Fire,” a horseshoe-shaped string of faults that lines the Pacific Ocean.

Copyright 2010 Dow Jones & Company, Inc. All Rights Reserved.  This is an Associated Press article.  Reprinted here for educational purposes only.  Visit the website at wsj.com.

NOTE: Many Indonesians use/have only one name.

3. a) How far away is the city of Yogyakarta from Mount Merapi?
b) How many people live in Yogyakarta?

4. Nearly 100 people were killed by Friday’s eruption of Mount Merapi. When was the last time the volcano caused such devastation?

5. What do officials say is the biggest threat to Yogyakarta from Mount Merapi?

Go to the U.S. State Department website at state.gov/r/pa/ei/bgn/2748.htm for background information on Indonesia.

Go to yahooimages for photos from Mount Merapi’s eruptions.