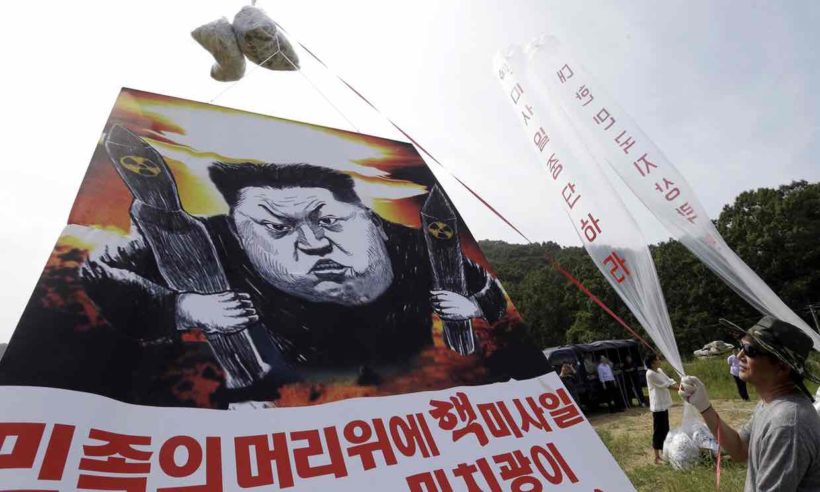 (by Patricia Zengerle, Reuters) | WASHINGTON – Top Trump administration officials will hold a rare briefing on Wednesday at the White House for the entire U.S. Senate on the situation in North Korea.

All 100 senators have been asked to the White House for the 3 p.m. briefing by Secretary of State Rex Tillerson, Secretary of Defense Jim Mattis, Director of National Intelligence Dan Coats and General Joseph Dunford, chairman of the Joint Chiefs of Staff, said White House spokesman Sean Spicer on Monday.

While administration officials routinely travel to Capitol Hill to address members of Congress on foreign policy matters, it is unusual for the entire Senate to go to the White House, and for all four of those top officials to be involved. Aides said they were working with the White House to schedule a similar briefing for the House of Representatives.

[The unusual briefing underlines the urgency with which the Trump administration is treating the threat posed by Pyongyang’s continuing development of nuclear weapons and missile technology. It follows a lunch meeting President Trump held with the UN Security Council ambassadors, including China and Russia, at the White House on Monday where he emphasised US resolve to stop North Korea’s progress.

“The status quo in North Korea is also unacceptable,” President Trump told the 15 U.N. Security Council ambassadors, including China and Russia, at the White House. “The council must be prepared to impose additional and stronger sanctions on North Korean nuclear and ballistic missile programs.”

“This is a real threat to the world, whether we want to talk about it or not. North Korea is a big world problem and it’s a problem that we have to finally solve,” he said. “People put blindfolds on for decades and now it’s time to solve the problem.”] President Trump and members of the UN National Security Council at the White House on April 24, 2017. [President Trump hosted a working lunch with the ambassadors from countries on the UN Security Council on Monday and said that they were going to be busy tackling problems that the UN typically avoids addressing. “North Korea is a big world problem,” he told the ambassadors. “People have put blinders on for decades.”]

Washington has expressed mounting concern over North Korea’s nuclear and missile tests, and its threats to attack the United States and its Asian allies.

Wednesday’s Senate briefing was originally scheduled for a secure room at the Capitol, but President Trump suggested a shift to the White House, congressional aides said.

Congressional aides suggested the briefing was being held at the White House to underscore the message to North Korea that Washington is serious about wanting a shift in policy (to get tough on North Korean aggression).

A senior Trump administration official said the flurry of activity around North Korea was “not a part of something choreographed” and cautioned against over-interpretation.

President Trump has vowed to prevent North Korea from being able to hit the United States with a nuclear missile and has said all options are on the table, including a military strike, although officials say tougher sanctions are the preferred route.

Also, on Friday Secretary of State Tillerson is due to chair a UN Security Council meeting on the issue in New York, at which the state department said he would call once more for the full implementation of existing UN sanctions or new measures in the event of further nuclear or missile tests.

China, North Korea’s sole major ally, has been angered by its nuclear and missile programs and its belligerence.

President Trump spoke by phone with Chinese President Xi Jinping on Monday. Media reports state that President Xi urged President Trump to show restraint toward North Korea despite signs that the North may be preparing a nuclear test. But that doesn’t seem to be entirely correct. Chinese media published a full text of the call, and North Korea observer Adam Cathcart noted:

“Reading the Xi-Trump conversation in the NK embassy in Beijing? Take note of Xi’s praise for mil-mil cooperation” (between US and Chinese military forces)

If you run the text through Google Translate you find Xi wants to “solve the nuclear issue on the Korean Peninsula as soon as possible and realize the denuclearization of the peninsula.”

U.S. ambassador to the United Nations Nikki Haley said Washington and the international community were maintaining pressure on North Korean leader Kim Jong Un but “not trying to pick a fight with him.”

Asked whether a pre-emptive strike was under consideration, Ambassador Haley said:

“We are not going to do anything unless he gives us reason to do something. If you see him attack a military base, if you see some sort of intercontinental ballistic missile, then obviously we’re going to do that. But right now, we’re saying ‘don’t test, don’t use nuclear missiles, don’t try and do any more actions’, and I think he’s understanding that. And China’s helping really put that pressure on him.”

In recent days Ms. Haley and other US officials have underlined China’s helpfulness in seeking to increase pressure on the North Korean leader, Kim Jong-un.

“Working with China for the first time — they have really been our partner in trying to make sure that we hold him at bay, and I think it’s a new day when you’ve got China and the United States working together on a statement to condemn North Korea,” Ambassador Haley said.

“They put pressure on him. He feels it. That’s why he’s responding this way. And I think it is a different day.”

“We agreed to strongly demand that North Korea, which is repeating its provocation, show restraint,” Mr. Abe told reporters. “We will maintain close contact with the United States, keep a high level of vigilance and respond firmly.”

Compiled/adapted from news reports at Reuters, Thomson Reuters Foundation and the UK Guardian. Reprinted here for educational purposes only. May not be reproduced on other websites without permission.

2. Name the officials who will brief the Senate on North Korea at the White House today.

4. What concern does the Trump administration, South Korea, Japan, China and the world in general have about North Korea?

5. On Monday, President Trump met with the 15 ambassadors who make up the U.N. Security Council. What did he say to the council?

6. China is North Korea’s major ally. President Trump while campaigning made several “undiplomatic” (pro-American) assertions about China.
a) What do you learn about U.S. / Chinese relations under Donald Trump?
b) Ask a parent: are you surprised by President Trump’s diplomacy in persuading China to take a vocal stand against its ally North Korea’s nuclear program? Please explain your answer.
c) Ask a parent: Are you heartened or dismayed by President Trump’s strategy for dealing with North Korea and his insistence that the UN Security Council take a stronger stand? Please explain your answer.

7. President Obama’s stated foreign policy was that of multilateralism (a kind of alliance where multiple countries work together). He was lauded by the media for taking this approach. Unfortunately, during his eight years in office, the U.N. had no success in causing North Korea to stop their nuclear weapons program and belligerence.
Critics of President Trump call him a nationalist and/or populist, and use the terms as a negative and even sinister label. Nationalism is defined as: a feeling that people have of being loyal to and proud of their country often with the belief that it is better and more important than other countries. It is true that President Trump does put America first.
What do you think of Mr. Trump’s ability to take the lead in the world, using a multilateral approach to addressing the threat the madman Kim Jong Un poses to the U.S. and our Asian allies?

According to WorldAtlas .com, there are 194 independent countries in the world today.
192 countries are UN members. The exceptions are Taiwan (in 1971, the UN ousted Taiwan and replaced it with the People’s Republic of China) and Vatican City. Kosovo is not yet a member (it is not recognized as an independent country by all).
Each country gets one vote in the UN General Assembly.
Although there are 192 UN member countries, the U.S. pays at least 22% of the overall yearly budget of the UN.