(by Jennifer Loven, AP White House Correspondent, YahooNews.com) WASHINGTON – Declaring “I don’t quit,” President Barack Obama fought to recharge his embattled presidency with a State of the Union vow to get jobless millions back to work and stand on the side of Americans angry at Wall Street greed and Washington bickering. Defiant despite stinging setbacks, he said he would fight on for ambitious overhauls of health care, energy and education. 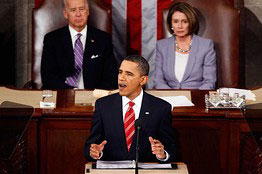 “Change has not come fast enough,” Obama acknowledged Wednesday night before a politician-packed House chamber and a TV audience of millions. “As hard as it may be, as uncomfortable and contentious as the debates may be, it’s time to get serious about fixing the problems that are hampering our growth.”

Obama looked to change the conversation from how his presidency is stalling – over the messy health care debate, a limping economy and the missteps that led to Christmas Day’s barely averted terrorist disaster – to how he is seizing the reins. He spoke to a nation gloomy over double-digit unemployment and federal deficits soaring to a record $1.4 trillion, and to fellow Democrats dispirited about the fallen standing of a president they hoped would carry them through this fall’s midterm elections.

With State of the Union messages traditionally delivered at the end of January, Obama had one of the presidency’s biggest platforms just a week after Republicans scored an upset takeover of a Senate seat in Massachusetts, prompting hand-wringing over his leadership. With the turnover erasing Democrats’ Senate supermajority needed to pass most legislation, it also put a cloud over health care and the rest of Obama’s agenda.

Obama implored lawmakers to press forward with his prized health care overhaul, in severe danger in Congress. “Do not walk away from reform,” he said. “Not now. Not when we are so close.”

Republicans applauded the president when he entered the chamber and craned to welcomed Michelle Obama. But bipartisanship disappeared early, with Republicans sitting stone-faced through several rounds of emphatic Democratic cheering and as Obama took a sharp jab at GOP congressional strategy. “Just saying no to everything may be good short-term politics, but it’s not leadership,” he said. …

The president devoted about two-thirds of his speech to the economic worries foremost on Americans’ minds as recession persists. “The devastation remains,” he said. …

Declaring that “I know the anxieties” of Americans’ struggling to pay the bills while big banks get bailouts and bonuses, Obama prodded Congress to enact a second stimulus package “without delay,” urging that it contain help for small businesses and funding for infrastructure projects. Also, fine tuning a plan first announced in October, Obama said he will initiate a $30 billion program to provide money to community banks at low rates, if they boost lending to small businesses. The money would come from balances left in the $700 billion Wall Street rescue fund – a program “about as popular as a root canal” that Obama made of point of saying “I hated.”

Acknowledging frustration at the government’s habit of spending more than it has, he said he would veto any bills that do not adhere to his demand for a three-year freeze on some domestic spending. He announced a new, though nonbinding bipartisan deficit-reduction task force (while supporting the debt-financed jobs bill). He said he would cut $20 billion in inefficient programs in next year’s budget and pore over it “line by line” to find more.

Positioning himself as a fighter for the regular guy, he urged Congress to require lobbyists to disclose all contacts with lawmakers or members of his administration and to blunt the impact of last week’s Supreme Court decision allowing corporations greater flexibility in supporting or opposing candidates. “We face a deficit of trust,” the president said.

Even before Obama spoke, some of the new proposals, many revealed by the White House in advance, were dismissed – on the right or the left – as poorly targeted or too modest to make a difference. And one of Obama’s economic point men, Treasury Secretary Timothy Geithner, was verbally pummeled by Democrats and Republicans alike over his role in the $180 billion bailout of insurance giant AIG Inc., a venting of the public’s anger about Wall Street.

In the Republican response to Obama’s speech, Gov. Bob McDonnell of Virginia showed no sign of his party capitulating to the president.

In fact, the choice of McDonnell to represent Republicans was a symbolic showcase of recent GOP election victories by him and others. McDonnell reflected the anti-big government sentiment that helped lead to their wins, saying, “today, the federal government is simply trying to do too much.”

In his speech, Obama hoped to rekindle the energy of his historic election. But he surely taxed viewers’ patience with an address that ran to an hour and nine minutes with applause – longer than any State of the Union since the Clinton era despite aides labors to whittle it down.

Obama took blame for not adequately explaining his plans to the public and connecting with their everyday worries.

“I campaigned on the promise of change, ‘change we can believe in,’ the slogan went,” he said. “And right now, I know there are many Americans who aren’t sure if they still believe we can change, or at least that I can deliver it.”

At the same time, he offered an unapologetic defense of pursuing the same agenda on which he won.

He said that includes the health care overhaul, as well as an aggressive approach to global warming (though without a plug for the controversial cap-and-trade system for emissions that he favors), sweeping changes to address the nation’s millions of illegal immigrants, “serious” reform of how Wall Street is regulated and children are educated.

Obama called on lawmakers to resist the temptation to substitute a smaller-bore health care solution for his far-reaching ideas, but he didn’t say how. He simply said, “As temperatures cool, I want everyone to take another look at the plan we’ve proposed.”

Hoping to [appease] growing disappointment in a key constituency, Obama said he would work with Congress “this year” to repeal the ban on gays and lesbians serving openly in the military, without a commitment to suspend the practice in the interim.

In a remarkable shift from past addresses, and notable for a president whose candidacy first caught fire over Iraq war opposition, foreign policy took a relative back seat. Obama made no mention of three of the toughest challenges he faced in his first year: failing to close the terrorist prison compound at Guantanamo Bay, Cuba, failing to get Israel and the Palestinians to resume peace negotiations, and struggling with the al-Qaida havens in Pakistan that are at the core of the terrorist threat to America.

He proclaimed some success, saying that “far more” al-Qaida terrorists were killed under his watch last year in the U.S.-led global fight than in 2008.

The president is keeping to the tradition of taking his themes on the road. He will travel to Florida on Thursday to announce $8 billion in grants for high-speed rail development, to Maryland on Friday to a House Republican retreat, and to New Hampshire Tuesday to talks jobs. Cabinet officials were fanning out too.

Copyright ©2010 The Associated Press. All rights reserved. Reprinted here for educational purposes only. The information contained in this AP News report may not be published, broadcast, rewritten, or redistributed without the prior written authority of The Associated Press. Visit news.yahoo.com for the origianl post.

1. What was the main focus of President Obama’s State of the Union Address?

2. Which issues did the President bypass altogether, or just mention briefly?

3. The reporter inserts her opinion to assert in para. 14 that the President taxed Americans’ patience by giving an address that lasted over an hour – longer than any State of the Union since the Clinton presidency. Do you think this is an accurate observation? Explain your answer.

4. Which issues (upon which he campaigned and won the presidency) did President Obama last night say he would continue to work toward achieving?

5. What military issue did the President assure his supporters he would work on achieving this year with Congress?

6. In his address, President Obama pushed Congress to enact a second stimulus package. How did he say this and other spending would help small businesses?

7. In his address, the President acknowledged frustration at the government’s habit of spending more than it has and also said that he would demand a three-year freeze on some domestic spending. During his presidential campaign, Mr. Obama promised the American people a “net spending cut.” However, he signed a stimulus bill that spends $800 billion, and he has proposed a budget that would increase spending by $1 trillion over the next decade and asked for additional billions for a second stimulus bill.
a) Do you think that President Obama’s policies are helping or harming the economy? Explain your answer.
b) Ask a parent the same question.

8. If you haven’t done so already, watch/read the President’s State of the Union Address at WhiteHouse.gov.
a) Do you think the President is focusing on the correct issues? Explain your answer.
b) Ask a parent the same question.

CHALLENGE QUESTION: Watch/read the Republican response to the President’s State of the Union at c-span.org/Watch/watch.aspx?MediaId=HP-A-28954. What do you think of Gov. McDonnell’s response?

Conservatives generally oppose the President’s policies. For a conservative perspective of President Obama’s speech, go to the conservative website The American Thinker.

For texts and/or videos of Presidential State of the Union Addresses since 1945, go to c-span.org/Executive/State-of-the-Union.aspx.

The Associated Press conducted a Fact Check of some of President Obama’s “claims and how they compare with the facts.”  Read the AP’s analysis at news.yahoo.com/s/ap/20100128/ap_on_go_pr_wh/us_obama_fact_check.