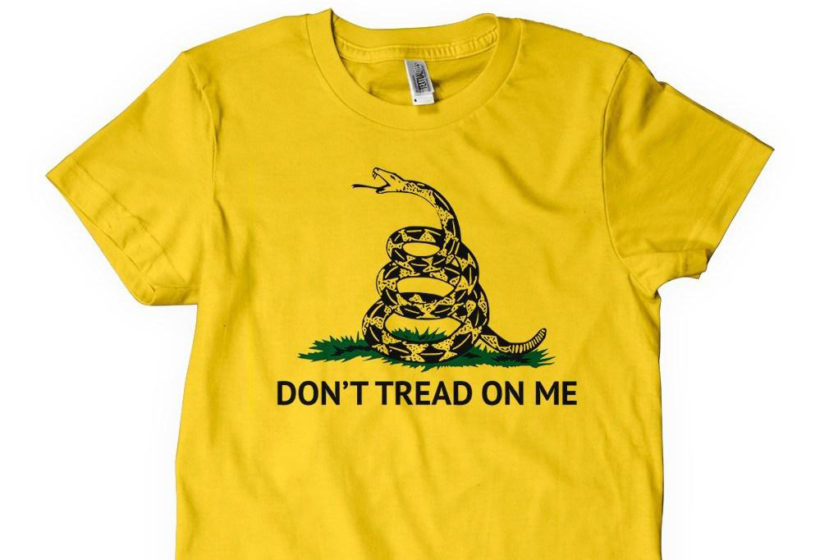 (by Pete Williams, NBC News) WASHINGTON — People headed to the polls on Election Day in Minnesota have two things to think about — how to vote and what to wear.

On Wednesday, the U.S. Supreme Court heard a challenge to the state’s ban on wearing T-shirts, hats, and any other clothing containing political messages to polling places.

The state says the law preserves a safe voting environment, free from intimidation. Opponents say the restriction is so vague it violates the Constitution’s guarantee of free speech.

While all states outlaw electioneering at the polls, Minnesota and a handful of others go further, prohibiting clothes or buttons that mention not only a candidate, a political party or a ballot issue, but also any group with recognizable political views, such as the Tea Party or MoveOn.

When Andrew Cilek showed up to vote in 2010 wearing a “Don’t Tread on Me” t-shirt [with a small Tea Party logo]  and a button that said “Please I.D. Me,” he was told to cover them up or take them off before he could cast a ballot. He was finally allowed to vote after a poll worker took down his name and address for possible prosecution.

When he and other Minnesotans sued, lower courts upheld the law as a reasonable way to preserve decorum at the polls.

In appealing to the Supreme Court, the challengers say the law goes too far, restricting “The most peaceful method of political expression – the silent wearing of clothing,” including T-shirts that merely name a political group or ideology and make no attempt to persuade voters.

The ACLU agreed, arguing that the electorate “is surely hardy enough to vote their conscience,” even if they see a Black Lives Matter shirt or a Women’s March hat [or a “Don’t tread on me” t-shirt].

Minnesota urges the court to uphold the restrictions as necessary to preserve order and decorum at the polls and prevent voter confusion and intimidation.

“The right to vote and the integrity of our elections must be jealously protected, said Daniel Rogan of the county attorney’s office in Hennepin County, Minnesota.

A key legal question is what kind of First Amendment protections apply at the polls. Minnesota says they are government-controlled properties, allowing states to impose more restrictions on expression that would be allowed in, for example, a public park.

The National Association of Counties and other local government groups, in a friend-of-court brief, say delays and fights on Election Day remain common. “For all the progress the United States has made in the past century, polling place problems are still widespread,” the brief says.

The court will issue a decision in the case by the end of June.

Reprinted here for educational purposes only. May not be reproduced on other websites without permission from NBC. Visit the website at nbc .com.

1. What is at issue in the case Minnesota Voters Alliance v. Joe Mansky?

2. How did the state defend the law in its arguments to the Supreme Court on Wednesday?

4. What happened to Andrew Cilek in 2010 that caused him to sue the state?

5. Why did the lower courts uphold the law (side with the state)?

6. Among the defendants in the case is Hennepin County Attorney Mike Freeman, who said he believes Cilek is overreacting. He said, “My sense of the First Amendment is not offended by saying, ‘Tea Party folks, don’t wear your “I.D. me please” buttons into the polling place.’ I’d like to be left alone when I go to vote.” Do you agree with Mr. Freeman, who thinks that if people disagree with your opinion, they have a legal right to not be annoyed by you?

7. Do you think the court should rule in favor of Mr. Cilek, or the state of Minnesota? Explain your answer.

8. Why do you think it would be a different issue if a poll worker wore anything that identified his/her politics?

Read the oral arguments in Minnesota Voters Alliance v. Joe Mansky, which was heard on February 28. (NOTE: The transcripts of oral arguments are posted on this website on the same day an argument is heard by the Court. Same-day transcripts are considered official but subject to final review. The audio recordings of all oral arguments heard by the Supreme Court are available to the public at the end of each argument week. The audio recordings are posted on Fridays after Conference.)

Minnesota election law forbids voters from wearing political badges, political buttons, or other political insignia at the polling place. See Minn. Stat. § 211B.ll. The ban broadly prohibits any material “designed to influence and impact voting,” or “promoting a group with recognizable political views,” even when the apparel makes no reference to any issue or candidate on the ballot.

The Eighth Circuit, aligned with the Fifth and D.C. Circuits, invoked Burson v. Freeman, 504 U.S. 191 (1992), to hold that a state can impose a “speechfree zone” without infringing on the Free Speech Clause of the First Amendment. There is deep tension between those decisions and the reasoning in decisions of the Fourth and Seventh Circuits, which hold that the First Amendment does not allow a state to prohibit all political speech.

The question presented is: Is Minnesota Statute Section 211B.ll, which broadly bans all political apparel at the polling place, facially overbroad under the First Amendment?