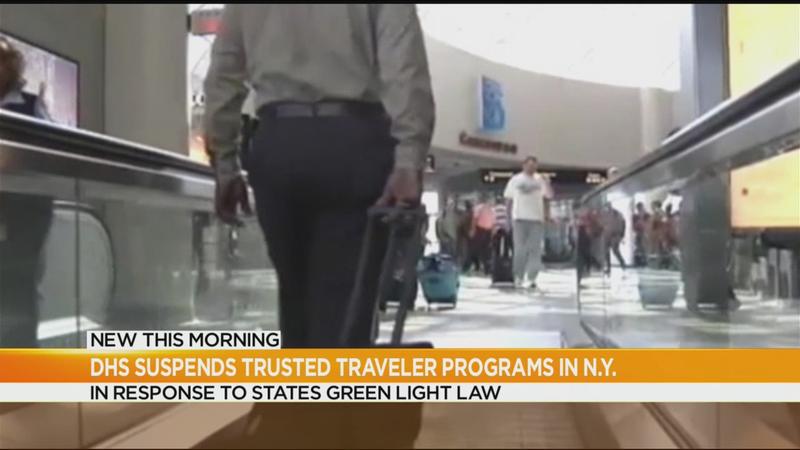 (by Elizabeth Rosner, New York Post and Michelle Hackman, WSJ) — The Department of Homeland Security announced the suspension of renewals and enrollments for Global Entry and other Trusted Travel Programs for New York residents.

“Today, we sent a letter to New York indicating, because they took these measures, that New York residents are no longer eligible to enroll in these Trusted Traveler Programs,” Wolf said.

Other programs suspended by DHS include NEXUS, SENTRI and FAST. They have millions of members and allow them to bypass long Customs and Border Protection lines.

The change will also prohibit vehicle exports. The letter does not refer to TSA’s PreCheck program.

“Although DHS would prefer to continue our long-standing cooperative relationship with New York on a variety of these critical homeland security initiatives, this Act and the corresponding lack of security cooperation from the New York DMV requires DHS to take immediate action to ensure DHS’s efforts to protect the Homeland are not compromised,” Wolf wrote in a letter sent to New York state officials.

According to Wolf, the Green Light Law prohibits the state DMV from sharing criminal records with Customs and Border Protection and with Immigration and Customs Enforcement.

Wolf said the change would go into immediate effect.

The change comes a day after President Trump’s State of the Union address, in which he attacked “sanctuary cities,” including New York City, for protecting illegal immigrants [as the law interferes with the prosecution and/or deportation of criminal illegal aliens].

2. What are the Global Entry and Trusted Traveler programs (TTP)?

3. a) What does New York’s recently passed Green Light Law allow illegal aliens in New York to do?
b) What does the law block ICE and CBP from doing?

4. How does Secretary Wolf explain DHS’s decision to drop New Yorkers from TTP?

5. At the end of December, Secretary Wolf sent a memo to all the components of Homeland Security, which include U.S. Customs and Border Protection, the Coast Guard and the Transportation Security Administration, requesting a department-wide study on how state laws granting driver’s licenses to illegal immigrants affect its enforcement efforts. Wolf’s directive asked that each agency survey what DMV information is already available, how it is used in day-to-day operations, and what are the security consequences without the data.

DHS spokeswoman Heather Swift explained, “The Trump administration takes the mission of protecting the Homeland very seriously,” adding that the laws were short-sighted and unsafe and skirt immigration laws on the books for decades. “These types of laws make it easier for terrorists and criminals to obtain fraudulent documents,” she said.

New York Governor Andrew Cuomo has accused President Trump of ordering the DHS move as “political retaliation” following his State of the Union address this week in which he mentioned “sanctuary cities.”

What do you think? Is DHS’s announcement “political retaliation” or an attempt to enforce laws and keep the public safe? Explain your answer.

6. Read the “Background” and watch the videos under “Resources.” What do you think:
a) Is the Department of Homeland Security being unfair and unreasonable to New York? Explain your answer.
b) Should any /all states be able to pass laws which prevent ICE and CBP from obtaining state driver’s license records that are used in criminal investigations? Explain your answer.

In a letter Acting Homeland Security Secretary Chad Wolf sent to New York DMV, he noted that the New York law prohibited DMV agencies across the state from sharing criminal records with Customs and Border Protection (CBP) and Immigration and Customs Enforcement (ICE).

“This Act and the corresponding lack of security cooperation from the New York DMV requires DHS to take immediate action to ensure DHS’ s efforts to protect the Homeland are not compromised,” he said. (Read the letter at scribd.com.)

Acting Homeland Security Secretary Chad Wolf said the limited access to driver’s license records, in particular, has hamstrung the work of ICE and CBP officers who rely on the data for photo identification, license-plate searches and other biographical information.

“They are using personal data that they get from that database to look up an individual’s date of birth, their photo, and they are using that as they build that case,” Secretary Wolf said on Fox News. “They can no longer do that because of what New York did.”

That data, he said, helps CBP verify the identities of people applying for Global Entry and the agency’s other programs that allow travelers to enter the U.S. or move through security more quickly.

“We no longer have access to make sure that they meet those program requirements,” he said.

Under the new policy, New York residents will no longer be able to apply for or renew their enrollment in Global Entry, along with NEXUS and SENTRI, programs that enable drivers to cross the Mexico and Canada borders more quickly. Enrollment in TSA PreCheck won’t be affected by the new policy.

Trusted Traveler Programs: These DHS programs allow members to use expedited lanes at the U.S. airports, and when crossing international borders. Read more at ttp.cbp.dhs.gov.