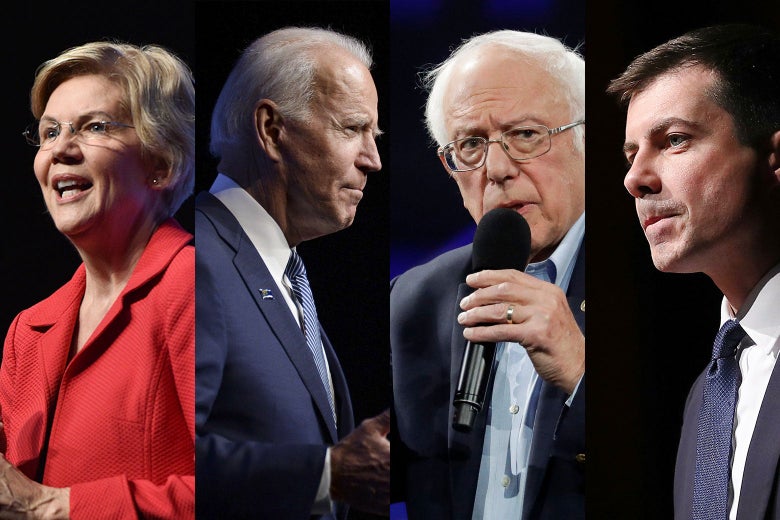 (by Vincent Barone, New York Post) — A glitch affecting a single computer monitor is responsible for the sudden canceling  of the CNN/Des Moines Register poll  — the pivotal ranking of Iowa’s Democratic presidential candidates that had been set to drop Saturday night just two days before the state’s caucuses.

The highly anticipated ranking, set to be released at 9 p.m., was spiked at the last minute after the error was discovered by the campaign of candidate Pete Buttigieg, according to a source familiar with how the poll was conducted and produced.

Pollsters found that the computer monitor — one of the “many dozens” used for live telephone surveys — was set with a font size that was too large, the source said.

The erroneous setting meant only 11 of the then-12 candidates’ names fit onto the screen, which was accessed by telephone surveyors asking Iowa Democrats about their preferred next president.

At least one of the poll surveyors happened to dial a Buttigieg supporter — and, due to the glitch, inadvertently failed to mention the candidate’s name when reading off the list.

The supporter raised a red flag to the Buttigieg campaign, which called the pollsters, leading to the discovery that spiked the poll.

“While this appears to be isolated to one surveyor, we cannot confirm that with certainty. Therefore, the partners made the difficult decision to not to move forward with releasing the Iowa Poll,” wrote the Des Moines Register.

The pollsters didn’t learn of the issue until Saturday, the source told The Post.

The computer monitors randomly generate names for each call a surveyor makes, meaning the setting could have chopped off different candidates’ names for different calls, the source said.

But pollsters by Saturday were only alerted to the one call placed out to the Buttigieg supporter.

“A respondent raised an issue with the way their interview was conducted, which could have compromised the results of the poll,” CNN said in a statement.

The paper has published the poll — conducted by polling firm Selzer & Co — for 76 years.

The backpedaling caused CNN to drop an hour-long special on the results.

“We were unable to ascertain what happened during this respondent’s interview, and cannot determine if this was a single isolated incident,” CNN said in a tweeted statement.

Recent polls have shown a tight race with Bernie Sanders gaining steam in a neck-and-neck race against Joe Biden.

Published at NYPost .com on Feb. 1, 2020. Reprinted here for educational purposes only. May not be reproduced on other websites without permission from the New York Post.

2. For what reason were the poll results scrapped just before they were supposed to be released? Be specific. (NOTE: CNN was going to run an hour-long show Saturday night to spend on the results.)

3. How was the glitch discovered?

4. Is the list of candidates’ names in the same order every time? Explain your answer.

5. Read the “Background” below the questions. Which candidate was expected to have won the poll?

Democratic donors and party insiders are warning that large swaths of their voters could stay home — or even defect to Trump — if Vermont Sen. Bernie Sanders snags the nomination. … Among insiders there is near-universal belief that Sanders’ card carrying socialist credentials could create enormous problems with suburban and older [Democratic] voters.

The Post also reported: News emerged Friday (Jan. 31) of DNC members privately discussing rules to prevent a Sanders nomination at the Democratic convention, according to Politico. From the Politico report: “A small group of Democratic National Committee members has privately begun gauging support for a plan to potentially weaken Bernie Sanders’ presidential campaign and head off a brokered convention.”

There is a possibility that Bernie Sanders won the scrapped CNN poll. Some supporters think an attempt will be made to bump their candidate out of winning the Democratic nomination. What do you think? Is this a possibility? Ask a parent the same question.

From a report by Steven Shepard at Politico, Saturday morning (Feb. 1) prior to the poll’s cancellation:

The most important, most anticipated public opinion poll in politics will be out on Saturday night.

But taking for granted the breathless media coverage that will accompany — CNN has scheduled an entire hour of programming to its release — the polling industry is urging everyone to take a deep breath.

The Des Moines Register/CNN/Medicom survey of likely Iowa Democratic caucus-goers doesn’t only capture the state of play in the all-important first voting state. It has the power to fuel a candidate’s 11th-hour momentum — or damage a contender who under-performs expectations.

Going into Saturday’s release, polls generally show a close race among the top four candidates, with either Joe Biden or Bernie Sanders leading the reliable public surveys. But Pete Buttigieg and Elizabeth Warren are still well within striking distance — though they are hovering around the 15 percent viability threshold in individual precinct caucuses.

From a follow-up report by Steven Shepard at Politico on the evening of Feb. 1 (updated 7:53 AM EST on Feb. 2):

The decision is a black mark for the poll, which has correctly predicted the winner of the Democratic caucuses dating back to 1988. With a crowded field of candidates at the top of the race, the results were expected to shed light on any late movement since the last survey, which was conducted in early January.

That survey showed Sen. Bernie Sanders of Vermont slightly ahead of a crowded pack of candidates at the top of the field. In the poll, Sanders (20 percent) led Sen. Elizabeth Warren of Massachusetts (17 percent), Buttigieg (16 percent) and former Vice President Joe Biden (15 percent).

J. Ann Selzer, the pollster, declined to comment on Saturday night’s decision to scrap the poll.

In a phone interview with POLITICO last week — before the since-spiked poll was conducted — Selzer discussed how she ensures the quality of her surveys at a time when it’s harder to get voters on the telephone to participate in polls.

Listing the efforts she and her company make, Selzer said: “We just work with as high a quality a phone bank as we can.”

According to two sources familiar with the poll, one interviewer at the call center used for the survey enlarged the font size on their monitor, potentially cutting off some names on the randomized list of candidates — including Buttigieg’s in the interview in question.

The media outlets couldn’t determine how many interviews may have been affected and whether other candidates may have been left off lists read to respondents in the course of conducting the poll.

The final poll from the Des Moines Register has been a critical, 11th-hour marker ahead of past caucuses. It has measured — and, in some cases, fed — a candidate’s late momentum, whether positive or negative.

Have you seen these StudentNewsDaily resources?