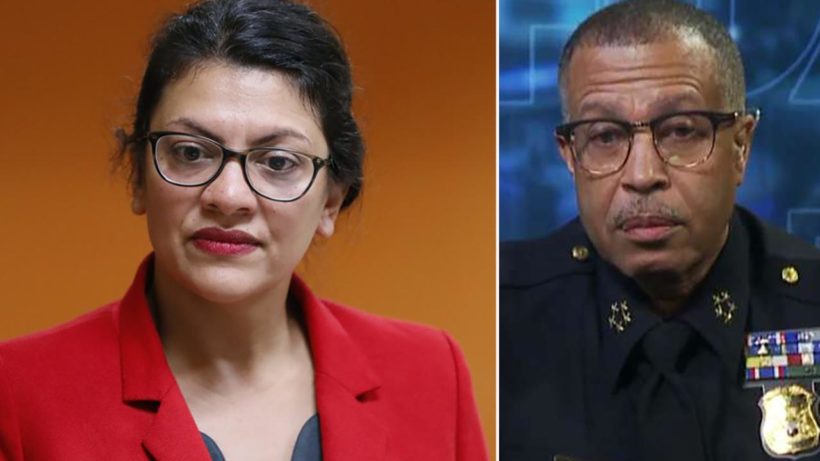 The Detroit Democrat made the statement during a tour of the Real Time Crime center, where monitors display live footage from video cameras on traffic lights and in and around businesses. …

Police officials invited Tlaib to the facility inside Public Safety Headquarters to see how Detroit uses facial recognition software, after she criticized the technology in an Aug. 20 tweet. The congresswoman wrote: “@detroitpolice You should probably rethink this whole facial recognition bull—-.”

The tour, which lasted more than an hour, was often tense, with Tlaib and Craig wrangling over how the department uses the software, privacy issues, and concerns that the technology misidentifies a disproportionate number of darker-skinned people. A major point of contention: whether only black civilians should work in the crime center analyzing photos flagged by the software.

“I know,” Tlaib answered. “But it does make a huge difference with the analysts.”

After the tour, when a reporter asked whether she meant white people weren’t qualified to work in the crime center, Tlaib said: “No, I think there has actually been studies out that it’s hard for — African Americans would identify African Americans, or Latinos, same thing.”

Tlaib then was asked whether that means non-whites should be barred from working as crime analysts in mostly white communities. She replied: “Look it up.”

…Craig said several members of his staff, black and white, told him after Monday’s meeting they were outraged by Tlaib’s remarks.

“It’s insulting,” Craig said. “We have a diverse group of crime analysts, and what she said — that non-whites should not work in that capacity because they think all black people look alike — is a slap in the face to all the men and women in the crime center.”

“That’s something we train for, and it’s valuable training, but to say people should be barred from working somewhere because of their skin color? That’s racist.”

From detroitnews .com. Reprinted here for educational purposes only. May not be reproduced on other websites without permission from The Detroit News.

3. How did the Chief respond to Rep. Tlaib’s accusation? Be specific.

4. a) How did Rep. Tlaib respond to a reporter who asked if she meant white people were not qualified to work in the crime center?
b) When she was then asked whether that means non-whites should be barred from working as crime analysts in mostly white communities, what was her response?
c) What do you think of her responses in a) and b)?

5. Watch the video under “Resources” below. Crime analysts working in the Crime center undergo rigorous training. Chief Craig told CNN affiliate WDIV-TV on Wednesday: “The fact that she made that statement, what does that say to the members of this department, who are analysts, who are trained, who are white? That they, in some way, can’t do their job professionally? That’s insulting.” What do you think of the Chief’s reaction to Rep. Tlaib’s accusations?

“The software doesn’t work on gender or race; it works on facial measurements,” Shaw said. “If you have a good photo, the photo array will come back with people with the same facial makeup, whether they’re male, female, black, white or whatever. It’s all about things like the spacing between the eyes, or where the ears are on the side of your head.

“That’s where the human element comes in,” said Shaw, whose agency has used facial recognition technology for more than 17 years. “If you know you’re looking for a white male, and the system kicks out a white female, or a black male, or whatever, then a technician will flag that. Nobody uses the software on its own.”

“There’s implicit bias in everything we do,” he said. “You just heard it in (Tlaib’s) comments.” (from The Detroit News article above)