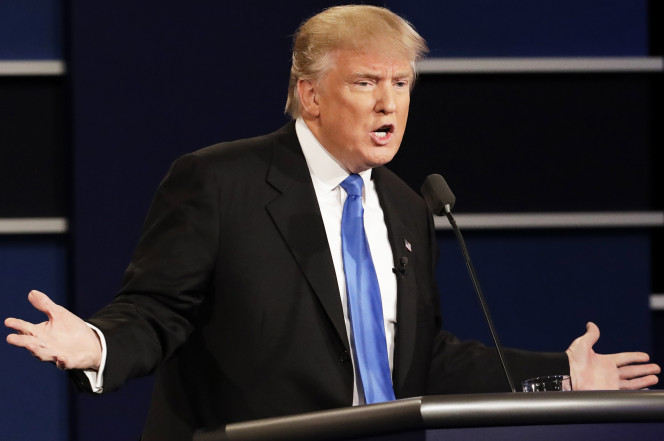 (from Los Angeles Times and New York Times) — Almost immediately after Monday’s presidential debate, Donald Trump complained he was saddled with a “defective mic.” Now, the Commission on Presidential Debates is acknowledging some technical difficulties with Trump’s audio.

The Commission put out a statement Friday that read, in its entirety: “Regarding the first debate, there were issues regarding Donald Trump’s audio that affected the sound level in the debate hall.”

The statement likely will raise more questions than settle them. There’s no detail on what was the audio issue and what exactly was the impact for the live audience. It also makes no mention of the effect, if any, on sound levels for television viewers. Around 84 million people tuned in to watch Monday’s faceoff, a record for a presidential debate.

The Commission did not immediately respond to a request for further comment.

The Commission, a nonprofit organization that sponsors the presidential debates, released no other information about the malfunction, including how it was discovered, which equipment was to blame, or why the problem was admitted to only on Friday, four days after the debate.

Reached by phone, a member of the commission’s media staff said she was not authorized to speak about the matter.

Some members of the audience, held at Hofstra University in New York, said in interviews that the amplification of Mr. Trump’s voice was at times significantly lower than that for Mrs. Clinton. And at times Mr. Trump appeared to be hunching down to get his face closer to his microphone.

Zeke Miller, a reporter for Time Magazine who attended the debate, mentioned the difference on Monday in a report to the traveling press pool for Mr. Trump. From his vantage point [in the debate hall], Mr. Miller wrote, Mr. Trump was sometimes “a little quieter” than Mrs. Clinton.

In an interview, Mr. Trump said he had tested out the audio system two hours before the event and found it “flawless.” Only during the debate did he notice the problem, Mr. Trump said, and he tried to compensate by leaning down more closely to the microphone. He complained that the changing volume had distracted him and alleged again that someone had created the problem deliberately.

“They had somebody modulating the microphone, so when I was speaking, the mike would go up and down,” Mr. Trump said. “I spent 50 percent of my thought process working the mike.” He had wanted to pause the debate to address the problem, Mr. Trump said, but felt he could not. “How can I stop the show if I had 100 million people watching?” he said.

Compiled from reports at the Los Angeles Times and the New York Times.

3. What details about Trump’s audio malfunction did the Commission not provide, according to the NY Times and LA Times reporters?

4. a) When asked for clarification by reporters, how did the Commission respond?
b) Why do you think it took four days for the Commission to acknowledge there was a technical problem with Mr. Trump’s audio?
c) The Commission has not provided details to explain the statement they released and has not yet answered reporters questions. Regardless of your like or dislike for Donald Trump, how important do you think this is to a transparent and fair election process? Explain your answer.

Mr. Trump was widely mocked in the media and by late-night talk show comedians for repeatedly making a “sniffling” noise during the debate, of a “having a bad case of the sniffles.” When interviewed the day after the debate, Mr. Trump said, ”No, no sniffles. You know, the mic was very bad, but maybe it was good enough to hear breathing. But no sniffles. No cold.”

Watch the video under “Resources” below. How does it sound to you? Do you think the mic picked up the sound of Trump’s breathing more than is typical or did he have the “sniffles” as the media have asserted? Explain your answer.

6. Mic .com is a media company that targets millennials. The company says the website has a higher composition of 18- to 34-year-old readers than any other millennial-focused news site, including BuzzFeed and Vice.

“So was it a ‘very bad’ mic? We asked an expert who said: ‘The professional audio community has largely been dismissive of the possibility of a mic problem. …There’s no evidence of technical problems with the microphones.’

a) The Commission on Presidential Debates has admitted that there were audio issues. What do you think: was the audio issue a deliberate malfunction to negatively affect Donald Trump in favor of Mrs. Clinton, or just a unfortunate coincidence? Explain your answer.

b) Did hearing Mr. Trump’s breathing as he was responding to questions negatively affect your view of Trump? Explain your answer.

c) Ask a parent to answer questions 5 and 6. Discuss your answers.

Watch a short clip from the debate: