Day of the Grasshopper Looms

(by Stephanie Simon, The Wall Street Journal, WSJ.com) DENVER – Farmers and ranchers across the West are bracing for a grasshopper infestation that could devastate millions of acres of crops and land used for grazing. 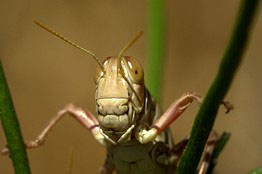 Over the coming weeks, federal officials say, grasshoppers will likely hatch in bigger numbers than any year since 1985. Hungry swarms caused hundreds of millions of dollars in damage that year when they devoured corn, barley, alfalfa, beets-even fence posts and the paint off the sides of barns.

A federal survey of 17 states taken last fall found critically high numbers of adult grasshoppers in parts of Idaho, Montana, Nebraska, South Dakota and Wyoming. Each mature female lays hundreds of eggs. So “the population could be very, very high this year,” said Charles Brown, who manages grasshopper suppression for the U.S. Department of Agriculture.

Ryan Fieldgrove is dreading the influx.

A rancher near Buffalo, Wyo., Mr. Fieldgrove was enjoying a banner year last summer when, seemingly out of nowhere, crawling carpets of hoppers marched onto his rangeland-a harbinger of this year’s infestation. In three weeks, they had eaten every blade of tender, nutritious grass on his 10,000 acres. They also ate his wife’s lilac bushes. “They took it all,” Mr. Fieldgrove said.

Unable to find enough grass, Mr. Fieldgrove’s 200 young calves began to lose weight. He ended up selling them at auction several weeks earlier-and 60 pounds per calf lighter-than planned. And he had to import hay to feed the mother cows he kept on his ranch for the winter.

The grasshoppers cost Mr. Fieldgrove about $30,000 in profit, he said-and local agricultural officials are warning him it could be worse this year.

Grasshoppers, which typically thrive in the west at densities of about eight mature insects per square yard, are a healthy part of the ecosystem-and food for birds such as the sage grouse. But last fall, surveys found 15 per square yard in hot spots, and those numbers are expected to rise this summer. Peak infestation areas can easily hit 60 or more hungry hoppers per square yard-a population so dense that they swarm over every surface on passing cars, cover country roads like a rug and lie so thick on grassy patches.

To try to get ahead of the problem, Wyoming has allocated $2.7 million for suppression efforts, including aerial spraying of the pesticide Dimilin, which is fatal to maturing grasshoppers. But Wyoming’s congressional delegation-concerned that’s not nearly enough-has demanded federal help.

“It does not appear as though the USDA has any sense of urgency in the face of this pending plague,” the delegation wrote in a letter to Agriculture Secretary Tom Vilsack last month.

Wyoming Gov. Dave Freudenthal this month weighed in as well, writing a public letter urging county, state and federal officials to join forces to prevent “economic and ecological damage.” The forecast, he said, suggests an infestation “with disastrous implications.”

Mr. Brown, of the USDA, said the department is aware of the severity of the problem but used up nearly all its $5.6 million grasshopper budget last fall counting the insect population-an annual task-and has no money to spray swaths of federally-owned range and grassland. He said the department is looking at ways to boost funding.

If the infestation reaches the level of the 1985 outbreak, he said, federal suppression efforts could cost $40 million.

Private landowners also face a hefty tab. Some have already ordered aerial sprays, at a cost of about $10 an acre, on land they consider most vulnerable.

They’re also hoping for help from Mother Nature. A cold, damp spell in late May or June could wipe out a good number of the baby grasshoppers, known as nymphs. But if the weather is warm and dry, “I don’t think we’ll grow a crop in this part of the country,” said Pete Lumsden, a farmer in Loring, Montana.

Many of the most destructive grasshopper species have poetic-sounding names: There’s the whitewhiskered grasshopper and the threebanded, spottedwinged, redshanked and bigheaded varieties as well. They feed voraciously, eating about half their body weight in foliage each day.

Grasshopper infestations tend to be cyclical; the numbers mount rapidly for two or three years and then plunge back to normal when the insects run out of food or a disease spreads through overcrowded swarms. Last year was fairly bad in several Western states, so this summer could well be the crest, after which the numbers will fall, entomologists said.

That’s little comfort to Mr. Lumsden, who hopes to harvest 2,200 acres of spring wheat and barley this year-if the grasshoppers don’t get it first. “It’s so very vulnerable,” he said.

Write to Stephanie Simon at stephanie.simon@wsj.com.

2. a) What damage might a grasshopper infestation do across the Western U.S. this year?
b) Describe the damage grasshoppers caused during the last infestation in 1985.

4. How is the state of Wyoming attempting to prevent grasshopper devastation this summer?

5. a) What is the USDA?
b) How is the USDA responding to Wyoming’s requests for help with the grasshoppers?

6. What hope do farmers and ranchers have in states that face grasshopper infestations this year?

The head of the department is the Secretary of Agriculture, who is a member of the Cabinet. The current Secretary is Tom Vilsack. (from wikipedia)

Read about grasshoppers at the University of Nebraska website ianrpubs.unl.edu/epublic/pages/publicationD.jsp?publicationId=575.]