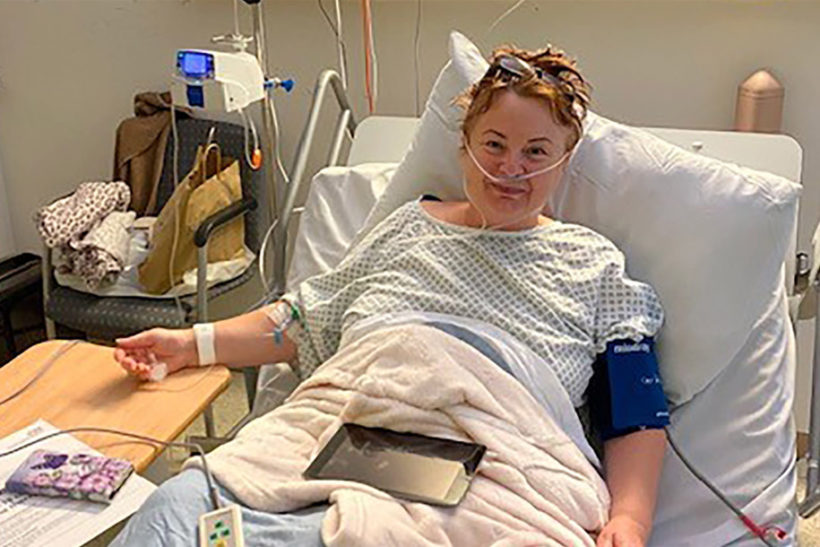 Melanie James following monoclonal antibody treatment for Covid-19 said she was "never in any doubt" about taking aprt in the trial after her condition "deteriorated very quickly."

(by Yaron Steinbuch, New York Post) — A woman in Wales said she was feeling “much better” after receiving the same experimental antibody* treatment for the coronavirus that President Trump did during his recent bout with the illness, according to a report. [*An antibody is a protein component of the immune system that circulates in the blood, recognizes foreign substances like bacteria and viruses, and neutralizes them.]

Melanie James, who lives in Cardiff, Wales received a transfusion of monoclonal antibodies at the University Hospital Llandough as part of a clinical trial, the BBC reported.

Although she was breathless and receiving oxygen, James said she felt “much better” after receiving the latest treatment to be added to the Randomized Evaluation of COVID-19 Therapy, (referred to as Recovery), clinical trial.

The trial seeks to determine the effectiveness of monoclonal antibodies in preventing the virus from entering the cells of patients and keeping them from becoming more severely ill, according to the news outlet.

When the bug enters the body, antibodies attach to its spikes, blocking it from entering the cells. But people produce many types of antibodies, the most potent of which are called neutralizing* antibodies. [*nuetralize: to make (something) ineffective].

So scientists “sieve” through them to find which are best at sticking to the spikes.

The chosen antibody [a monoclonal antibody] is multiplied in the lab, produced in large quantities and given to patients to boost their immune response.

James said she was “never in any doubt” about taking part in the trial after her condition “deteriorated very quickly.”

“I started to feel better the day after the transfusion, and only had a small amount of oxygen during that night,” James told the BBC. “Although I’m still recovering, I already feel much better than I did a week ago.”

She added: “I can’t speak highly enough of the treatment and care that I received from everybody involved, from clinical staff to the cleaners and those who offered me a drink.”

Cardiff and Vale University Health Board in Wales has recruited more than 210 people for the trial, which recently found the steroid dexamethasone to be the first drug proven to improve survival for the disease.

“We are delighted that Melanie is feeling better, and wish her all the best with her ongoing recovery at home, however it is important to acknowledge that this arm of the trial remains in its very early stages and the widespread effectiveness of this treatment isn’t yet known,” said Zoe Hilton, the health board’s research team leader, the BBC reported.

Professor Martin Landray of the University of Oxford, who is leading the Recovery trial, has told the BBC that the antibody treatment offered to Trump was based on “established technology, used previously to develop similar sorts of drugs against Ebola.”

NOTE: Before answering the questions, read the “Background” and watch the videos under “Resources.”

2. What is the benefit of treating Covid-19 with monoclonal antibodies as opposed to just antibodies (such as found in plasma)?

3. a) What is the purpose of the Recovery clinical trial?
b) How do antibodies help treat Covid-19?

4. How did Ms. James’ view her participation in the clinical trial for the monoclonal antibodies?

5. What caution did the Zoe Hilton, the health board’s research team leader, give regarding the treatment?

6. What assurance did Professor Martin Landray give regarding the treatment?

7. If you were diagnosed with Covid-19 and were asked by doctors if you wanted to be treated with the monoclonal antibodies in this clinical trial that Ms. James and President Trump were treated with, would you want to do so? Explain your answer.

8. We read/watch multiple bad news stories every day. Why is it important for people to learn about the progress being made by researchers and scientists in developing treatments and vaccines for Covid-19?

Are Monoclonal Antibodies the Future of COVID-19 Treatment?

In August 2020, the National Institutes of Health (NIH), under the Trump administration’s “Operation Warp Speed, announced a clinical trial (ACTIV-2) to evaluate the efficacy and safety of potential new therapeutics for COVID-19, including monoclonal antibodies to treat the disease.

University of North Carolina is one of more than 25 initial sites participating in the ACTIV-2 trial being conducted to evaluate the safety and efficacy of treatments for adults with COVID-19 who do not require hospitalization. Dr. David Wohl, a professor at UNC, answers questions below.

Note: An antibody is a protein component of the immune system that circulates in the blood, recognizes foreign substances like bacteria and viruses, and neutralizes them. After exposure to a foreign substance, called an antigen, antibodies continue to circulate in the blood, providing protection against future exposures to that antigen. (Read more at genome.gov)

Q: What exactly is a monoclonal antibody, and what does it do in the body?

Wohl: Monoclonal antibodies refer to antibodies that are all one type; that’s why they’re called monoclonal. They’re laboratory-made, and that’s different than what people think about when they think about, maybe, plasma. People have heard about donate plasma after surviving the disease. That plasma can be used to treat people who have the active disease. With COVID-19, I think there’s been really good press and awareness of the potential value of plasma in people who are suffering from more severe COVID-19 cases.

The whole idea of plasma is that you get a bunch of [different] antibodies from someone who survived [Covid-19], and you give it to someone who’s struggling to survive, and those antibodies kickstart their response to fight the virus.

Another nice thing about monoclonal antibodies: They work immediately. It’s not like a vaccine that your body has to make a response to—this is the response. Hopefully the idea is, it starts working right away and blocking the virus from getting into cells.

Q: Are there other diseases that have been treated with monoclonal antibodies?

Wohl: Not too many. Ebola happens to be one of them. … This is a new technology. We’ve considered it for people with HIV. We’ve found that there are some people who make really great antibodies against HIV, and so we’ve copied those antibodies and we’ve been using them in experiments to see if we can treat HIV—or even prevent HIV.

There is some precedent, but by and large, this is really a new technology and we don’t use it often. Certainly, antibody-derived therapy is used for other diseases. Certainly in immunological diseases …. So we have the same technology and same model being used here, but for an infectious disease.

Q: Why do you think monoclonals are a promising therapeutic class for treatment, as well as potentially prevention, of COVID-19?

Wohl: One thing I want to be clear about: We’re not restricted to monoclonals. If there’s another type or class of drug that comes along that looks promising for treatment and in outpatients, that could be clearly studied in the context of this study.

Right now, we tell people to go home, don’t infect anyone, and take Tylenol. We need something that we can actually treat people with to prevent them from getting sicker. I’m taking care of people in the ICU who, if we only had something effective that we could have given them early on, we probably could have prevented this from happening. So, we need this.

Q: You mentioned that the treatment would be delivered through infusion (an IV). Why is infusion being considered versus another method?

Wohl: Not all monoclonal antibodies are given by an infusion. Some are given by an injection in a muscle, or even some are being developed that are subcutaneous. The reason you can’t take it orally is because it’s a protein, similar to insulin. If you eat it, your body will digest it. Your body’s gastrointestinal tract juices will break down proteins. That’s what they’re supposed to do. So, you can’t take it as a pill. It also works quicker if it’s injected, one way or the other. So that’s why these treatments are either infused or injected.

The good thing about the treatment is it’s a one-time deal. So it’s not like you have to take a pill every day for three, five, seven, or 14 days. The idea behind these is you get it, and that’s it. (from a September 24 interview with Dr. Wohl)

READ more about monoclonal antibodies at the National Institutes of Health nih.gov.

The Trump administration launched Operation Warp Speed in May:
Operation Warp Speed’s goal is to produce and deliver 300 million doses of safe and effective vaccines with the initial doses available by January 2021, as part of a broader strategy to accelerate the development, manufacturing, and distribution of COVID-19 vaccines, therapeutics, and diagnostics (collectively known as countermeasures).  — Read more (video included) at hhs.gov.

Watch an August 4 NBC interview with Dr. Francis Collins of the National Institutes of Health announcing the next stage of the trials of the monoclonal antibody (first begun in June). President Trump was given these monoclonal antibodies: