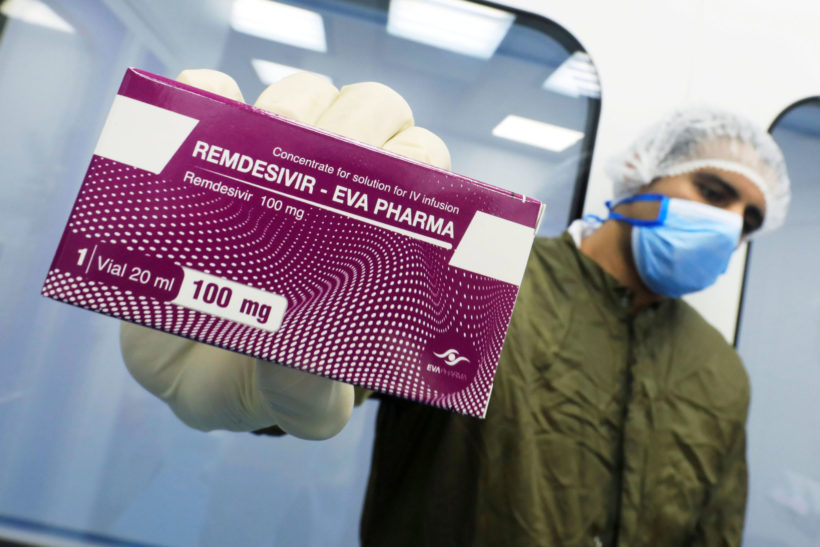 (by Associated Press at CBS News) — U.S. regulators on Thursday approved the first drug to treat COVID-19: remdesivir, an antiviral medicine given through an IV for patients needing hospitalization.

The drug, which California-based Gilead Sciences Inc. is calling Veklury, cut the time to recovery by five days — from 15 days to 10 on average — in a large study led by the U.S. National Institutes of Health (NIH).

It had been authorized for use on an emergency basis since spring, and now becomes the first drug to win full Food and Drug Administration approval for treating COVID-19. President Donald Trump received it when he was sickened earlier this month.

Veklury is approved for people at least 12 years old and weighing at least 88 pounds who need hospitalization for their coronavirus infection. For patients younger than 12, the FDA will still allow the drug’s use in certain cases under its previous emergency use authorization.

The drug works by inhibiting a substance the virus uses to make copies of itself. Certain tests are required before starting patients on it. And the label warns against using it with the malaria drug hydroxychloroquine, because that can curb its effectiveness.

“We now have enough knowledge and a growing set of tools to help fight COVID-19,” Gilead’s chief medical officer, Dr. Merdad Parsey, said in a statement.

The drug is either approved or has temporary authorization in about 50 countries, he noted.

…No studies have found it improves the odds of survival. Last week, the World Health Organization announced that a large study led by its organization found the drug did not help hospitalized COVID-19 patients, but that study did not include a placebo group and was less rigorous than previous ones that found a benefit., [facts that most news reports don’t mention]. …

Only one treatment — steroids such as dexamethasone — has been shown so far to cut the risk of dying of COVID-19. The FDA also has given emergency authorization to using the blood of survivors and two companies are currently seeking similar authorization for experimental antibody drugs.

From Associated Press, published at cbsnews .com.  Reprinted here for educational purposes only. May not be reproduced on other websites without permission from CBSNews.

1. What is remdesivir (aka Veklury)?

2. How does remdesivir work?

4. What effect does remdesivir have on patients who are treated with it?

5. What is hydroxychloroquine? Why shouldn’t it be used with remdesivir?

6. a) Veklury (remdesivir) is one treatment to be used along with others. It is not a cure. Many media outlets report that a “massive” WHO study finds remdesivir doesn’t work.” What important facts are omitted from these reports?
b) Why do you think many in the media frame the narrative in a way to dismiss any possible hope for remdesivir as an effective treatment, along with others, in fighting Covid-19?.

7. Do you think you would ask to be given Veklury if you were ill with Covid-19? Explain your answer.

(Read the whole letter if possible.) What is your impression of Veklury (remdesivir) from Dr. Parsey’s explanation?

From an Oct. 22 FDA Press Release:

Under the Federal Food, Drug, and Cosmetic Act, approval of a new drug product requires substantial evidence of effectiveness and a demonstration of safety for the drug’s intended use(s). In considering approval of a drug, the FDA conducts a benefit-risk assessment based on rigorous scientific standards to ensure that the product’s benefits outweigh its risks for the intended population. This is different from the standard used in the issuance of an Emergency Use Authorization (EUA).

The approval of Veklury was supported by the agency’s analysis of data from three randomized, controlled clinical trials that included patients hospitalized with mild-to-severe COVID-19.

One randomized, double-blind, placebo-controlled clinical trial (ACTT-1), conducted by the National Institute of Allergy and Infectious Diseases, evaluated how long it took for subjects to recover from COVID-19 within 29 days of being treated. The trial looked at 1,062 hospitalized subjects with mild, moderate and severe COVID-19 who received Veklury (n=541) or placebo (n=521), plus standard of care. Recovery was defined as either being discharged from the hospital or being hospitalized but not requiring supplemental oxygen and no longer requiring ongoing medical care. The median time to recovery from COVID-19 was 10 days for the Veklury group compared to 15 days for the placebo group, a statistically significant difference. Overall, the odds of clinical improvement at Day 15 were also statistically significantly higher in the Veklury group when compared to the placebo group.

A third separate, randomized, open-label multi-center clinical trial of hospitalized adult subjects with severe COVID-19 compared treatment with Veklury for five days (n= 200) and treatment with Veklury for 10 days (n= 197). Researchers evaluated the clinical status of subjects on Day 14. Overall, the odds of a subject’s COVID-19 symptoms improving were similar for those in the five-day Veklury group as those in the 10-day Veklury group, and there were no statistically significant differences in recovery rates or mortality rates between the two groups.

What are some of the ways the Trump administration is fighting Covid-19?