(by Paisley Dodds and David Stringer, YahooNews.com) AP, LONDON – Britain woke up to a new political era Wednesday with its first coalition government since World War II, an unlikely marriage between the reborn right-wing Conservative Party and the left-[leaning] Liberal Democrats. 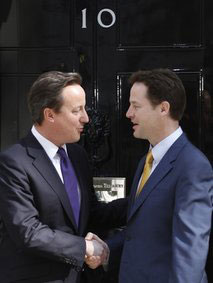 The alliance was necessary because no party won a majority of parliamentary seats in last week’s national vote. …

Once described as sandal-wearing hippie academics, Clegg’s Liberal Democrats have emerged from the political fringe to the top rung of government. The party is expected to gain five Cabinet seats and more than a dozen junior government roles in what will be one of the least experienced governments since Tony Blair’s Labour Party won a landslide victory in 1997.

“Of course, we must recognize that all coalitions are about compromise,” Cameron wrote in an e-mail to supporters. “This one is no different.”

Cameron said the coalition agreement commits the next government to a significantly accelerated reduction in the budget deficit, to cut 6 billion pounds ($8.9 billion) of government waste and to stop an increase in the national insurance tax.

Cameron wrote that the agreement allows Conservatives to move forward on school and welfare reform and rejects Liberal Democrat pledges to get rid of nuclear submarines, offer amnesty to illegal immigrants or handover any additional powers to the European Union.

The government will immediately begin tackling Britain’s record 153 billion-pound ($236 billion) deficit. It is still unclear whether the Liberal Democrats will back the Conservatives’ plan to begin immediate spending cuts …..

Bank of England governor Mervyn King gave a strong endorsement to the new government’s plans for attacking the deficit, calling it the single most important problem facing the United Kingdom.”

“And the agreement that I have been informed about that was been reached between the Conservatives and the Liberal Democrats is a very strong and powerful agreement to reduce that deficit and to take more action,” King said.

One of the first calls of congratulation to the new prime minister came from President Barack Obama, an acknowledgment of Britain’s most important bilateral relationship. Obama invited Cameron to visit Washington this summer.

Both Cameron and Clegg have acknowledged that Labour under Blair was too closely tied to Washington’s interests. Both men back the Afghanistan mission, but Cameron hopes to withdraw British troops within five years. Clegg has said he’s uneasy at a rising death toll. …

The new foreign secretary, William Hague, told the BBC that the new government wanted a “solid but not slavish relationship” with the United States and described the so-called special relationship between the two countries as being of “huge importance.”

“No doubt we will not agree on everything,” Hague said of the United States. “But they remain, in intelligence matters, in nuclear matters, in international diplomacy, in what we are doing in Afghanistan, the indispensable partner of this country.”

Hague is expected to speak by telephone later to U.S. Secretary of State Hillary Clinton, and soon travel to the United States and Afghanistan.

Relations with European neighbors could … become problematic. Cameron’s party is deeply skeptical over cooperation in Europe and has withdrawn from an alliance with the parties of Germany’s Angela Merkel and France’s Nicolas Sarkozy. Clegg, once a member of the European parliament, has long been pro-European.

Cameron extended his first invitation for formal talks to Sarkozy, who will visit London on June 18. The date is highly symbolic for France as it is the day that Charles de Gaulle launched his appeal from London via the BBC for the French to resist the Germans during World War II.

The coalition has already agreed on a five-year, fixed-term Parliament – the first time Britain has had the date of its next election decided in advance. Both sides have made compromise, and Cameron has promised Clegg a referendum on his key issue: reform of Britain’s electoral system aimed at creating a more proportional system.

Brown’s resignation Tuesday ends five days of uncertainty after last week’s general election left the country with no clear winner. It left Britain with its first so-called hung Parliament since 1974. Britain’s Conservatives won the most seats but fell short of a majority, forcing them to bid against the Labour Party for the loyalty of the Lib Dems.

Copyright ©2010 The Associated Press. All rights reserved. Reprinted here for educational purposes only. The information contained in this AP News report may not be published, broadcast, rewritten, or redistributed without the prior written authority of The Associated Press. Visit yahoo.com/s/ap/20100512/ap_on_bi_ge/eu_britain_election for the original post.

NOTE: The Prime Minister of the U.K. is appointed based on the fact that his/her party won the majority of seats in Parliament. In this month’s election, the Conservative party won the most seats, but did not have a majority, therefore they formed a coalition with one of the other two main parties, the Liberal Democrat Party.

1. Who is the new prime minister of England (the United Kingdom)?

2. What is significant about the following information having to do with the U.K. election:
a) the coalition government
b) the new prime minister’s age
c) the date of the next election
d) the hung Parliament (NOTE: a hung parliament is a parliament in which no party has won enough seats to control the parliament which would enable it to form the government)

3. a) Define coalition.
b) Why did the new prime minister (of the right-wing Conservative Party) form a coalition government with the left-wing Liberal Democrat party?

4. What actions does the coalition agreement commit the new government to take?

PRIME MINISTER OF THE U.K. (from en.wikipedia.org/wiki/Prime_Minister_of_the_United_Kingdom)

THE CONSERVATIVE PARTY [TORIES] (from en.wikipedia.org/wiki/Conservative_Party)

Read a commentary on the election results at nationalreview.com.

For background on the United Kingdom, go to the U.S. State Department website at state.gov/r/pa/ei/bgn/3846.htm.

Go to worldatlas.com for a map of the U.K.