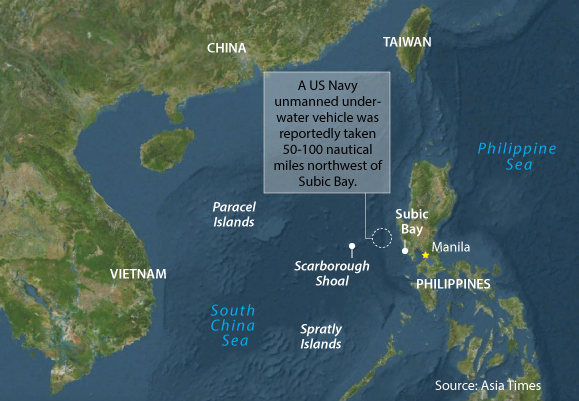 (by Phil Stewart, Reuters)  WASHINGTON — A Chinese warship has seized an underwater drone deployed by a U.S. oceanographic vessel in international waters* in the South China Sea, triggering a formal diplomatic protest and a demand for its return, U.S. officials told Reuters on Friday.

The incident, the first of its kind in recent memory, took place on Dec. 15 about 50 nautical miles northwest of Subic Bay off the Philippines just as the USNS Bowditch, an oceanographic survey ship, was about to retrieve the unmanned, underwater vehicle (UUV), officials said.

“The UUV was lawfully conducting a military survey in the [international] waters of the South China Sea,” one official said, speaking on condition of anonymity.

“It’s a sovereign immune vessel, clearly marked in English not to be removed from the water – that it was U.S. property,” the official said.

The Pentagon later confirmed the incident at a news briefing. It said the drone used commercially available technology and sold for about $150,000.

The seizure by the Chinese Navy will add to concerns about China’s growing military presence and aggressive posture in the disputed South China Sea, including its militarization of maritime outposts.

A U.S. think tank last week said new satellite imagery indicated China has installed weapons, including anti-aircraft and anti-missile systems, on all seven artificial islands it has built in the South China Sea. Mira Rapp-Hooper, a senior fellow in the Asia-Pacific Security Program at the Center for a New American Security, said China would have a hard time explaining its actions.

“This move…is highly escalatory, and it is hard to see how Beijing will justify it legally,” Rapp-Hooper said.

The drone was part of an unclassified program to collect oceanographic data including salinity, temperature and clarity of the water, the U.S. official added. The data can help inform U.S. military sonar data since such factors affect sound.

The USNS Bowditch, a U.S. Navy ship crewed by civilians that carries out oceanographic work, had already retrieved one of two of its drones, known as ocean gliders, when a Chinese Dalang 3 class vessel took the second one. [According to a US defense official, the unmanned glider had come to the surface of the water in the South China Sea and was about to be retrieved by the USNS Bowditch when a Chinese naval vessel that had been shadowing the Bowditch put a small boat in the water.]

Officials said the Bowditch was only 500 yards from the underwater drone and, observing the Chinese intercede, used bridge-to-bridge communications to demand the drone be returned. [Chinese sailors in the small boat came alongside the drone and grabbed it despite the radioed protests from the Bowditch that it was US property in international waters. The incident happened about 100 miles north-west of the Philippines’ port of Subic Bay.]

The Chinese ship acknowledged the communication but did not respond to the Bowditch’s demands, Davis said.

“The only thing they said after they were sailing off into the distance was: “we are returning to normal operations,” Davis said.

The United States issued the formal demarche, as such protests are known, through diplomatic channels and included a demand that China immediately return the drone. The Chinese acknowledged it but have not responded, officials said.

1. Define the following as used in the article:
-oceanography
-international waters
-sovereign
-immune

3. a) What is the USNS Bowditch?
b) How was the unmanned underwater vehicle (UUV) being used?

4. a) Describe the incident that occurred on Friday, including China’s response.
b) How did one U.S. official describe the UUV? How did the Chinese know they were stealing our drone?

6. In addition to the theft of the U.S. drone, what recent actions by China in the South China Sea are viewed with concern?

7. a) As of Saturday, the Chinese acknowledged the U.S. demarche, but had not responded, officials said. Then Chinese officials said we were making a big deal over nothing. What do you think of the U.S. response to China’s seizure of our drone? (not tough enough, too aggressive, the correct reaction to China)? Explain your answer.
b) Ask a parent: Do you think Donald Trump will do a better or worse job than President Obama in dealing with an aggressive China? Explain your answer.