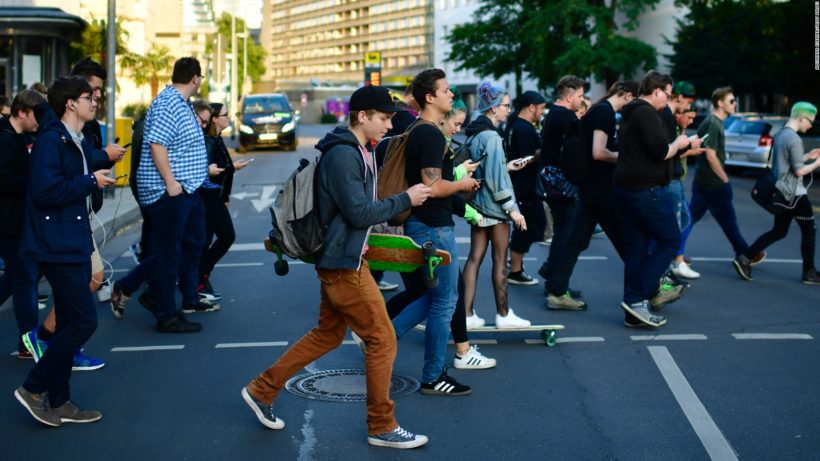 Note: This story was published on November 8 at chicagotribune .com)

(by Bill Ruthhart, Chicago Tribune) – A pair of key Chicago Democratic aldermen want to fine pedestrians up to $500 if they’re caught texting or using a cellphone while walking through an intersection, an idea that quickly drew skepticism from city transportation officials and a noncommittal response from Democratic Mayor Rahm Emanuel.

The proposed ordinance, which would still have to pass the full City Council, calls for fines of $90 to $500 for each incident of using a mobile device while crossing a street or highway.

“The goal of the introduction of this measure is to reduce pedestrian deaths and injuries, especially at crosswalks,” longtime Alderman Edward Burke, 14th, one of Chicago’s most powerful Democrats, said in a news release. Burke is co-sponsoring the proposed ordinance with Democratic South Side Ald. Anthony Beale, 9th, who predicted it would “increase safety by eliminating distractions for pedestrians [at intersections and elsewhere” across the city.] The two aldermen cited statistics showing 27 pedestrians were killed in the first half of 2017 — an increase of one death from the same period last year. From 2011 through 2015, the city averaged 20.8 pedestrian fatalities, according to data from the Illinois Department of Transportation.

Burke and Beale did not present any data or information on how many of those deaths involved a pedestrian using a mobile device. Luann Hamilton, the city’s deputy transportation commissioner, said Wednesday (Nov. 5th) that there is no data showing a link between distracted walking and an increase in pedestrian deaths.

Asked whether he backed the idea, Emanuel said he would have to review it.

“Everybody does it, and then everybody’s irritated when somebody else does it,” the mayor said of pedestrians walking distracted by a phone. “So my total view is I want to look at it. I think it has something to do with people’s own safety and their attention around their own environments and around them, and for their own safety and the safety of others.”

Downtown Democratic Ald. Brendan Reilly wasted no time dismissing the idea of fining pedestrians during an afternoon appearance on the “Roe Conn Show” on WGN-AM 720. Reilly said the city has a hard enough time enforcing other laws already on the books, such as speeding through intersections.

“As someone who has bounced off the hood of a cab in the middle of a crosswalk, I can tell you those folks need to pay much closer attention to how they’re driving,” Reilly said of cabdrivers, in particular.

“This is a serious issue, but we can’t micromanage every part of everyone’s life. At some point, common sense needs to kick it in: it’s not a good idea to walk through traffic looking at your cellphone, just like it’s not a good idea to play soccer in the middle of the expressway,” said Reilly, 42nd. “These are things you just don’t do. I don’t think you need a $500 fine to dissuade it.”

Reprinted here for educational purposes only. May not be reproduced on other websites without permission from the Chicago Tribune.

2. a) What is an alderman?
b) Define ordinance.

3. How do aldermen Burke and Beale explain the goal of their proposed ordinance?

4. What statistics do the alderman use to support their proposal?

5. How does Chicago’s deputy transportation commissioner refute the aldermen’s assertion?

6. For what reasons is Ald. Brendan Reilly opposed to the proposed ordinance? Be specific.

7. What other cities have passed similar bans on texting while walking?

8. With whom do you agree: Aldermen Burke and Beale or Alderman Reilly? Explain your answer.