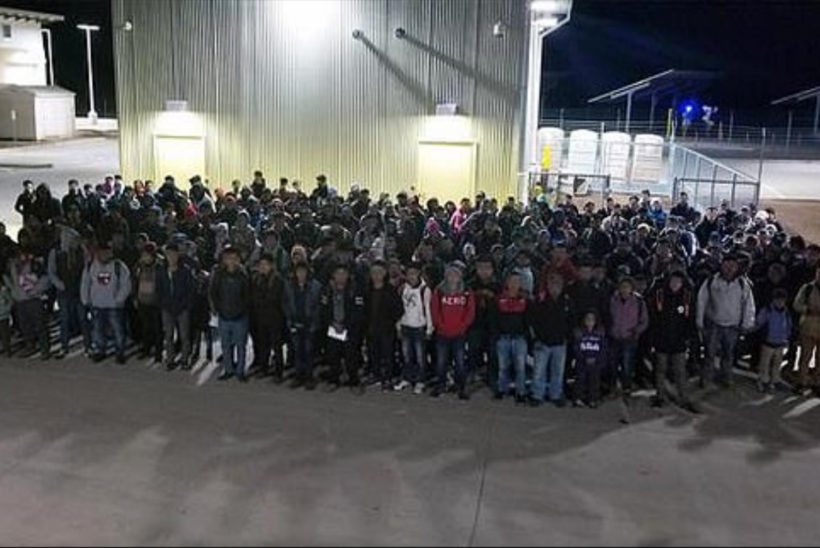 In New Mexico, this group of 247 illegally crossed into the U.S. near the Antelope Wells Port of Entry in January. CBP's chief calls the situation 'a border security and humanitarian crisis' (Daily Mail)

(Compiled from articles by Bob Fredericks, New York Post and Aaron Martinez, El Paso Times) — U.S. Customs and Border Protection Commissioner Kevin McAleenan and Chief of Operations at Border Patrol HQ Brian Hastings held a news conference Tuesday in Washington D.C. to announce a huge increase in the number of apprehensions being made by Border Patrol agents on the U.S.-Mexico border.

A stunning 76,103 asylum seekers were nabbed at the southern border in February, more than double the 36,751 held the same month a year earlier and a number on pace to reach levels not seen in more than a decade.

CBP Commissioner McAleenan told reporters that his agency was taking steps to expand medical care for the growing numbers who require it upon entering the U.S. and was building a new facility in El Paso, Texas, to help cope with the surge.  He said the facility would be in a centralized location…while also noting that the new processing center and medical policies are not a solution.

“I want to underscore a key point here,” McAleenan said. “While our enhanced medical efforts and new facilities will help with managing the increase flows and while we continue to do all that we can to address these increases in traffic safety and humanely, the fact is these solutions are temporary and the situation is not sustainable. …

The system is well beyond capacity and remains at a breaking point. …

This is clearly both a border security and a humanitarian crisis.”

McAleenan called for immediate action by U.S. lawmakers in addressing asylum and immigration laws that he said were helping to create the humanitarian crisis at the Southwest border.

“Regardless of anyone’s preferred policy outcome, the status quo is unacceptable,” McAleenan said.

Roughly 90 percent of the migrants hail from Guatemala, Mexico’s southern neighbor.  Many simply hop on a bus rather than trekking by foot or in a caravan, cutting their travel time to the border to a week or less, he said.

Brian Hastings, the agency’s chief of law enforcement operations, told reporters the numbers are up because immigrants know how to game the system — and that hundreds of “families” show up at the border with children who are not their own.

“It’s well-known at this time that adults with children will not be detained during the immigration proceedings for illegal entry. The word of mouth and social media quickly gets back to those in the Northern Triangle countries, that if you bring a child, you’ll be successful,” Brian Hastings, the agency’s chief of law enforcement operations, told reporters, referring to Guatemala, Honduras and El Salvador.

Hastings added that since April 2018, border agents had encountered about 2,400 cases in which migrants had falsely claimed to be related when they were not, or lied about being younger than 18.

As Congress debates President Trump’s declaration of a national emergency at the Mexican border, the number of what the feds call “family units” seeking asylum was expected to climb in March and April as the weather improves. …..

The surge has left Border Patrol agents straining under the load as they try to keep up with the mounting number of men, women and children who present themselves as asylum seekers.

In 2018, roughly 65 percent of the applicants for asylum were denied, according to a Syracuse University website that tracks asylum cases.

But once asylum seekers are in the country and have submitted an application, only those deemed dangerous will be detained.

Low-risk migrants can be released into the community near where they surrendered.

“I am a northern border-state senator with a southern border crisis. It is drugs, it is meth, it is destroying our communities and families in Montana,” Daines said.

President Trump has prioritized border security and his long-promised wall on the southern border since he announced he was running for president in 2015.

The Republican controlled Senate is expected to vote next week and join the Democrat-led House in rejecting his national emergency declaration aimed at building border walls, but Trump would almost certainly veto the measure and the issue is likely to be settled in the courts.

Excerpted from NYPost .com. Reprinted here for educational purposes only. May not be reproduced on other websites without permission from the New York Post.

2. How many migrants were apprehended at the border in the month of February?

3. What points did CBP Commissioner McAleenan stress to reporters about CBP’s expanded medical facilities for treating migrants claiming asylum on the southern border? Be specific.

4. Brian Hastings is Chief of Operations at Border Patrol HQ. What points did he make about families showing up at the border? Be specific.

5. Since last April, in how many cases have border agents discovered migrants falsely claiming to be related when they were not, or pretending to be a minor (younger than 18) when they were actually adults?

7. President Trump declared a national emergency on our southern border after Congress would not authorize the money he requested to build a wall/barrier/fencing to secure the border.  The Democrat-controlled House opposed his national emergency declaration.  The Republican-controlled Senate is also expected to oppose the president.  Watch all of the videos under “Resources.”  Consider the facts laid out by the heads of Border Patrol.
a) What do you think: Is it, as CBP Commissioner Kevin McAleenan asserted, “both a border security and a humanitarian crisis” or is this no crisis? Explain your answer.
b) Find out where your state’s Representative and Senators did or will vote on the president’s national emergency declaration. Did each vote the way you think they should have? Explain your answer.

The following Border Patrol news releases are from March 5-6: