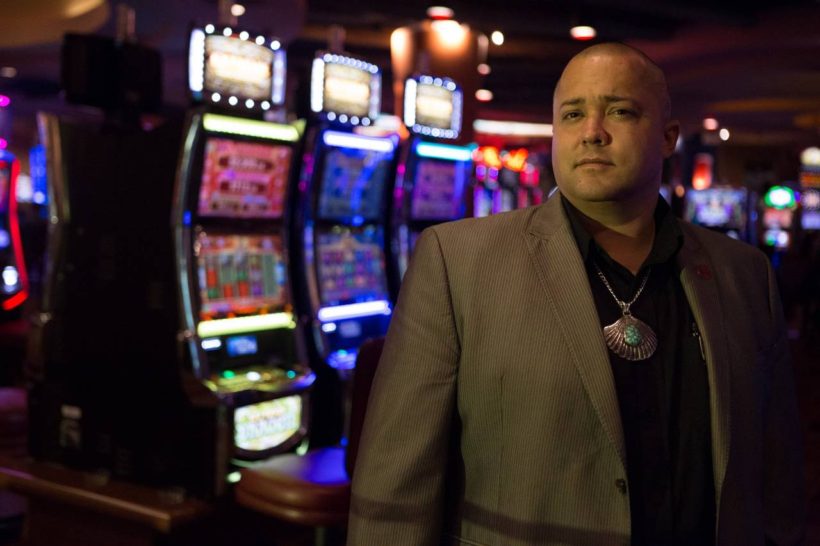 (by Dan Frosch and Melanie Trottman, The Wall Street Journal) — A battle is brewing in Congress over legislation that would exempt Native American casinos from a federal labor law allowing workers to unionize.

The bill, which cleared the House last week, has support from an unusual mix of Republicans and Democrats who argue the exemption is critical to keeping Indian tribes’ fragile economies afloat. But it has also garnered opposition from labor unions that call it an affront to workers’ rights, and from President Barack Obama, who is pushing for changes to the bill.

For years now, Native American leaders have argued that the National Labor Relations Act [NLRA], which grants workplace protections to most private sector* employees, should not apply to tribal casinos—much like it exempts federal, state and local governments. Indian casinos, they argue, are extensions of tribal governments, and have become such a critical part of their budgets that labor disputes could cripple tribes. (*private sector are privately owned businesses compared to the public sector, which are government jobs)

“The casino revenue [income] from tribes funds essential day–to-day services,” said Jason Giles, executive director of the National Indian Gaming Association, which represents 184 of 245 tribes with gaming operations. “If the revenue were ever to stop, you would see a return to the types of poverty that existed before tribal gaming.”

Net Indian gaming revenue in 2014 accounted for $10.4 billion that went directly to tribal governments, according to the group, and in many cases funded the majority of tribal operations, like police, fire and social services.

But union officials, who estimate that there are more than 600,000 employees connected to tribal casinos, say the bill would strip workers of collective bargaining rights and other protections under the NLRA, like the right to seek workplace improvements without retaliation.

“The AFL-CIO believes in both tribal sovereignty and worker solidarity. We don’t have to choose,” said AFL-CIO President Richard Trumka.

In urging members of Congress to oppose the bill last week, union officials cited the 2004 National Labor Relations Board ruling that the legislation seeks to overturn.

In that case, which involved the San Manuel Indian Bingo and Casino in California, the board ruled that applying the NLRA would not interfere with the tribe’s autonomy. It noted that the casino was a commercial enterprise that employed and catered to non-Native Americans.

Union officials said the majority of casino workers who would be affected by the bill aren’t Native American.

“We want these casinos to succeed,” said Bill Samuel, a lobbyist for the [unions’] AFL-CIO, but “why should they live under a different set of rules” than non-Indian competitors?

Tribal officials said fears of workers being shielded from labor protections were overblown, noting that tribes had long been friendly to unions. They said the legislation was important to affirm that tribes be afforded the same rights as local governments, noting that those workers directly employed at casinos are tribal employees.

“I believe Indian Country has become sophisticated enough and the gaming industry is competitive enough to where is there is no way we cannot afford to treat our employees well,” said Joseph Talachy, governor of the Pojoaque Pueblo in New Mexico.

According to Mr. Talachy, roughly 80% of the tribe’s approximately $15 million annual budget comes from casino-related revenue.

In particular, the Buffalo Thunder resort and casino, tucked among the canyons and mesas of northern New Mexico, has been a boon for the pueblo’s [town] economy, he said. On a recent weekday, the casino buzzed with activity—as elderly native women played slots and several well-dressed men huddled around blackjack tables.

The majority of tribal casino workers around the U.S. are not unionized, and the measure could put them further out of unions’ reach.

Some unions, like Unite Here, have reached labor agreements with individual tribes that could pave the way for unionization. The union already represents thousands of tribal union members in California. Its president, D. Taylor, likened the opposition to the legislation to the fight against income inequality.

Mr. Obama has also voiced opposition and wants changes to the measure. According the White House Office of Management and Budget, he could support the legislation if tribes were required to adapt labor practices equivalent to NLRA standards.

It is unclear whether the Senate will take up the measure before Congress adjourns for the holidays.

1. Describe the legislation that passed the House last week and is supported by both Democrats and Republicans.

3. a) What arguments do Native American leaders (and their Congressional supporters) make for why the National Labor Relations Act should not apply to tribal casinos? Be specific.
b) Approximately how much income (revenue) do tribal casinos generate per year?
c) How is the casino revenue used by the tribes?
d) How much of New Mexico’s Pojoaque Pueblo budget comes from casino-related revenue?

4. What negative effect does the director of the National Indian Gaming Association say unionizing could have on Native American communities?

5. In paragraph 7, AFL-CIO President Richard Trumka is quoted as saying, “The AFL-CIO believes in both tribal sovereignty and worker solidarity. We don’t have to choose.” Do you agree with this assertion? Explain your answer.

6. “We want these casinos to succeed,” said Bill Samuel, a lobbyist for the [unions’] AFL-CIO, but “why should they live under a different set of rules” than non-Indian competitors?” Could the casinos succeed if the employees were unionized?
If possible, ask the opinion of one person who supports unions and one person who does not believe unions are necessary with the protections American workers have under the law today.

7. There is no information in the article about how the tribal employees feel about being permitted to unionize (do they want to?), or whether the tribal casinos pay and treat their employees fairly (are employees underpaid or under-compensated? Do employees feel they are not treated fairly?). In your opinion, who makes the better argument: tribal leaders or the unions? Explain your answer.