Cameras to Catch Speeders and Scofflaws Are Spreading—And Sparking Anger

(by William M. Bulkeley, WSJ.com) – The village of Schaumburg, Ill., installed a camera at Woodfield Mall last November to film cars that were running red lights, then used the footage to issue citations. Results were astonishing. The town issued $1 million in fines in just three months.

But drivers caught by the unforgiving enforcement — which mainly snared those who didn’t come to a full stop before turning right on red — exploded in anger. Many vowed to stop shopping at the mall unless the camera was turned off. The village stopped monitoring right turns at the intersection in January.

Once a rarity, traffic cameras are filming away across the country. And they’re not just focusing their sights on red-light runners. The latest technology includes cameras that keep tabs on highways to catch speeders in the act and infrared license-plate readers that nab ticket and tax scofflaws.

Drivers — many accusing law enforcement of using spy tactics to trap unsuspecting citizens — are fighting back with everything from pick axes to camera-blocking Santa Clauses. They’re moving beyond radar detectors and CB radios to wage their own tech war against detection, using sprays that promise to blur license numbers and Web sites that plot the cameras’ locations and offer tips to beat them.

Cities and states say the devices can improve safety. They also have the added bonus of bringing in revenue in tight times. But critics point to research showing cameras can actually lead to more rear-end accidents because drivers often slam their brakes when they see signs warning them of cameras in the area. Others are angry that the cameras are operated by for-profit companies that typically make around $5,000 per camera each month.

“We’re putting law enforcement in the hands of third parties,” says Ryan Denke, a Peoria, Ariz., electrical engineer who has started a Web site, Photoradarscam.com, to protest the state’s speed cameras. Mr. Denke says he hasn’t received a ticket via the cameras.

Protests over the cameras aren’t new, but they appear to be rising in tandem with the effort to install more. Suppliers estimate that there are now slightly over 3,000 red-light and speed cameras in operation in the U.S., up from about 2,500 a year ago. The Insurance Institute for Highway Safety says that at the end of last year, 345 U.S. jurisdictions were using red-light cameras, up from 243 in 2007 and 155 in 2006. …

Municipalities are establishing ever-more-clever snares. Last month, in a push to collect overdue taxes, the City Council in New Britain, Conn., approved the purchase of a $17,000 infrared-camera called “Plate Hunter.” Mounted on a police car, the device automatically reads the license plates of every passing car and alerts the officer if the owner has failed to pay traffic tickets or is delinquent on car taxes. Police can then pull the cars over and impound them.

New Britain was inspired by nearby New Haven, where four of the cameras brought in $2.8 million in just three months last year. New Haven has also put license-plate readers on tow trucks. They now roam the streets searching for cars owned by people who haven’t paid their parking tickets or car-property taxes. Last year 91% of the city’s vehicle taxes were collected, up from “the upper 70s” before it acquired the technology, says city tax collector C.J. Cuticello.

Not that it’s been smooth sailing. Mr. Cuticello recalls the time he tried to help tow the car of a woman who owed $536. She knocked him over, jumped in the car and drove away. She was later arrested for a hit-and-run.

City leaders have generally maintained that while revenue is a welcome byproduct of traffic citations, the laws are in place to improve public safety or reduce accidents.

But a study in last month’s Journal of Law and Economics concluded that, as many motorists have long suspected, “governments use traffic tickets as a means of generating revenue.” The authors, Thomas Garrett of the St. Louis Fed and Gary Wagner of the University of Arkansas at Little Rock, studied 14 years of traffic-ticket data from 96 counties in North Carolina. They found that when local-government revenue declines, police issue more tickets in the following year. Officials at the North Carolina Association of Chiefs of Police didn’t respond to requests for comment.

George Dunham, a village trustee in Schaumburg, says installing the red-light camera at the mall “wasn’t about the revenue — no one will believe that, but it wasn’t.” On the other hand, he says, with fuel taxes and sales taxes falling, its retreat on the camera has had a “painful” impact on Schaumburg’s $170 million budget.

Cameras to catch speeders on highways, which are common in Europe, are just starting to spread in the U.S. Last June, Arizona added a provision for speed cams on highways to its budget bill, with an anticipated $90 million in fines expected to help balance the budget. 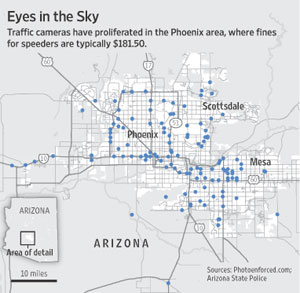 State police started placing the cameras on highways around Phoenix in November. In December, a trooper arrested a man in Glendale while he was attacking a camera with a pick ax. In another incident, a troupe of men dressed as Santa Claus toured around the city of Tempe in December and placed gaily wrapped boxes over several traffic cameras, blocking their views. Their exploits have been viewed more than 222,000 times on YouTube.

Republican state representative Sam Crump has introduced a bill in the legislature to remove the cameras, which he says were approved “in the dead of night…as a budget gimmick.”

In the meantime, the cameras are still being rolled out, and have already issued more than 200,000 violation notices since September. They are set to take a picture of cars going more than 11 miles over the speed limit, and they also photograph the driver.

Some entrepreneurs are trying to help camera opponents fight back. Phantom Plate Inc., a Harrisburg, Pa., company, sells Photoblocker spray at $29.99 a can and Photoshield, a plastic skin for a license plate. Both promise to reflect a traffic-camera flash, making the license plate unreadable. California passed a law banning use of the spray and the plate covers, which became effective at the beginning of this year.

A free iPhone application available on Trapster.com lets drivers use their cellphones to mark a traffic cam or speed trap on a Google map. The information on new locales is sent to Trapster’s central computer, and then added to the map.

Other anti-cam Web sites counsel people to examine the pictures that come in the mail with citations. If the facial image is too blurry, they say, drivers can often argue successfully in court that no positive identification has been made of them.

Studies are mixed on whether traffic cameras improve safety. Some research indicates they may increase rear-end collisions as drivers slam on their brakes when they see posted camera notices. A 2005 Federal Highway Administration study of six cities’ red-light cameras concluded there was a “modest” economic benefit because a reduction in side crashes due to less red-light running offset the higher costs of more rear-end crashes.

A study of crash causes released by the National Highway Traffic Safety Administration last July found about 5% of crashes were due to traveling too fast and 2% were from running red lights. Driving off the side of the road, falling asleep at the wheel and crossing the center lines were the biggest causes identified.

1. Re-read para. 1-2. Do you think that the village of Schaumburg should have stopped monitoring traffic at Woodfield Mall? Explain your answer.

2. Why do city and state governments say they use traffic monitoring cameras?

3. How can traffic cameras lead to accidents?

5. a) In addition to police cars, what other vehicles have been fitted with the Plate Hunter cameras in New Haven?
b) What do you think of the city tax collector personally trying to help tow the car of a woman who owed car-tax money to the city?

6. What did a study in the Journal of Law and Economics conclude about local governments’ motive for increasing the number of traffic tickets written?

7. In Arizona, Republican state rep Sam Crump has introduced a bill to remove traffic monitoring cameras, saying they were approved “in the dead of night…as a budget gimmick.” Do you support Rep. Crump’s legislation? Explain your answer.

8. What types of services are entrepreneurs providing for citizens opposed to traffic cameras?

9. Do you support the use of cameras to monitor drivers? Explain your answer.  Discuss this article and your answer with a parent.