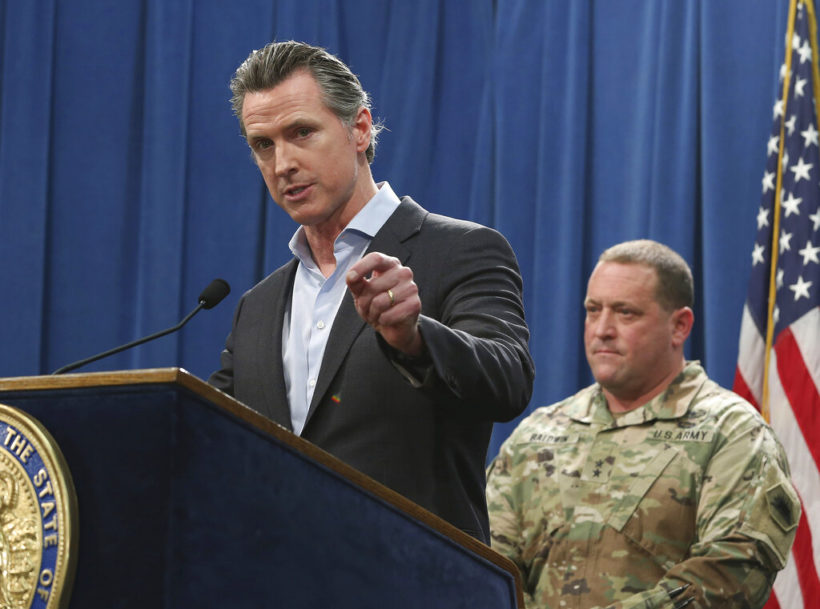 California Gov. Gavin Newsom discusses his decision to withdraw most of the National Guard troops from the nation's southern border on Monday, Feb. 11, 2019, in Sacramento, Calif. Maj. Gen. David Baldwin, right, the adjutant general of the California Military Department, looks on. (AP)

(Compiled from Reuters, US News and Press TV) — SACRAMENTO, Calif. – California Governor Gavin Newsom on Monday signed an order withdrawing more than two-thirds of the state’s National Guard troops from the U.S.-Mexico border, calling President Trump’s declarations that there is a crisis on the border nothing but “political theater.”

Newsom said most of the roughly 360 National Guard members deployed to the border would be reassigned to other duties in the state, with about 100 remaining behind as part of a task force targeting drug trafficking and cartels.

“This whole border issue is a manufactured crisis. We are not interested in participating in this political theater,” Newsom said at an afternoon news conference in Sacramento.

The governor, a Democrat who took office in January, said border crossings were at their lowest level since 1971 and that the state’s undocumented population had dropped to a more than 10-year low.

“This is pure politics, period full stop,” he said.

Newsom’s predecessor, Governor Jerry Brown, agreed to send National Guard troops to the border last April after reaching agreement with the Trump administration that they would focus on fighting criminal gangs and smugglers and not enforce immigration laws.

California’s original order to send troops to the border, signed by Gov. Brown, a Democrat who sought out areas to cooperate with the federal government, set a deadline of March 31 for the deployment to end. Newsom’s plan will reportedly call on troops to be removed immediately, though it will allow the withdrawal to proceed until March 31.

Newsom said some of the National Guard troops would be re-deployed to help fight what he said were mushrooming illegal marijuana farms following approval of a 2016 ballot measure to legalize recreational cannabis – legislation the governor helped pass.

“We have to hold accountable those who are not participating in the legal cannabis market,” he said. “These illegal grows are manifesting, getting bigger.”  [They also avoid paying the millions in tax dollars the state is collecting from legal pot growers.]

Gov. Newsom’s announcement comes on the heels of a similar move last week by New Mexico Gov. Michelle Lujan Grisham, a Democrat who ordered the withdrawal of most National Guard troops deployed at the border by her Republican predecessor at Trump’s request last year. Grisham denied Trump’s contention that there is a crisis at the border, calling it a “charade.”

The two states’ previous governors had agreed last year to a Trump administration request to send troops to the border; the decision to withdraw the service members effectively bucks the president’s request for support, signaling perhaps a new tone from the two Democratic governors, who were each newly elected to their offices in November.

Trump has made building a wall on the US-Mexico border a priority of his presidency, constantly pointing to threats from illegal immigrants.

However, Democrats have sought to thwart that, saying it is unnecessary and a waste of money.

The president has deployed an extra 3,750 U.S. troops on the border this month.

Compiled from Reuters, US News and Press TV. Reprinted here for educational purposes only.

2. a) For what reason is Gov. Newsom taking this action?
b) For what purpose is the governor leaving 100 of the California National Guard troops stationed at the border?
c) What do you think: would leaving the entire 360 be more effective in dealing with these criminals or did the governor make the right move? Explain your answer.

3. a) Which other governor made the same move prior to Gov. Newsom’s announcement?
b) For what reason did she do so?

4. Do you think the governors’ predecessors who sent National Guard troops to the border believed there is a crisis at the border? Explain your answer.

5. From para. 12-13: President Trump has made building a wall on the US-Mexico border a priority of his presidency, constantly pointing to threats from illegal immigrants. However, Democrats have sought to thwart that, saying it is unnecessary and a waste of money.
The president has asked Democrats to consider the criminal gangs, drug traffickers, human traffickers as well as the caravans of thousands of people traveling over 1,900 miles from Central America through Mexico to claim asylum in the U.S., overwhelming Border Patrol. The White House reports: “Gangs like MS-13 use our weak borders to gain entry into the country and target unaccompanied minors for recruitment.”
Do you think it is important to secure the border and for states to send National Guard troops? Or do you think it is not a crisis? Explain your answer.

6. Whether they support or oppose illegal immigration, or unlimited asylum seekers, what responsibility do you think Democratic and Republican leaders have to take this issue seriously?

From the White House website: The Crisis at the Southern Border Is Too Urgent to Ignore, Issued on: January 10, 2019