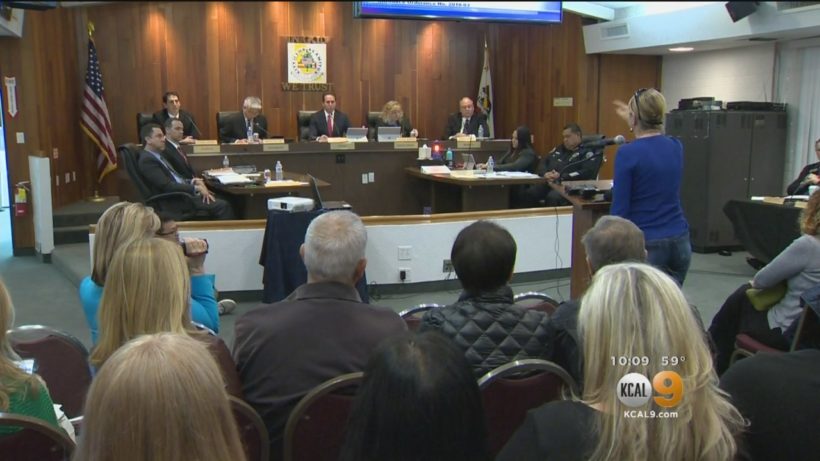 (by Ray Downs, UPI) — A small California city voted Monday to opt-out of the state’s so-called “sanctuary” law, which is aimed at blocking the federal government (ICE) from detaining undocumented immigrants after they have been arrested.

The city council for Los Alamitos, a Southern California town of about 11,200 people located 20 miles south of Los Angeles, voted 4 to 1 to be exempt from [recently passed California law] SB-54, which prohibits local law enforcement from reporting undocumented immigrants arrested for minor crimes to U.S. Immigration and Customs Enforcement (ICE).

The four members of the city council voting in favor of the measure said SB-54 puts Los Alamitos at odds with the U.S. Constitution, the Orange County Register reported.

Councilman Warren Kusumoto, who introduced the legislation, said the issue was not about immigration. “This council is looking out for the constituents in our city,” he said.

[Mayor Troy Edgar said he hoped mayors in other cities consider similar local legislation. And his message was clear: “As the mayor of Los Alamitos, we are not a sanctuary city.”].

Councilman Mark Chirco voted against the measure because of the possibility of a lawsuit from the state. “We disagree with Sacramento on a lot of things,” he said, according to the Los Angeles Times. “Are we not going to follow state law every time we disagree with them? I don’t think that would be prudent.”

But the City of Los Alamitos will get involved in a lawsuit against the state.

The vote on Monday brought emotional responses from Los Alamitos residents on both sides of the issue.

Some praised Kusumoto as a “patriot” while others vowed to vote out councilmembers who were in favor of the anti-sanctuary measures, according to the Register.

On the city’s Facebook page, several people slammed the city and threatened to boycott it while others praised the measure.

“As a Long Beach resident and neighbor I often shop and dine in Los Alamitos,” wrote Steve Boyer. “Not any longer. What a pointless and hateful gesture you just made – it will only serve to drive customers away from your town hurting your own businesses and tax base and invite legal challenge.”

“As a Southern California resident, legal immigrant and U.S. citizen I applaud you and your citizens,” wrote Chris Anderson. “It shows that there are Californians and cities which stand on the side of law and wont be intimidated by government officals on state level and other cities’ unlawfulness behavior and demands.”

[During Monday night’s meeting, one long-time resident, Javier Mejia, choked up as he described that he’s proud of his Mexican heritage but is “100 percent American.” He urged the council to vote for the proposed ordinance.

The new local law is not yet a done deal. Before it becomes law, council members must vote for it a second time, which is expected. That vote is scheduled for April 16.]

From UPI .com. First published March 20, 2018. Reprinted here for educational purposes only. May not be reproduced on other websites without permission from United Press International.

NOTE TO STUDENTS: While you might not feel strongly about the sanctuary city issue, others around you might take a strong position on one side or the other. Learn to logically defend your position, and politely respect your neighbor’s point of view. And if your neighbor gets argumentative with you, remind each other that both sides need to be tolerant of the other’s point of view. Sometimes it’s better to agree to disagree and avoid that topic if too emotional.

2. For what reason did the city council vote in favor of the measure to opt-out of the California law?

3. How did Councilman Warren Kusumoto (who introduced the legislation) explain his reasons for doing so?

4. What did Mayor Troy Edgar say about the legislation?

5. Why did Councilman Mark Chirco vote against the measure?

6. What separate measure did the city council also vote for on Monday night?

7. The town council voted 4-1 in favor of opting-out of California’s sanctuary law. Why do you think the majority of voters most likely agreed with the vote?

What You Need to Know About Sanctuary Cities:

The term “sanctuary cities” generally refers to jurisdictions that refuse to cooperate with lawful Federal immigration enforcement efforts, often by rejecting immigration “detainer” requests from U.S. Immigration and Customs Enforcement (ICE). When local law enforcement arrests an illegal alien on criminal charges, ICE issues a detainer, which is a request that the local authority notify ICE before releasing the alien and maintain custody for a short time so that ICE may take custody for removal purposes. Sanctuary jurisdictions, including many big cities, refuse to comply with ICE’s detainer requests.

WHY: Sanctuary city policies cause dangerous criminal aliens to be released into our communities, putting innocent lives at risk.

Sanctuary cities are preventing Federal authorities from locating and arresting dangerous criminal aliens and removing them from our country. Sanctuary policies in California have allowed the release of numerous criminal aliens charged with serious crimes who could continue to harm communities. For example:

When sanctuary city officials refuse to honor ICE detainer requests, they are putting the public and law enforcement officers at risk. If ICE cannot arrest illegal or criminal aliens in the controlled environments of police stations or jails, it must perform its lawful immigration enforcement duties in workplaces, in residences, or in the streets. Even worse, when sanctuary city officials warn illegal aliens about possible upcoming immigration enforcement activities, they allow criminals to prepare themselves, endangering innocent bystanders and putting law enforcement at greater risk.
(from whitehouse.gov)