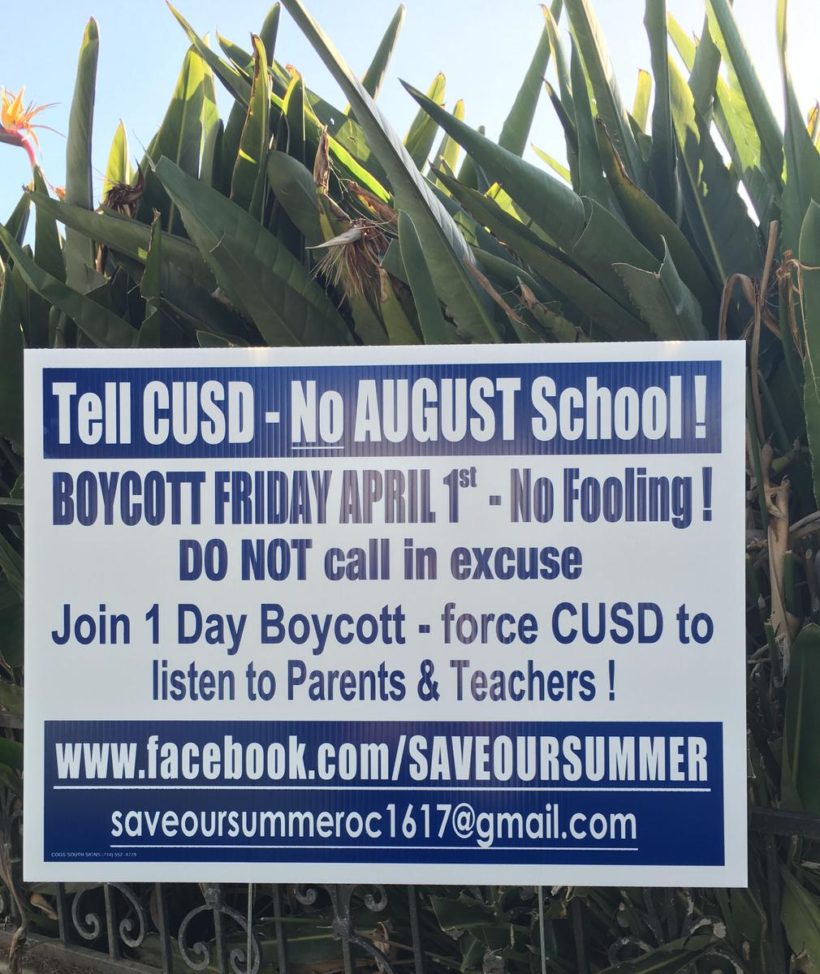 “Boycott Friday, April 1st! This is no joke!” says a flyer that parents were circulating Wednesday via e-mail and a “Save Our Summer” Facebook page.

Members of the group said they hope to get the district’s attention and force a new dialogue, feeling that the district didn’t adequately seek feedback before making the change and then granted only token parent participation after a backlash.

CUSD historically has begun classes in September, after Labor Day. A year ago, the school board adopted calendars for two school years, opening school on Aug. 22 for last fall’s term and projecting an Aug. 15 start for the coming school year.

Parents protested the change, gathering more than 3,000 signatures on a Facebook petition, but trustees reaffirmed the Aug. 15, 2016, start date at a board meeting in October.

“The main issue is that the board went back on their promise and made their decision without parents,” said parent Gould Workman of Ladera Ranch. “If the majority of the families in our district really want to start the school year earlier, we wouldn’t be doing this. They haven’t given us our right in expressing what we want for our families and our kids.”

Protesting parents said that families plan beach vacations or beach time for the heat of August and don’t buy the district’s argument that AP scores will rise if students get an earlier start. CUSD has been one of California’s highest-performing large districts, even before making the change, Workman said.

Laguna Niguel parent Carrie Cook said AP scores were never an issue before, and her kids, AP students, do well.

“We really enjoy our summer,” she said. “No one wants to be indoors in August.”

Emily Hefti of Laguna Niguel said a bigger issue is that she feels parents aren’t being listened to and the board may be “getting comfortable not having to be accountable for the decisions they make.”

Reprinted here for educational purposes only. May not be reproduced on other websites without permission from The Orange County Register. For the original article, visit ocregister .com.

1. Why did a group of parents in a California school district call for a one-day student boycott of classes?

2. What did the parents hope to achieve by staging a one-day boycott?

4. How did the parents quoted in the article explain their reasons for protesting? Be specific.

5. For what reason do you think the district spokesman didn’t return phone calls and emails from the reporter seeking comment on the issue?

6. a) If the majority of parents want the school start date to stay the way it has always been, should the school district be able to change it for the reasons they have stated? With whom do you agree? Explain your answer.
b) Ask a parent the same question.