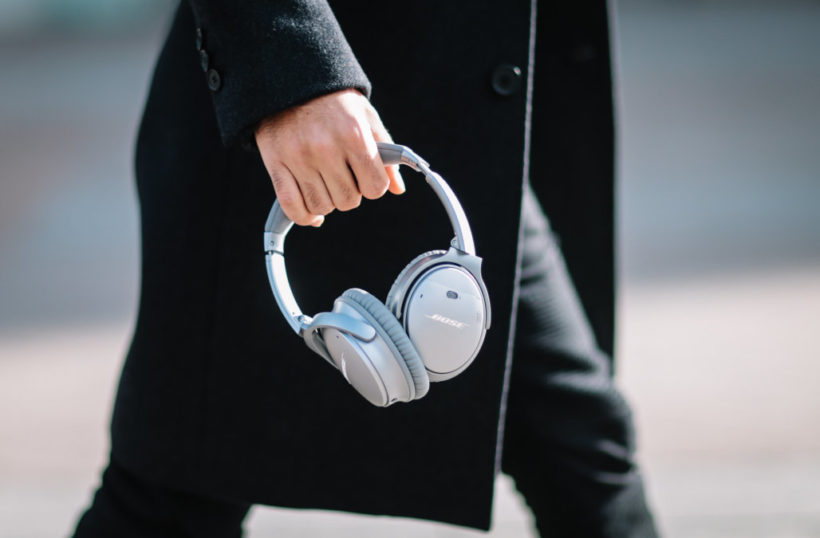 (by Jonathan Stempel, Reuters) – Bose Corp spies on its wireless headphone customers by using an app that tracks the music, podcasts and other audio they listen to, and violates their privacy rights by selling the information without permission, a lawsuit charged. [Bose introduced the app in 2016, according to the lawsuit. The app — which, paired with a number of wireless products, enables users to pause, resume, rewind and skip songs playing on their smartphones — was promoted on the boxes of the wireless products and on the Bose website.]

The complaint filed Tuesday (April 18) by Kyle Zak in federal court in Chicago seeks an injunction to stop Bose’s “wholesale disregard” for the privacy of customers who download its free Bose Connect app from Apple Inc or Google Play stores to their smartphones.

“People should be uncomfortable with it,” Christopher Dore, a lawyer representing Zak, said in an interview. “People put headphones on their head because they think it’s private, but they can be giving out information they don’t want to share.”

Bose did not respond on Wednesday to requests for comment on the proposed class action* case (*class action is a lawsuit filed by an individual or small group acting on behalf of a large group). The Framingham, Massachusetts-based company has said annual sales top $3.5 billion.

Zak’s lawsuit was the latest to accuse companies of trying to boost profit by quietly amassing customer information, and then selling it or using it to solicit more business.

After paying $350 for his QuietComfort 35 headphones, Zak said he took Bose’s suggestion to “get the most out of your headphones” by downloading its app, and providing his name, email address and headphone serial number in the process.

But the Illinois resident said he was surprised to learn that Bose sent “all available media information” from his smartphone to third parties such as Segment.io, whose website promises to collect customer data and “send it anywhere.”

Audio choices offer “an incredible amount of insight” into customers’ personalities, behavior, politics and religious views, citing as an example that a person who listens to Muslim prayers might “very likely” be a Muslim, the complaint said.

He also wants a halt to the data collection, which he said violates the federal Wiretap Act and Illinois laws against eavesdropping and consumer fraud.

Zak’s attorney Dore, a partner at Edelson PC, said customers do not see the Bose app’s user service and privacy agreements when signing up, and the privacy agreement says nothing about data collection.

[Zak, who uses his smartphone several times a day to select music tracks to listen to through his wireless headphones, would never have purchased the product had he known the headphones would also be listening to him, according to the lawsuit, which is seeking in excess of $5 million in damages.] The case is Zak v Bose Corp, U.S. District Court, Northern District of Illinois, No. 17-02928.

1. What does Illinois resident Kyle Zak accuse Bose of doing in the lawsuit he has brought against the company? Be specific.

2. How did Bose respond to requests for comment on Zak’s proposed class action lawsuit?

3. What surprised Mr. Zak about Bose?

4. What does Mr. Zak want from Bose? Be specific.

5. How does Zak’s attorney explain the reasons behind the lawsuit? (On what grounds are they suing Bose?)

6. What do you think: does Kyle Zak make a good argument in his lawsuit against Bose? Explain your answer.