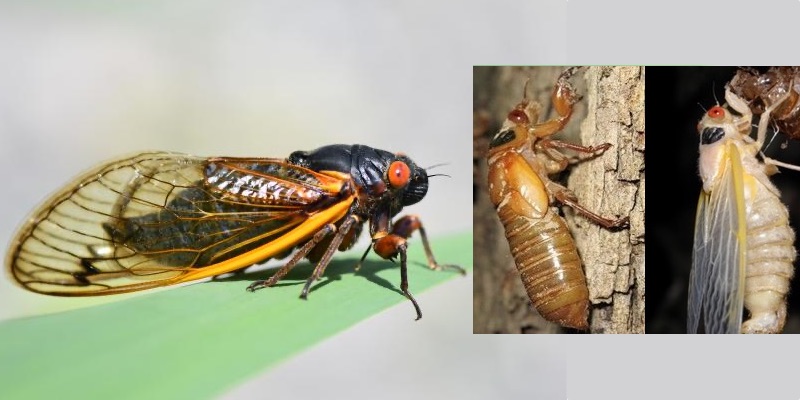 NOTE: While they can be extremely noisy, cicadas are not otherwise harmful. They will not bite or sting you or your pets because they do not have stingers nor biting mouthparts. Cicadas, unlike locusts, do not cause major harm to plants as well but can harm plants in some smaller ways.

(by Julia Musto, Fox News Digitial with the AP) — A brood of periodical* cicadas is set to emerge from underground for the first time in 17 years. (*Periodical events or situations happen occasionally, at fairly regular intervals.)

Brood X, also known as the Great Eastern Brood or the “Big Brood,” will likely first emerge across the southeastern U.S. at the beginning of spring, before surfacing in states along the East Coast.

Americans can likely expect to see the swarm across 15 states as the ground temperature warms, according to a mapping site from the University of Connecticut, including the District of Columbia, Delaware, Maryland, Virginia, West Virginia, North Carolina, Pennsylvania, New Jersey, New York, Ohio, Michigan, Illinois, Indiana, Kentucky, Georgia, and Tennessee. 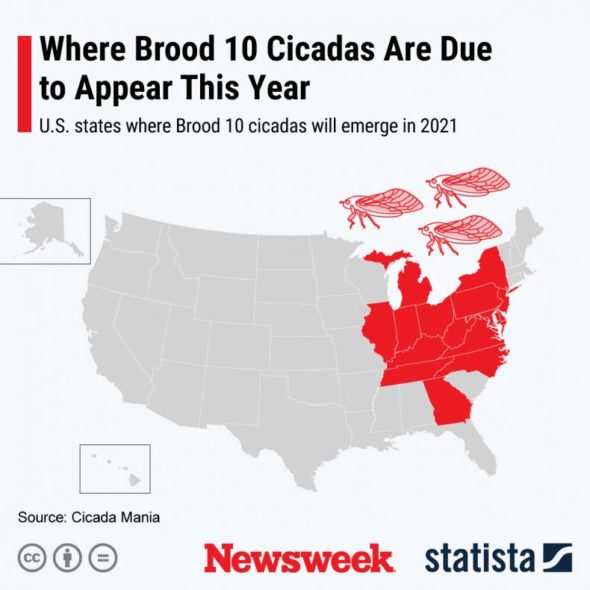 “The reason that this is such an impressive event…is number one: it happens nowhere else on the planet. We have periodical cicadas. There are cicadas on every continent except Antarctica, but it’s just in the eastern half of the United States that we have the periodical cicadas,” the University of Maryland’s professor emeritus, an entomologist, Dr. Michael Raupp told Fox News on Tuesday.

“The other piece of this puzzle is that they’re going emerge in massive numbers. And, when I say massive, I mean massive,” he continued. “There are going to be as many as 1.5 million cicadas per acre. This is going to translate up and down the coast west of the Mississippi — people say billions. I tend to hyperbole, but I’m saying there are probably going to be trillions.”

“That’s a whole lot of acres in there, so there are going to be a lot of cicadas up and out of the ground in the middle of May and the end of May this year,” Raupp said.

The black-bodied insects with bright red eyes last appeared en masse in 2004. … For almost two decades, a larval Brood X has survived a foot or more below the ground, living on sap from tree roots.

According to the National Wildlife Federation, periodical cicadas will come out as adults every 13 or 17 years, unlike regular cicadas (sometimes called annual cicadas).

Cicadas are likely best known for their loud mating calls — which are different for each species, the Post noted, with songs reaching up to 100 decibels.

Once a cicada successfully mates, the female cicadas will deposit tens of eggs in tree branches where the larvae or “nymphs” then hatch and burrow into the soil.

After their two-to-four-week jaunt, the adult cicadas die [soon after mating].

The next generation will surface in 2038.

There are six species of periodical cicadas in the eastern U.S., according to CNET. Brood X is one of the largest broods of 17-year cicadas.

But, not to worry: the [cicadas are] largely harmless…. [They do not sting or bite].

Raupp recommended that people who might be afraid of cicadas try to learn as much about them as they can.

Published at nypost .com. Reprinted here for educational purposes only. May not be reproduced on other websites without permission from the New York Post.  The Associated Press contributed to this report.

2. In how many states will the Brood X cicadas emerge?

3. What is significant about the Brood X emergence? Be specific.

4. How are periodical cicadas different from regular cicadas?

5. How harmful are cicadas to humans or animals?

CHALLENGE: Read about periodical cicadas under “Background” and “Resources” below.

OPTIONAL: Do you live in an area where the Brood X cicadas will emerge? Consider sending a short video clip of cicadas in your neighborhood to editors@studentnewsdaily.com.

Experts say Brood X, one of the largest broods of periodical cicadas, with a 3″ wingspan, will soon be emerging after 17 years underground to lay their eggs in trees. The eggs will hatch 4-6 weeks later, and the “big brood” will spend 2-4 weeks in late May and June mating.

The cicadas can emit sounds between 80 and 100 decibels.

Some cicadas emerge annually while others emerge every 13 or 17 years depending on the species. Brood X will head back underground this year to emerge again in 2038. (from WTVO mystateline .com, March 5)

There are 15 periodical broods of cicadas and two appear to have gone extinct. As opposed to annual broods, which emerge every year from July to September, periodical broods stay underground for either 13 or 17 years, depending on the brood.

According to University of Maryland’s entomologist Michale Raupp, this one is unique because it is known as “the big brood” and has the largest geographic distribution, with cicada populations ranging from Georgia up to New York. With cicadas emerging across an area that widespread.. it will make for a wonderful learning opportunity for million.s of people, Raupp said.

Should the 2021 brood show up as expected, it would mark the 18th documented appearance of the Brood X cicadas, dating back to their first chronicling in 1715. According to The Pennsylvania Magazine of History and Biography, the brood was first noted by the Rev. Andreas Sandel in Philadelphia and then again by botanist John Bartram in 1732.

After their third emergence in 1746, Swedish explorer Pehr Kalm wrote about his amazement at the brood’s vast spread and how constant their buzzing was.

“The general opinion is that these insects appear in these fantastic numbers in every 17th year. Meanwhile, except for an occasional one which may appear in the summer, they remain underground,” he wrote in 1756 paper for a Swedish academic journal.

Visit cicadamania.com for Brood X info, including the areas in each of the 15 states in which they are expected to emerge.