Ben Carson ‘not worried’ by Trump 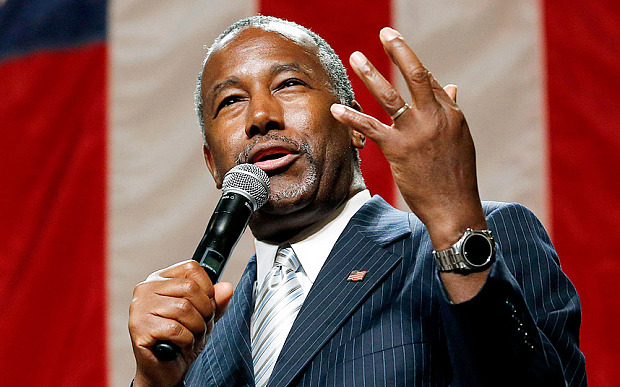 (by Ruth Sherlock, London’s Daily Telegraph)  Washington — As the Republican presidential candidates prepare for their second televised debate of the campaign on Wednesday night, latest polling showed that one candidate at least does not fear frontrunner Donald Trump.

Ben Carson, the retired neurosurgeon, says he is “not the slightest bit” worried about sharing the stage with Mr. Trump, and a New York Times/CBS News poll showing him at 23 percent to Mr. Trump’s 27 percent suggested his confidence is not misplaced. “The Donald” has been publicly firing salvoes of insults at Dr. Carson, accusing him of lacking energy and implying he is not “smart” enough to lead.

“That is the claim of someone who doesn’t really know me,” Dr. Carson told the Telegraph. “Someone who hasn’t seen me standing at the operating table for 10, 12, 18 hours doing complex surgeries, dealing with complex situations that come up at the last moment.”

He speaks calmly and when asked what he thinks of the business mogul as a human being, the country’s most famous physician chuckles and answers, almost with affection: “I think he is Donald Trump.”

All this is part of a plan. When the lights go up on the podium at the Ronald Reagan Presidential Library in Simi, California, Dr. Carson will most likely try to be the “grown up” anti-establishment choice – the anti-Trump.

He will want to show that he can defy political convention with as much vigor as his rival, while at the same time coming across as the more responsible candidate: the person you would rather trust with possession of the nuclear codes.

By the laws of conventional politics, both Mr. Trump and Dr. Carson might be considered joke candidates for a presidential race: neither has ever held public office and both are not conventional – the one a larger than life television show host wheeler-dealer, the other and a doctor who doesn’t believe in evolution.

But in a campaign where much of the electorate appears intent on exacting revenge on politicians in Washington, from whom, polls show, they feel alienated – perhaps more than ever before – it is Mr Trump and Dr Carson who are surging ahead in the crowded Republican field.

In no poll this month has any other candidate managed to score in double figures – Jeb Bush, Marco Rubio and Mike Huckabee all tied on 6 per cent in Tuesday’s eve of debate poll.

Language that is vitriolic, simple, and infused with patriotism is what this year’s Republican base is rewarding.

To that end, Dr. Carson, who is best known for being the first neurosurgeon to successfully separate twins who had been joined at the head, likes to talk tough on foreign policy [which will be the topic of tonight’s CNN debate].

In a wide-ranging interview with the Telegraph, Dr. Carson said Europe was letting itself be “beholden” to Russia. Vladimir Putin “pretty much has a stranglehold” on the continent when it comes to energy, he said.

[Addressing the British reporter interviewing him, Dr. Carson said,] “You get a lot of your natural gas from him, a lot of oil because Europe for the most part is reluctant to exploit your own energy resources. [Europe] is very much against fracking and other methods of extracting resources, and it’d much rather buy it from Putin. That gives him undue sway.”

On the Middle East, the doctor, like Mr. Trump, describes the contexts of the wars in Syria and Iraq as “complex” and then focuses on one enemy: Islamic State of Iraq and the Levant (Isil/ISIS).

The jihadist group is an existential threat against whom America should go to war, he believes: no holds barred, including troops on the ground.

“You can’t stick your head in the ground and hope they will go away. Going and singing kum-bah-yah by the fire does not work,” he said, describing how he thinks the current administration has handled the jihadist takeover of Iraq and Syria.

“You know, Isil are looking like winners, so of course people want to be on the winning team. If you really want to defeat them you have to make them not look like winners – that means take that land back from them, and you are not going to be able to do that by dropping bombs in the desert.”

Experience in the private sector [as opposed to a job in government or politics] is polling as the single most important quality voters are looking for in the three key states of Iowa, New Hampshire and South Carolina. Voters don’t want a politician; they want a businessman.

To that end Dr. Carson has sought to rival Mr. Trump by playing up his role as the leader of social responsibility committees in major corporations: “Maybe Mr. Trump doesn’t know that I spent 18 years on the board of Kellogg company and 16 years at Costco.”

He has avoided the inflammatory personal attacks that have become trademark Trump. While the business mogul likes to rant loudly at public gatherings at his rivals and make sweeping, sometimes insulting assertions the doctor speaks in a tone so quiet it is sometimes hard to hear him.

He focuses on Christian values, and on his own tale of being brought up by a single mother who worked three jobs to raise her children without accepting government help.

He uses his personal narrative to reinforce his conservative message of repealing taxes, and cutting government-run social assistance programs in favor of supporting the work of charitable donations.

“She thought you could do it on your own and not be beholden to anybody else,” he says. “She got a lot of arguments from a lot of people who said, come on, you can sit at home, the government will give you money.

It was this quietly spoken narrative that won Dr Carson the first Republican debate, the most viewed in the country’s history, according to a poll by the hosts, Fox News.

While Donald Trump provided the entertainment, with verbal attacks on host Megyn Kelly, the doctor’s last-minute reminder to viewers of his ground-breaking surgery, and his calm demeanor, ultimately won approval.

Tonight on CNN, the host of the second debate, is going to work to encourage more dialogue and debate between the candidates, rather than a simple question and answer format. That is going to inspire more fights. We’ll find out soon whether there are limits to Dr Carson’s level head and cool demeanor.

1. a) What are Dr. Ben Carson’s credentials?
b) What 2-3 words would you use to describe Dr. Carson’s personality based on the reporter’s description?

2. What does the reporter think Dr. Carson will try to convey to voters during the debate tonight?

3. What is significant about the two men who are the top candidates in the Republican primary?

4. a) The topic of tonight’s debate will be foreign policy. What is Dr. Carson’s position on dealing with ISIS?
b) Do you agree with his assertions? Why or why not?
c) Ask a parent the same question.

5. Based on polls, voters say the most important quality in a candidate is having experience in the private sector. How does Dr. Carson address this in relation to his career?

6. From the article, where does Dr. Carson stand on economic issues?

CHALLENGE: Watch tonight’s debate between the candidates. Pay attention to the questions the moderators ask. Fill in the “Presidential Primary Debate” chart for the questions below: