Ben Carson meets with Syrians at refugee camps in Jordan 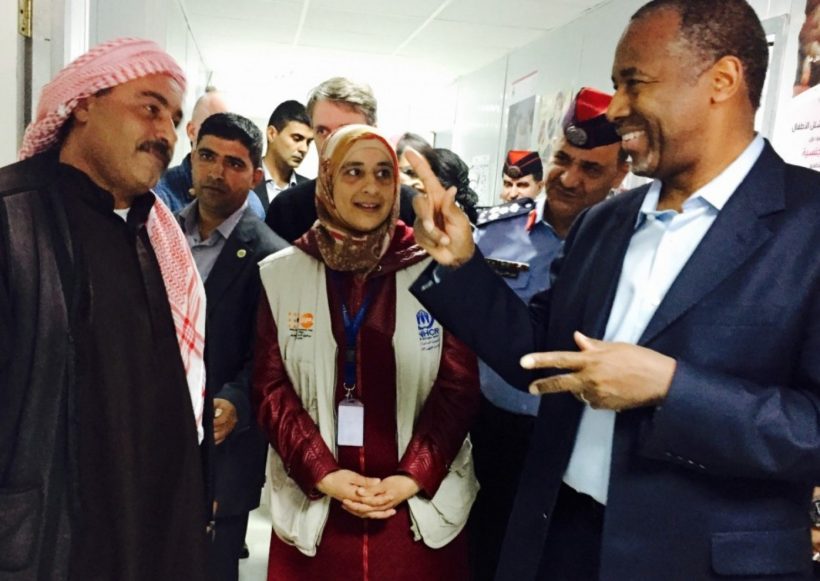 (by Dylan Stableford, YahooNews) – Dr. Ben Carson says the Syrian refugees he met during his trip to the Middle East don’t want to come to the United States – they want to go home.

“I had an opportunity to talk to many of the Syrian refugees and ask them, ‘What is your supreme desire?’ And it was pretty uniform: They want to go back home,” Carson said on ABC’s “This Week” Sunday. “I was a little bit surprised with the answer, because it wasn’t what we’re hearing a lot. We’re hearing that they all want to come here to the United States. And that’s not what they want. They want to go back home.”

The Republican presidential candidate was speaking from Amman, Jordan, where he visited two refugee camps in an effort to better understand the crisis while attempting to beef up a foreign policy résumé his own advisers recently described as weak.

“Their true desire is to be resettled in Syria,” Carson said on CNN’s “State of the Union.” “But you know, they are satisfied to be in the refugee camps if the refugee camps are adequately funded. Recognize that in these camps, they have schools. They have recreational facilities that are really quite nice. And they are putting in all kinds of things that make life more tolerable.”

Carson said he supports the refugee program that is currently in place in the Middle East, saying the United States and its allies must do more to help fund it.

“It seems like everybody in the international community is spending more time saying, ‘How can we bring refugees here?’ rather than, ‘How can we support a facility that is already in place that the refugees are finding perfectly fine when it’s adequately funded?’” Carson said on CBS’ “Face The Nation.”

“If you do that, you solve that problem without exposing the American people to a population that could be infiltrated with terrorists who want to destroy us,” he said on ABC. “If you can eliminate the possibility of terrorists infiltrating them and wanting to destroy us, you have a different argument. But I don’t see that being eliminated.”

Carson was then asked if he thought there were terrorists among those refugees he talked to.

“I don’t know whether there were or not,” he replied. “But I do know that the ISIS terrorists have said that if we bring refugees, that they would infiltrate them. And why wouldn’t they?”

Earlier this month, Carson was criticized for comparing Syrian refugees to rabid dogs.

“If there is a rabid dog running around your neighborhood, you’re probably not going to assume something good about that dog, and you’re probably gonna put your children out of the way,” Carson said. “Doesn’t mean that you hate all dogs by any stretch of the imagination.”

On Sunday, the retired neurosurgeon stood by those comments.

“The Syrians and the people here completely understood what I was saying,” Carson said on NBC’s “Meet The Press” Sunday.“ “It’s only the news media in our country that thinks that you’re calling Syrians dogs. They understand here that we’re talking about the jihadists, the Islamic terrorists. And it’s very obvious to most of them. The reception is quite warm. So maybe they can teach us a little bit about how to interpret language.”

Reprinted here for educational purposes only. May not be reproduced on other websites without permission from YahooNews.

2. a) What did Syrian refugees tell Dr. Carson that surprised him?
b) Why was he surprised by this?

3. Are you surprised by what Dr. Carson learned firsthand in the refugee camps? Explain your answer.

4. a) What does Dr. Carson say the U.S. should do regarding the Syrian refugees?
b) Do you agree? Ask a parent if he/she agrees with Dr. Carson’s suggestion. Discuss your answers.

5. What danger does Dr. Carson say is posed by bringing Syrian refugees to the U.S.? How does he explain this assertion? Do you agree with his assertion? Explain your answer.

6. Watch the interview with Dr. Carson under “Resources” below.
a) What does he say about Jordan?
b) What did he ask the Syrian refugees he talked to?
c) How did they respond?
d) What point does he make about bringing 10-25,000 Syrian refugees to the U.S.?
e) What do you think about this assertion? (from d) Explain your answer.
Opinion question. Answers vary.
f) What do you think about the interviewer’s questions? Were you able to tell how she felt about Dr. Carson’s observations on the refugees?

7. What do you think of the overall interview clip: Is Dr. Carson uncompassionate? Is he a fearmonger? Are his observations and assertions unreasonable? Explain your answers.

8. Why do you think no reporters from CNN, Reuters, The NY Times, CBS, NBC, ABC… have done what Dr. Carson did and talked to the refugees or reported on what Jordan is doing firsthand?

Visit Dr. Carson’s twitter page for more on his trip to Jordan.

Watch a clip from a CNN interview with Dr. Carson: