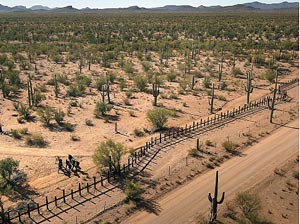 (by Paul Davenport, Yahoonews.com) PHOENIX, [AP] – Arizona lawmakers want more fence along the border with Mexico – whether the federal government [builds it] or not.

They’ve got a plan that could get a project started using online donations and prison labor. If they get enough money, all they would have to do is get cooperation from landowners and construction could begin as soon as this year.

Gov. Jan Brewer recently signed a bill that sets the state on a course that begins with launching a website to raise money for the work, said state Sen. Steve Smith, the bill’s sponsor.

“We’re going to build this [web]site as fast as we can, and promote it, and market the heck out of it,” said Smith, a first-term Republican senator from Maricopa.

Arizona – strapped for cash and mired in a budget crisis – is already using public donations to pay for its legal defense of the SB1070 illegal immigration law. …..[The Obama administration is currently suing the State of Arizona to block the enforcement of the state’s SB1070.]

The nearly 2,000-mile U.S.-Mexico border already has about 650 miles of fence of one type or another, nearly half of it in Arizona. The state’s 376-mile border is the busiest gateway for both illegal immigrants and marijuana smuggling. …..

Minimum-security prisoners already have been used to clear brush in immigrants’ hiding spots near the border and clean up trash and other material dumped by border-crossers, he said.

At 50 cents an hour, “we are a relatively inexpensive labor force,” Ryan said. “If we have the funding to do it, we’re capable of doing it.”

Arizona’s existing border security fund is being used to pay for legal costs of defending SB1070 in court, though Brewer’s 2010 executive order creating the fund allows its money to be used for any “border security purpose.” A federal judge has blocked…key parts of SB1070, but Brewer [is taking] the case to the U.S. Supreme Court….

The fund through [May 4] has received nearly 44,000 donations totaling more than $3.7 million, collected online and through mailed donations since May 2010. Roughly half of the money has been spent, and Brewer spokesman Matthew Benson said the balance is also needed for SB1070-related legal expenses.

Smith and other supporters of the border-fence legislation haven’t produced any cost estimates for the state project, saying only that the state should be able to do it far more inexpensively than the federal government. …..

Brewer signed the Arizona fence bill on April 28, and it will take effect with most other new state laws on July 20. …..

During committee hearings and floor debates, Republicans said the state has a legal and moral obligation to take action because the federal government hasn’t done enough to secure the border.

“My constituents want this thing fixed and fixed once and for all, and we’re going to do it,” Republican Sen. Al Melvin of Tucson said during a February committee hearing. “People should not be dying in the desert.” …..

Under the bill [SB 1406], the border fencing work could be done either in conjunction with other border states or by Arizona alone.

Smith said the committee will consider where to build the fence and what kind of fence is needed.

But the eventual choice could be like double- and triple-fence barriers already installed along the border in Yuma County in southwestern Arizona because they appear to block crossings, he said.

Any type of fence would require approval of landowners, but Smith said he expects that to be forthcoming from the state and private land owners, including ranchers who have complained of break-ins and other trouble associated with smugglers and illegal crossings.

Individual ranchers likely will cooperate with the state fencing project, just as they have done with federal officials on placing helipads, watering stations and communications equipment to help officers patrolling the border, an Arizona Cattle Growers Association official said. …..

Copyright ©2011 Associated Press. All rights reserved. Reprinted here for educational purposes only. The information contained in this AP news report may not be published, broadcast, rewritten, or redistributed without the prior written authority of the Associated Press.  Visit news.yahoo.com/s/ap/20110509/ap_on_re_us/us_border_fence_donations for the original post.

1. a) Arizona Governor Jan Brewer just signed a bill into law [SB1406]that will allow Arizona to raise funds for, and then build, a fence on the Arizona border with Mexico. How does the state propose to raise the funds, and then afford to build the fence? [Read about SB 1406 under “Background” below the questions.]b) This bill proposes using prison inmates to work on the border fence construction. Many inmates prefer to do a day’s work rather than sit in prison all day. Conservatives would generally support this idea. Liberals would generally oppose the idea of using inmate labor. What do you think?

2. For what reason is the state of Arizona currently soliciting public donations?

3. a) How long is the U.S.-Mexico border?
b) How many miles of the border are in Arizona?
c) What is significant about Arizona’s border with Mexico?

5. a) When debating the border fence bill (SB1406), Republican Senators said the state has a legal and moral obligation to take action because the federal government hasn’t done enough to secure the border. Do you agree or disagree? Explain your answer.
b) Ask a parent the same question.